One of the BIGGEST challenges facing the Yogi government

Those who like to draw comfort from the fact that UP is the country’s third-largest state in terms of the size of its economy should also note that its growth rate is one of the lowest, its per capita income is almost half of the national average and its poverty rate at 30 per cent places it at the twentieth rank among all the states, says A K Bhattacharya. 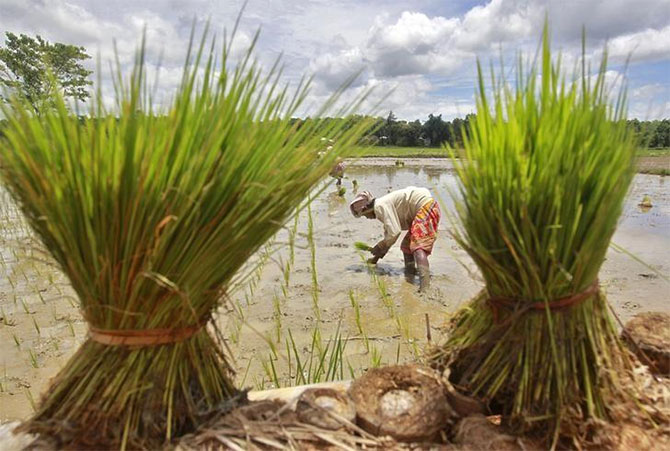 After a thumping electoral victory comes the responsibility of living up to voters’ expectations and fulfilling the promises made to win such a massive mandate.

We are talking about Uttar Pradesh, where the Bharatiya Janata Party (BJP) has won more than three-fourths of the state’s 403 Assembly seats. It is obvious that the new government in UP will have to be acutely conscious of this huge responsibility. So, what are its key economic challenges?

The biggest challenge will arise from the poll promise made by the BJP that all farm loans in the state will be waived. What is worse, all loans to farmers will carry a zero rate of interest.

Latest data on the amount of outstanding farm loans in Uttar Pradesh are not available. Till about two years ago, the total outstanding loans to farmers in the state were estimated at Rs 75,000 crore (Rs 750 billion). Of this, Rs 8,000 crore (Rs 80 billion) of loans were accounted for by state cooperative banks and the remaining by regional rural banks and commercial banks.

The challenge arises not just from the amount of loan that has to be written off, but from the procedures to be followed in fulfiling the patently populist promise by the BJP.

Who will take the hit as a result of the promised farm loan waiver? The burden cannot be borne by either the commercial banks or the cooperative and regional rural banks. So, at the very start of a new regime, the state exchequer seems destined to suffer a big financial blow.

Undoubtedly, this will have adverse implications for the already strained finances of the UP government. Its fiscal deficit widened from 2.7 per cent of gross state domestic product (GSDP) in 2013-14 to 3.4 per cent in 2014-15.

It got worse in 2015-16, when the state’s fiscal deficit almost doubled to 5.85 per cent of GSDP. This was proposed to be reduced to about four per cent in 2016-17, but it is unlikely that the target will be met, thanks to the pre-poll pressure to spend more on various schemes and government salaries.

Those who like to draw comfort from the fact that UP is the country’s third-largest state in terms of the size of its economy should also note that its growth rate is one of the lowest (only half a dozen states grow at a lower rate than UP), its per capita income is almost half of the national average and its poverty rate at 30 per cent places it at the twentieth rank among all the states.

While this underlines the urgent tasks before the new UP government to improve the economic conditions of the people in the state, the dangers of waiving farm loans and offering fresh farm loans at a zero rate of interest become even more alarming.

One option, therefore, will be to back-load the fulfilment of the loan waiver promise so that its impact on the state’s finances is postponed and staggered over a longer period of time.

The second option will be to redefine the terms of farm loans at a zero rate of interest. This can limit the eligibility of those who can seek such loans and reduce the adverse impact on the state’s finances.

The third option will be to shift the focus of the government to four specific poll promises. These pertain to providing a toilet to each household in the state, 24-hour electricity supply to all its residents, a gas connection to each household and a bus service for each village.

The overall impact of a quick start to government work aimed at fulfiling these promises will be hugely beneficial for both the ruling party and the state’s economy.

This will give a boost to investment in the state, strengthen its infrastructure with better power availability and improve the rural economy. Similarly, bus services connecting each village will first require construction of roads and more toilets will improve health as well as hygiene conditions in the state.

Fulfiling these promises will of course require the state government to commit more financial resources. But spending more on such projects will be more rewarding than using the same resources for waiving farm loans which has adverse systemic consequences for fresh credit and the recovery climate.