'I never imagined that a doll would be made on me. It feels great to be recognised by Barbie,' says the World Para-badminton champion who was also honoured by Time magazine. There are amazing athletes who have everything going for them.

There are also athletes who succeeded despite all the odds stacked against them.

Manasi Joshi is a star from the second category. She overcame a life-altering injury to become a leading athlete.

Like any other youngster, she had her dreams after graduating in electronics engineering and joining an IT company. But fate had other plans.

In 2011, on her way to work on a motorcycle, she was hit by a car and had to have her left leg amputated.

Not one to give up, Manasi turned to her Plan B in life. "I had to learn and relearn everything," she tells Laxmi Negi/Rediff.com on the phone from Pune where she lives.

"Even basic things like getting up, walking to conducting daily chores and activities on my own, I had to learn from scratch. Whatever comes my way, I take it as an opportunity," she says.

Within months, she began playing badminton as part of her rehabilitation therapy. In 2019, Manasi was the World Para-badminton champion in the SL3 category, having beaten Parul Parmar for the gold in the 2019 BWF Para-Badminton World Championships in Basel, Switzerland. 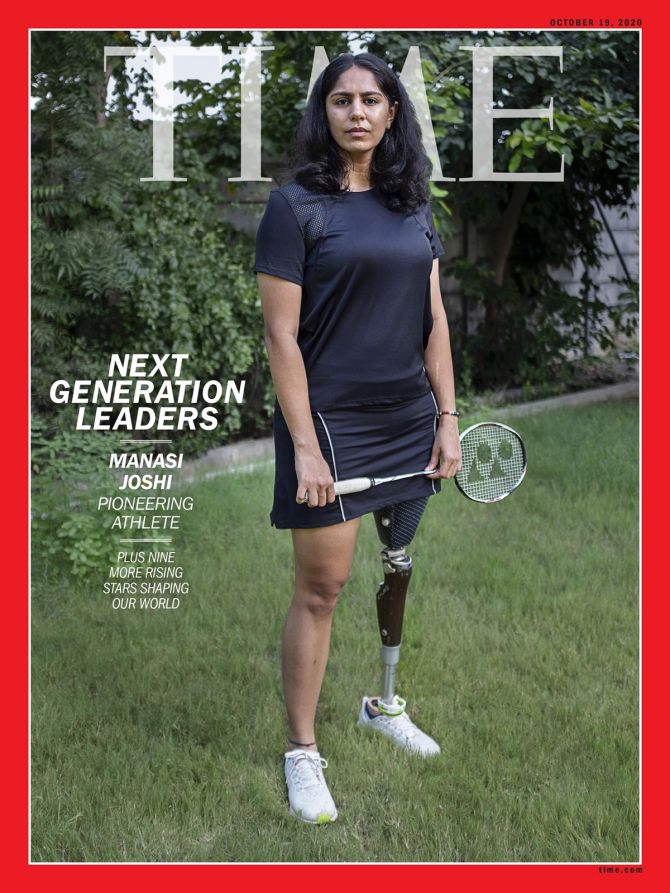 "It is a matter of great pride for me. Very few Indians get a chance like this," Manasi says of being featured on the cover of Time magazine's Next Generation Leaders issue.

She feels this recognition can change the stereotypes related to disability and adds, "This (the Time magazine cover) will change people's perceptions about so many things. It can change stigma associated to women and leadership."

"I hope this changes how people perceive para sports or disability in India."

"Disability is a huge spectrum. There are so many types that we cannot reduce people to just their disabilities," she points out.

"I want to spread awareness about how important to include people with disabilities. It is then people will realise that disability cannot restrict them to living their life to full potential."

"Getting a space on the Time cover or getting a Barbie one of kind doll modelled after me -- these are the things can change perception of people around disability," she says.

"So, inclusion is the next language that we have to be speaking." 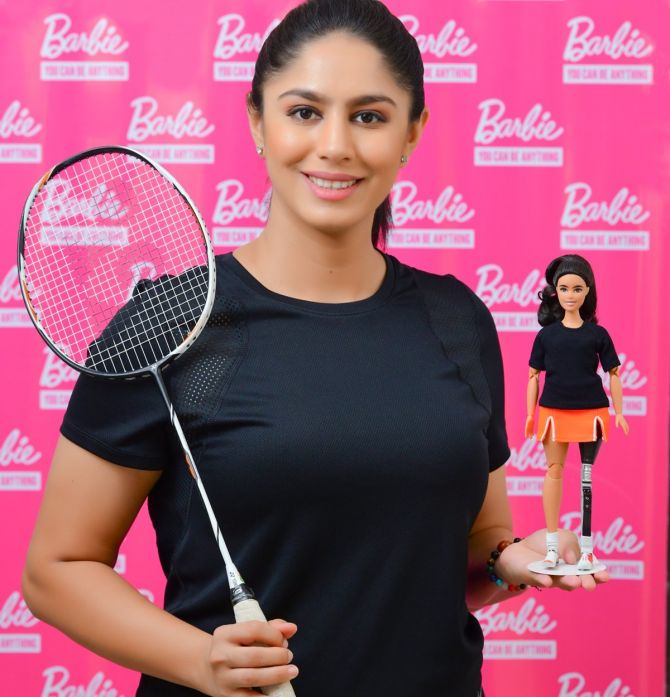 "I will keep raising my voice whenever I feel something is happening in the field of disability," says Manasi. "But, for now, I just want to be known as a sportsperson who is doing really good in her sport."

Manasi is now a part of Barbie Sheroes; a one-of-a-kind Barbie doll in her likeness has been created by Mattel Inc., the American toy company that owns the Barbie brand.

The only other Indian to have received this laurel is gymnast Dipa Karmakar in 2019.

"As a kid I used to play with dolls," recalls Manasi. "I never imagined that a doll would be made on me. It feels great to be recognised by Barbie."

"I would like to thank Mattel and Barbie to make such an inclusive doll," she adds. "This will make women and younger girls understand the importance of inclusion."

"Inclusion seeds will be sown in childhood," she asserts. "It is important for children and it is necessary for the new generation to speak the language for inclusion."

"Barbie has done great job in changing the perception and stigma associated with disability."

IMAGE: 'Wanted to share my new progress and personal achievement with you guys. I'm relearning this skill of running which I had forgotten. I know nobody forgets running, but running on a blade is nothing like running on legs. You need to learn the technicalities of it,' Manasi Joshi tweeted. Video: Manasi Joshi/Twitter

"After my accident, it was my dream to run again. And I did it." 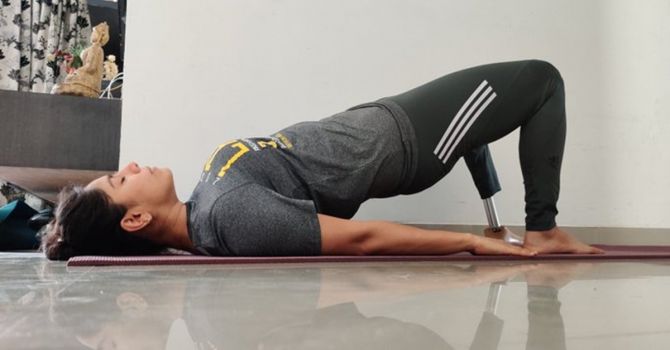 She would also like to use her engineering degree to help understanding of her sport.

"I have a lot of confidence on my equipment. Even the mechanics of the prosthetics and the ground reactions forces and everything regarding the prosthetic, the engineering has given me the confidence in the tech field."

"In terms of badminton I am still learning how the parabolic trajectory of the shuttle, how with different swings we can change the direction of the shuttle."

Manasi has not let the pandemic impact her training and is making use of this time to train for Tokyo Paralympics 2021. 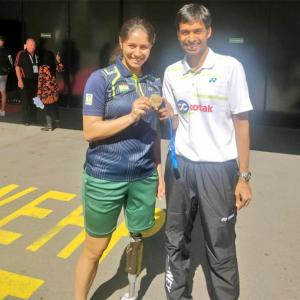