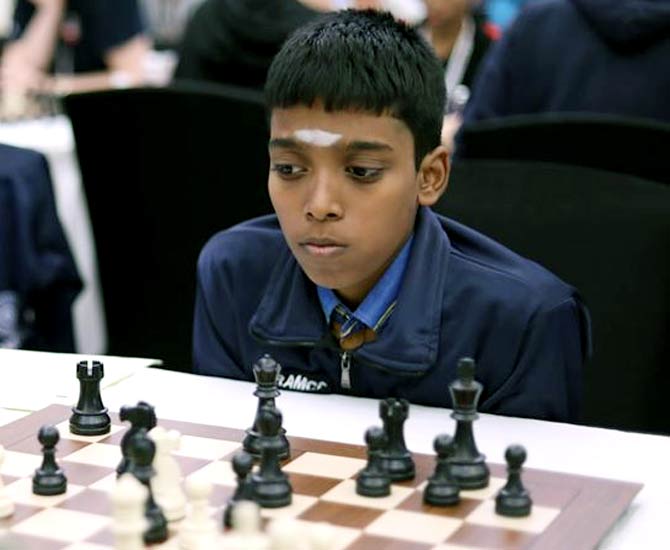 India's hopes in the Under-18 Open brightened as R Praggnanandhaa outclassed compatriot P Iniyan in the highly-anticipated battle between two Indian Grand Masters in the World Youth Chess Championship, in Mumbai, on Wednesday.

Playing black, Iniyan opted for the Pirc Defence, which was easily countered by Praggnanandhaa, forcing him into inaccuracies in the opening itself.

Praggnanandhaa kept increasing his advantage with every move and duly emerged victorious on move 38.

With this crucial win, Praggnanandhaa joined Iran's IM Aryan Gholami in the lead after the latter was made to settle for a draw by Indian IM Mitrabha Guha in 38 moves.

Top seed GM Sargsyan Shant of Armenia kept himself in the hunt by crushing George Stoleriu of Romania in 37 moves.

Meanwhile, untitled R Abinandhan's dream run continued in the Under-14 Open, storming into the lead with 7 points.

The 55th seed outwitted compatriot FM LR Srihari in a Queen's Gambit game to coast to a 40-move win.

Aydin Suleymanli (Armenia) had moved to the second place with 6.5 points, after settling for a draw against Marc Morgunov of Austria.

Top seed S Maralakshikari was in the next lot after one more draw.

In the Under-14 Girls, WIM Rakshitta Ravi (6.5 points) held on to her lead by forcing a draw on Russia's Ekaterina Nasyrova.

In the Under-16 Open, USAs IM Moke Hans Niemann held on to his lead, overcoming Miguel Soto (Colombia).

CM Mohan Kushagra moved up the ladder, beating compatriot Moksh Doshi to be in the third lot with 6 points.

Sixth seed WIM Vantika Agrawal split the point with Polina Shuvalova (Russia) to hold on to the second position in the leaderboard. 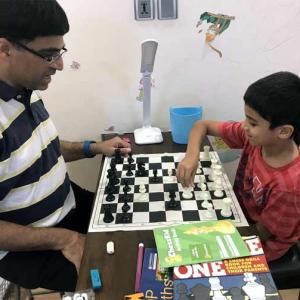