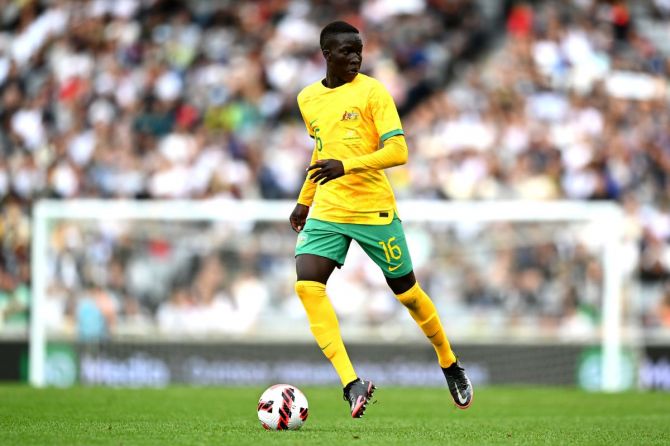 IMAGE: Garang Kuol of the Socceroos makes a break during the International Friendly match between the New Zealand All Whites and Australia Socceroos at Eden Park. Photograph: Hannah Peters/Getty Images

There was a lot of song and dance about how Australia scraped into the World Cup.

A so-called Wiggles dance made replacement goalkeeper Andrew Redmayne with his flailing arms and legs a public enemy in Peru, as he prepared to make saves in the penalty shootout, even becoming a meme as the Socceroos secured one of the last spots in Qatar.

With so much focus on Redmayne's routine in the last-ditch intercontinental playoff, two important elements of that victory following a game that finished 0-0 were overshadowed: Australia earned a place in soccer's marquee event for the fifth consecutive time, and did it by playing 80% of their qualifying games away from home.

Tough border laws meant the Socceroos didn't host any international games for more than two years. And so 16 of their 20 qualifiers were on the road in an extra-long campaign that started in September 2019 and culminated in Qatar in June with a 2-1 win over the United Arab Emirates in an Asian playoff game that gave them the shot in Peru.

The Aussies are already comfortable with the conditions in Qatar, where they were unbeaten in four qualifiers for 2022 and where they've won 10, drawn three and lost two games since 2008.

The Socceroos will open Group D against defending World Cup champion France in a familiar situation: Australia lost to France 2-1 in its opening group game four years ago in Russia. The Australians then play Tunisia before taking on Denmark, another group rival from 2018.

Players in the Australian squad are scattered around leagues on four continents, so long-distance travel for national team duties is a regular part of the deal.

Having 13 qualifying games in the Middle East this time around, mainly in Kuwait, cut down on travel time for the bulk of players based in Europe and Asia and allowed for more quality time when in camp.

The Australians had 13 wins, including 11 in a row, and four draws in the 20 qualifying matches. Home-and-away losses to Japan in the last round and a 1-0 loss against Saudi Arabia in Jeddah cost Australia an automatic spot in Qatar, forcing them down the playoff route.

Four years after guiding South Korea on a surprising run to the World Cup semifinals on home soil, Guus Hiddink helped Australia reach the second round at the 2006 World Cup in Germany.

Australia's Golden Generation advanced behind Brazil from the group with a 3-1 win over Japan and a draw with Croatia but lost to eventual champion Italy 1-0 on a contentious stoppage-time penalty in the round of 16.

That remains Australia's best performance at the World Cup. In the last two editions, the Australians haven't won a game. Hiddink was only too happy to help coach Graham Arnold, his assistant during the 2006 World Cup, fine-tune the squad during a September camp ahead of two friendlies against New Zealand.

“I had an emotion because it kind of revived what we did at that time,” Hiddink said of Australia's dramatic qualification, saying he didn't mind a bit of payback.

There have been local concerns about the lack of playing time for some of the veteran Socceroos, including captain and goalkeeper Mat Ryan at Copenhagen.

The two warm-up wins over New Zealand in September gave Arnold a chance to get his veterans back in camp for one of those games and he gave some of the younger talents a chance in the other.

Among them was 18-year-old Garang Kuol, who went on as a substitute in Australia's 1-0 win in Auckland before he had started a professional match. His appearances off the bench for an A-League invitational team against Barcelona and the brief run for Australia gained plenty of attention.

Former Socceroo Robbie Slater said Kuol, who was born in Egypt to Sudanese parents and moved to Australia as a child, had the X-factor that would make it hard for selectors not to pick him for the World Cup.

“Every time he touched the ball, he made something happen. The kid's exciting. Everyone can see that. Everyone is buzzing,” said Slater, now a media analyst. 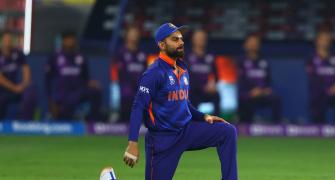 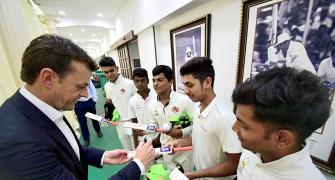 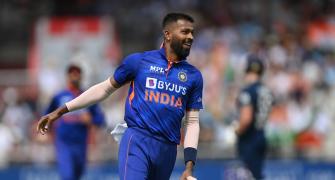 Hardik on 'Mankading': To hell with spirit of game! 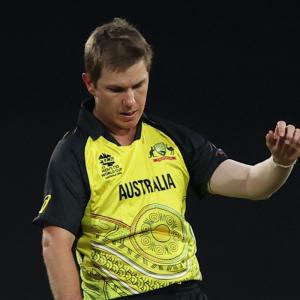 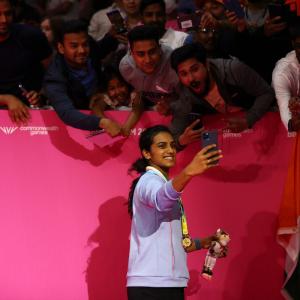