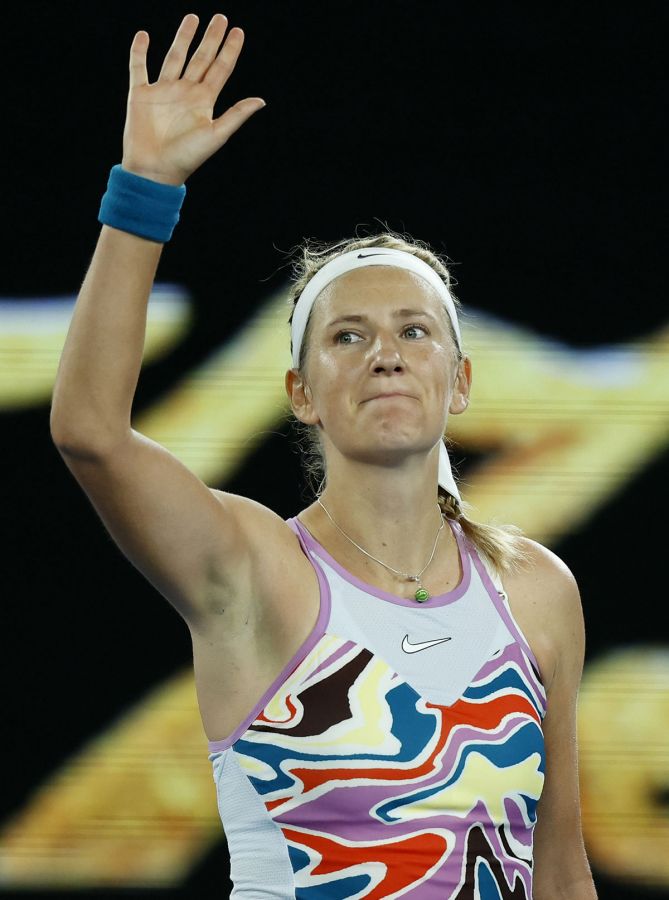 IMAGE: Victory marked the first time in a decade that Victoria Azarekana had made it to the last-four at the Australian Open. Photograph: Darrian Traynor/Getty Images

Victoria Azarenka rolled back the years at the Australian Open on Tuesday as the two-times champion crushed third seed Jessica Pegula 6-4, 6-1 to reach the semi-finals and remain on course for her third Grand Slam crown.

Victory marked the first time in a decade that the 33-year-old had made it to the last-four at Melbourne Park and she will make her first appearance in a major semi-final since the US Open in 2020 where she went on to lose in the title clash.

"Well, it hurts to beat her because I always want her to do well, but the same time I know I have to play my best tennis," Azarenka said of her friend and practice partner Pegula.

"She's been playing amazing, very consistent and I knew from the first point I have to bring it.

"We had so many rallies and I wanted to try to stay there, take opportunities because she was going to take everything if I don't try to win myself and I'm very proud that I executed my game plan really well." 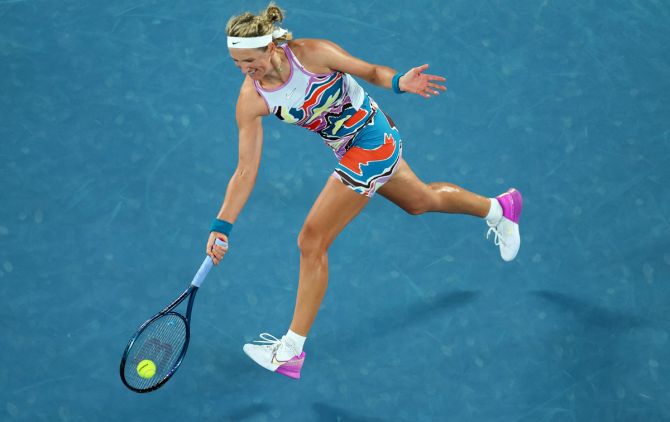 IMAGE: This is Victoria Azarekana's first appearance in a major semi-final since the US Open in 2020 where she went on to lose in the final. Photograph: Darrian Traynor/Getty Images

Azarenka, the last woman to defend the Australian Open title after her 2013 triumph, played superbly to race into a 3-0 lead over American Pegula in the first set before the highest seed left in the women's draw finally held serve.

Pegula found her rhythm playing closer to the baseline and controlling the rallies to break back, but Belarusian Azarenka found another gear to move ahead in the contest before both players failed to hold serve in the next.

Former world number one Azarenka took the decisive lead, however, and closed out the match to set up a semi-final meeting with Wimbledon winner Elena Rybakina after the Kazakh 22nd seed beat former Roland Garros champion Jelena Ostapenko.

"It's so amazing to be in the semi-final of another Grand Slam," Azarenka said. "I felt especially last year my tennis wasn't bad but I wasn't really mentally there to go out there.

"I worked a lot on my mindset, challenging myself on things that I wouldn't really do before and try to push myself forward.

"Because when you achieved great success, sometimes you become conservative and you're a bit more hesitant to try new things. This off-season I was like I'll just be open-minded trying new things and put my head down and work hard." 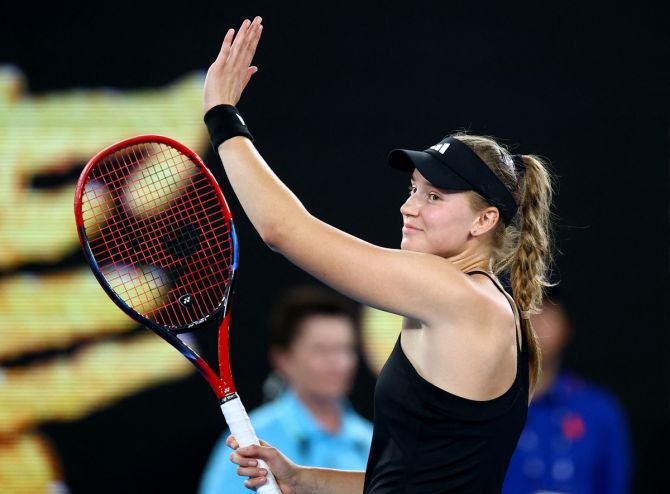 IMAGE: Kazakhstan's Elena Rybakina waves to the stands as she celebrates winning her quarter-final against Latvia's Jelena Ostapenko at the Australian Open, at Melbourne Park, on Tuesday. Photograph: Hannah Mckay/Reuters

The Russian-born Kazakh looked sharp from the start and only a 25-minute delay to close the stadium roof against a passing shower prevented her from wrapping up the opening set within a half-an-hour of arriving on court.

Former French Open champion Ostapenko looked unable to cope with Rybakina's pace and power in the opening stanza but ramped up her own fierce groundstrokes to break for a 2-0 lead at the start of the second.

Rybakina, who ousted top seed Iga Swiatek in the fourth round, broke straight back, however, and saved four break-points with some brilliant tennis in the next game to consolidate.

The 23-year-old rode the momentum to break her Latvian opponent again for a 3-2 lead and then it was only a matter of looking after her impressive serve.

There were some jitters as Rybakina served for a place in her second Grand Slam semi-final but she sealed the deal on her third match point with her 11th ace of the contest. 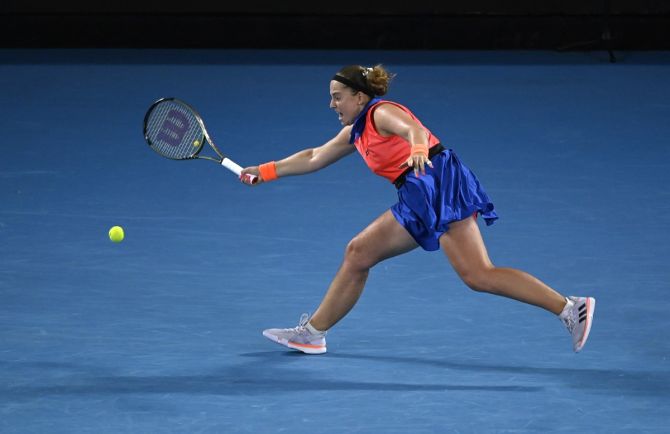 "I'm super happy to be in the semi-finals for the first time," said Rybakina. "Of course, I was nervous, particularly in the last game, but I'm happy I managed my emotions. I played really well today."

Ostapenko was clearly second best but might take solace at her best Grand Slam showing since she reached the Wimbledon semi-finals in 2018, a year after she won the Roland Garros title.

Rybakina, seeded 22nd only because ranking points were not awarded at last year's Wimbledon, will next play the winner of Tuesday evening's quarter-final between third seed Jessica Pegula and twice Melbourne Park champion Victoria Azarenka.

"For sure, I'm going to watch it," she said. "But at the same time, I need to forget about tennis just for a few hours, to rest the mind, then prepare for another tough match." 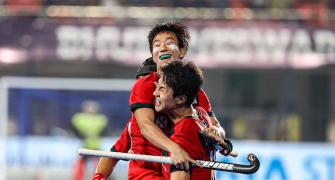 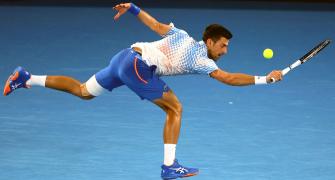 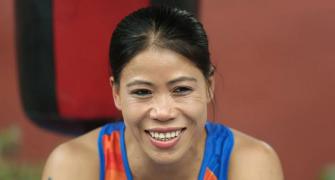 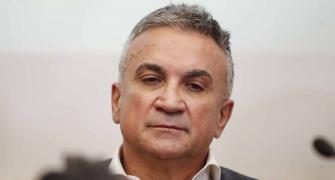 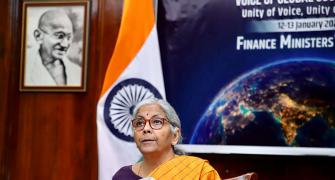 Is it time for an Indian inheritance tax? 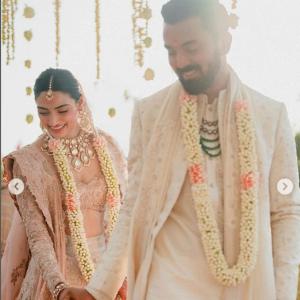 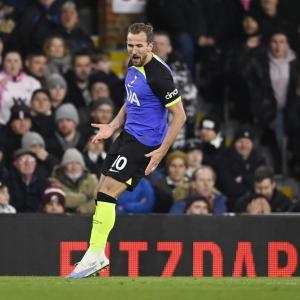