Inter Milan's Nicolo Barella scored one goal and set up another to help secure a 2-0 ‘Derby of Italy’ victory over champions Juventus and send his side joint-top of Serie A while putting a major dent in the Turin club's title hopes.

Former Juve midfielder Arturo Vidal scored his first league goal for Inter when he headed in an inviting Barella cross after 12 minutes.

Antonio Conte’s side grabbed a deserved second after the break when Barella raced onto a long Alessandro Bastoni pass and finished clinically into the top corner, after which the victory was never in doubt as Juve failed to threaten a comeback.

It was Conte’s first Serie A win on his fourth attempt against the club he previously represented as a player and coach, and the result leaves Inter level on 40 points with league leaders AC Milan, who visit Cagliari on Monday.

Juventus have a game in hand over Inter but are fifth with 33 points, leaving Andrea Pirlo's side with a lot of ground to make up in their quest for a 10th consecutive Serie A title.

"Juve have won the Scudetto for many years, but we've shown we're at the level to fight for the title," Vidal told Sky Sport.

"This success gives us the confidence to continue working hard and thinking about winning the league. We think we can go all the way." IMAGE: Cristiano Ronaldo, who was reduced to speculative efforts from distance, tries to get past Alessandro Bastoni. Photograph: Marco Luzzani/Getty Images

The match was widely billed as a contest that would be decided by Inter’s Romelu Lukaku or Juve’s Cristiano Ronaldo, but it was 23-year-old midfielder Barella who shone brightest.

The Italy international’s teasing cross left Vidal with a simple header from close range to open the scoring.

Barella then released Lukaku on a counter-attack and the Belgian's shot was parried by Wojciech Szczesny before being blazed over on the rebound by Lautaro Martinez.

Juventus approached the match as the team in form after winning three consecutive league games, but Pirlo’s side struggled to break down the home defence and Ronaldo was reduced to speculative efforts from distance.

Barella got his goal when he hared after a 60-metre pass by Bastoni to finish in the 52nd minute, while Martinez was close to making it three when his curled effort flew wide.

Juve finally summoned a chance of note with three minutes remaining when Samir Handanovic produced a one-handed save to keep out a powerful Federico Chiesa effort, but it was too little too late. IMAGE: Barcelona's Lionel Messi walks off the ground after being shown the red card in the final of the Spanish Super Cup against Athletic Bilbao on Sunday. Photograph: Marcelo Del Pozo/Reuters

Lionel Messi was sent off for the first time in his Barcelona career in the closing stages of extra time as they lost 3-2 to Athletic Bilbao in the Spanish Super Cup on Sunday.

Messi, who returned to the starting lineup after missing the semi-final victory over Real Sociedad through injury, was dismissed after striking Asier Villalibre in the final minute.

The Argentine had been heavily involved in a more positive way as Barca took the lead five minutes before the break.

Messi's goalbound effort was blocked, falling to the feet of Antoine Griezmann, who netted the first of his two goals.

Raul Garcia's header was disallowed for offside by VAR after the restart as Bilbao had the better chances in a tense affair. 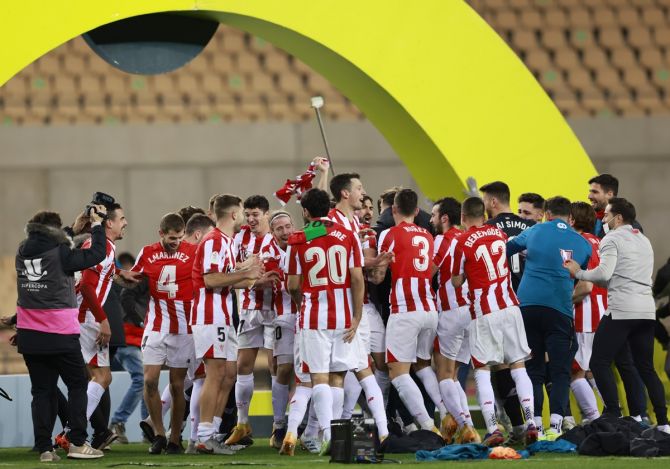 However, French forward Griezmann looked to have won it for the Catalans with a goal against the run of play 14 minutes from time, only for substitute Villalibre to volley home in the 90th minute to send the game into the extra period.

Three minutes into the additional half hour Williams curled a stunning effort into the far corner from the edge of the box to give Bilbao the lead for the first time in the tie.

"What a goal it was!," said beaming Bilbao coach Marcelino. "It was a great piece of skill and you couldn't produce a better finish.

"In general I don't think Barca deserved to take the lead, especially in the first half, anyway.

"The lads were so focused on this game and I'm so proud of them. They make your job easy and enjoyable."

Marcelino was only named as coach this month after Gaizka Garitano was dismissed, and the 55-year-old has now beaten Barca in the last two finals they have reached after his success over them with Valencia in the 2019 Copa del Rey final.

"It's going to be impossible to keep up that record," he said. "I don't know how many semi-finals I had to play before actually reaching a final, I think it was eight, but now I've won in two finals."

A third Super Cup title is Bilbao's first silverware since they claimed the same trophy in 2015 with a 5-1 aggregate win over Barcelona. Thomas Mueller set up one goal and scored a second-half winner as Bayern Munich struggled past Freiburg 2-1 on Sunday to snap their opponents' five-game winning run and extend their lead at the top of the Bundesliga to four points.

Bayern, who were eliminated in the German Cup by second division's Holstein Kiel in midweek after losing to Borussia Moenchengladbach in the league, have now conceded at least one goal for the 11th straight league game and were far from impressive.

The win, however, lifted them to 36 points, four ahead of RB Leipzig who drew 2-2 with VfL Wolfsburg on Saturday, and seven clear of Bayer Leverkusen and Borussia Dortmund in third and fourth places.

"It was a hard earned win," said Bayern defender Jerome Boateng. "But we need to improve. It was a nervous finale and it was our fault. But we kept fighting."

"It is about winning games. We don't have to be shine every time."

The Bavarians went ahead after seven minutes as Robert Lewandowski became the first Bundesliga player to score 21 goals in the season's opening 16 matches.

The Pole is chasing Gerd Mueller's 40-goal record haul in one season that dates back to the 1971/72 season.

Eager to bounce back from their two straight losses in the league and the German Cup, the hosts came agonisingly close to a second goal early in the second half with Lewandowski hitting the crossbar and Leon Goretzka's rebound spectacularly palmed wide by keeper Florian Mueller.

Freiburg struck against the run of play from substitute Nils Petersen's first contact with the ball, a diving header at the far post in the 62nd minute for a record-extending 28th league goal as a substitute.

Thomas Mueller snatched the winner in the 74th, drilling in a shot after a Leroy Sane layoff from Kingsley Coman's cross before Freiburg's Petersen rattled the crossbar with a thundering shot in stoppage time.

Real Madrid outcast Luka Jovic scored twice on his return on loan to Eintracht Frankfurt for a 3-1 victory over Schalke 04.

The Serb, who joined until the end of the season, scored his first goal with a quick break after teenager Matthew Hoppe had levelled for Schalke -- his fourth goal in two games -- following Andre Silva's lead.

Jovic added a second with a powerful shot in second half stoppage time to lift Frankfurt to seventh on 26.

© Copyright 2022 Reuters Limited. All rights reserved. Republication or redistribution of Reuters content, including by framing or similar means, is expressly prohibited without the prior written consent of Reuters. Reuters shall not be liable for any errors or delays in the content, or for any actions taken in reliance thereon.
Related News: Nicolo Barella, Bayern Munich, Arturo Vidal, Inter Milan, Freiburg
COMMENT
Print this article 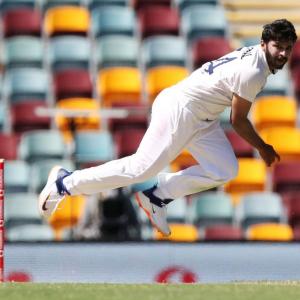