PIX: Ronaldo reaches another landmark to fire United to win

Cristiano Ronaldo is now 10 goals ahead of Lionel Messi.

Cristiano Ronaldo came off the bench to earn Manchester United a hard-fought 2-1 victory at Everton in the Premier League on Sunday, taking his career goal tally to 700 in the process.

Just as United did last weekend in their derby mauling at the hands of local rivals Manchester City, they again found themselves behind early on at Goodison Park after Alex Iwobi curled a sublime strike into the net from 20 metres.

The visitors, however, responded much better this time around and soon levelled things up as big-money signing Antony slotted home, the Brazilian becoming the first United player to score in his first three Premier League appearances.

Substitute Ronaldo then entered the fray unexpectedly early after Anthony Martial picked up a back injury and took only 14 minutes to score his first Premier League goal of the season, his 144th for United across two spells. United striker Marcus Rashford thought he had made doubly sure of a fifth win in six league games for the visitors late on but his effort was ruled out after a VAR review for handball against the England forward.

Everton never really looked like finding a late equaliser as United held on for a victory that moved them up to fifth on 15 points, nine adrift of leaders Arsenal. Everton's first loss in seven league matches leaves them 12th on 10 points.

"I am really happy because he has been working hard to get this goal. Today he got the goal and the win and that is the most important for him, that the team won."

Everton have improved of late, winning their previous two league games after only one victory in their 10 before that, with the confidence oozing as they took the game to United.

Alex Iwobi is enjoying a fine season in the heart of the Everton midfield, having previously played as a winger, scoring his first ever Premier League goal from outside the box to nearly lift the roof off a damp Goodison.

Defensive errors, however, are still all too prevalent at Everton, with Idrissa Gueye caught on the ball by Fernandes, before Martial fed Antony for United’s well-worked equaliser.

Other than Iwobi's fine strike, Everton did not muster another attack in the opening period, with United's Christian Eriksen and Martial denied by smart saves from Jordan Pickford. Martial's match did not last much longer, though, as he was replaced by Ronaldo, limping off after picking yet another injury in a frustrating season.

Ronaldo's crucial strike had a familiar feel to it as his former Real Madrid team mate Casemiro, making his first Premier League start, slotted him through, and the 37-year-old's powerful strike did the rest.

United had chances to add to their total after the break, but Eriksen and Rashford fired off target from good positions.

Buoyed by their VAR reprieve, Everton did threaten the United goal, with substitute and former United midfielder James Garner denied by an athletic De Gea save.

However, the visitors saw out the 100th Premier League game they have won after conceding the first goal - the most such wins in the competition's history.

"It was disappointing because we had been moving in the right direction," Everton manager Frank Lampard told BT Sport.

"United had good possession and moved the ball well. There's a lot I can reflect on in the game but when you look at it in the cold light of day it was two of our mistakes that led to goals." 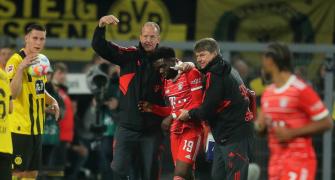