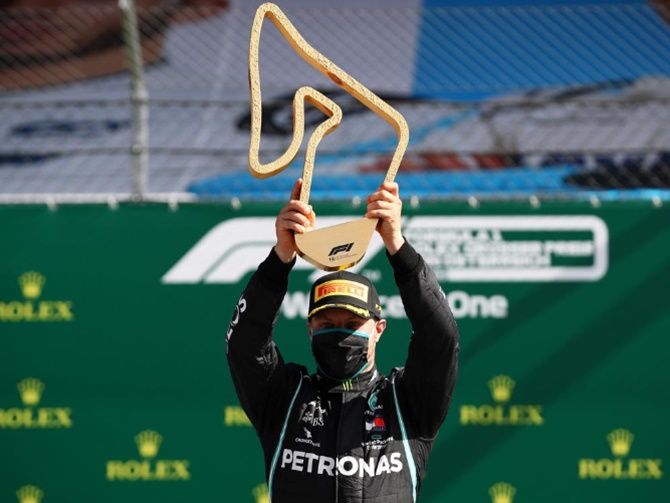 IMAGE: Mercedes' Valtteri Bottas celebrates with the trophy on the podium after winning the race, as F1 resumes following the outbreak of the coronavirus. Photograph: Mark Thompson/Reuters

Formula One came back with a bang, on Sunday, as Finland’s Valtteri Bottas won a dramatic Austrian season-opener for champions Mercedes in a race with only 11 finishers and no spectators.

“I managed to keep it together and control the race from my side and it’s a good start to the season,” said Bottas, who started on pole position and had to keep his cool through three safety car periods.

Norris, at 20 the youngest driver in the race and now the youngest Briton to stand on an F1 podium, also claimed a bonus point for fastest lap.

The race, on a sunny afternoon at the scenic Red Bull Ring was behind closed doors — a Formula One first — due to the COVID-19 pandemic that had put the season on hold since March.

The drivers gathered on the grid before the start in a show of unity against racism, with Hamilton and 13 others taking a knee in solidarity.

Spaniard Carlos Sainz made it a double points haul for McLaren in fifth, with Sergio Perez sixth for Racing Point and Pierre Gasly seventh for AlphaTauri.

Esteban Ocon, who last raced in 2018, took eighth for Renault on his return while Antonio Giovinazzi bagged ninth for Alfa Romeo and Sebastian Vettel, who had another nightmare, completed the top 10 for Ferrari.

Canadian Nicholas Latifi was the last car running with 11th for Williams.

There was drama even before the race when stewards performed a U-turn after a Red Bull challenge and dropped Hamilton from the front row to fifth on the grid for a qualifying error.

That also promoted Red Bull’s Max Verstappen to the front row alongside Bottas.

Any hopes the Dutchman had of completing a hat-trick of Austrian wins disappeared when he suffered an early technical problem and became the season’s first retirement.

The first safety car was deployed when Haas’s Kevin Magnussen spun off on lap 26 and it then came out again when George Russell parked up his stricken Williams.

The third was after Kimi Raikkonen’s Alfa Romeo turned into a three-wheeler, a loose wheel bouncing off and across the track.

Bottas had Hamilton in his mirrors soon enough but the Briton was handed a five-second time penalty for causing a collision with Red Bull’s Alex Albon while defending second place.

The Thai spun off into the gravel, his podium hopes gone.

“It’s not been a great weekend for me, yesterday was entirely my fault and to get a penalty today... it is what it is,” said Hamilton.

Leclerc, whose team had struggled in qualifying with Vettel failing even to make the top 10, moved up to third against all expectations — which became second after the chequered flag.

“It feels like a victory today,” said the Monegasque.

Perez, who ran as high as third, lost out to Norris two laps from the end but the Mexican was already carrying a time penalty for speeding in the pit lane.

Anyone who had feared Mercedes enjoying a race of their own, after dominating practice and qualifying, need not have worried. They fretted over gearbox sensors and possible kerb damage as he race wore on.

The second race is at the same circuit next weekend, another Formula One first.