Pele's Story Is A Story Of Hope

More than the story of any other footballer or athlete, Pele's life helped democratise his sport; made it the stuff of a widely shared dream.
Shyam G Menon salutes the memory of the greatest footballer ever. 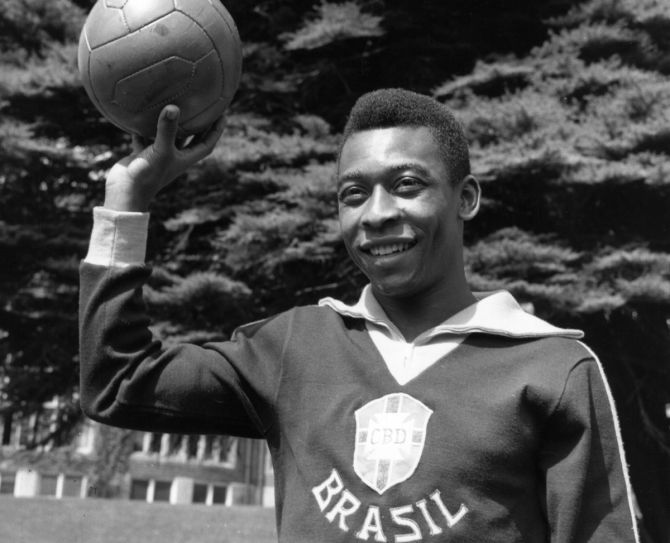 Decades ago in school, one's study of Malayalam tended to enter a new league around the seventh or eighth standard.

At this stage, the regular text book received an adjunct -- a supplement -- that introduced students to longer text in the form of essays and travelogues.

One chapter therein, I remember, dealt with a certain Edson Arantes do Nascimento, his ascent in the world of football and detailed accounts of some of the goals he scored.

Needless to say, in the context of India's rote education, we were expected to know by heart, every twist, turn and flick that went into the structuring of these goals and regurgitate it during exams.

That was the closest I got to Pele, a name known well by youngsters those years in Kerala, even before they reached high school, but understood better through such chapters.

There was another similar encounter with football from the academics of school years. It was a narration about a match between two English football clubs -- one of them, Arsenal; the other, I forget -- played on a portable record player, which we had to listen to, during lessons around proper pronunciation of the English language. 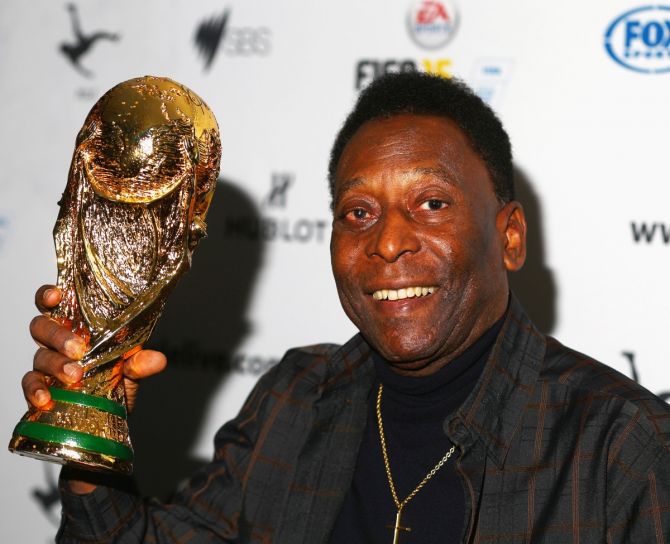 Between the above said two instances, Pele stuck in mind more. But it was only in late December 2022 following news of the legend's demise that the real significance of Pele in my generation's time on the planet, struck home.

Many athletes have left an indelible mark on their sport.

Mark Spitz brought swimming into the record books with his rich haul of Olympic medals.

Nadia Comaneci's perfect ten in gymnastics made the world sit up and take notice.

Usain Bolt and Eliud Kipchoge changed running as we know it. The former by his incredible speed; the latter by his capacity to sustain speed over a great distance.

Dick Fosbury rewrote the high jump. The style of jumping he pioneered changed the discipline forever.

There have been so many similar other innovations in sports and games. But they have mostly been in the realm of technique. And when it was something more -- something that appealed to the requirement of the human being to feel inspired -- the scale of the sport concerned, wasn't enough to add scale to the impression. 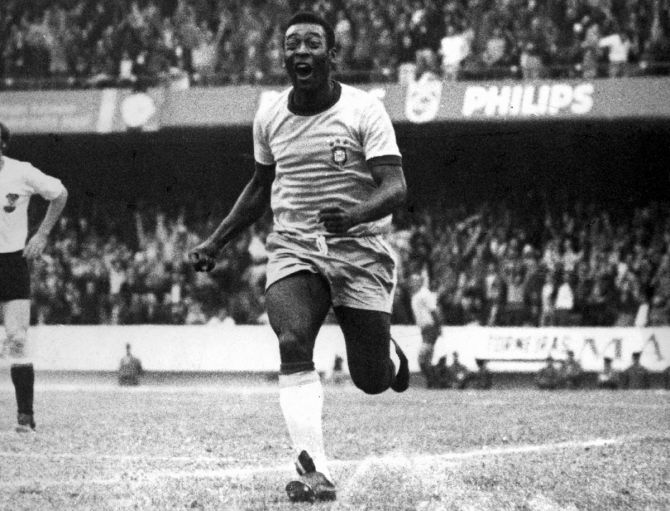 IMAGE: Precisely how many time Pele hit the net is a matter of debate, with most statisticians agreeing the number is between 1,281 and 1,283. Photograph: Action Images/Reuters

Football's delightful simplicity and raw appeal has made it the world's most followed sport.

In football, there is none of the Indian trait of claiming scale because the world's most populous region is addicted to a given sport.

Engaging for player and spectator alike, football will fascinate even if played at a tiny human colony on Mars. It is part of humanity's footprint; something destined to be discussed centuries later when a future generation of related or unrelated biology, sifts through the remains of our species' culture and civilisation.

Pele not only existed in the realm of excellence in football, but unlike any other athlete, the Brazilian great came to define his sport.

For millions around the world, football became what Pele made it mean. And that meaning which he gave the game, although rooted in his talent as footballer, gained wings due to one simple attribute in the narrative. An attribute that appealed more universally than football itself -- the predicament of the underdog. 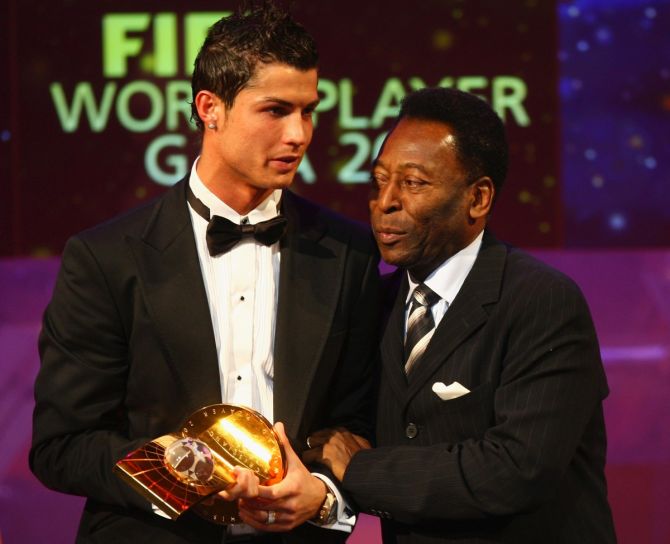 Pele's is a story of coming in from nowhere and making it big in life. He grew up in poverty.

Compared to today's youngsters growing up in a world of televised sports, wealthy football stars, icons of success to emulate and parents willing to move heaven and earth to ensure success for their children, Pele's life was abjectly different.

It was from such humble background that he rose to be part of Brazil's national football team and eventually, the greatest footballer the world has known yet. 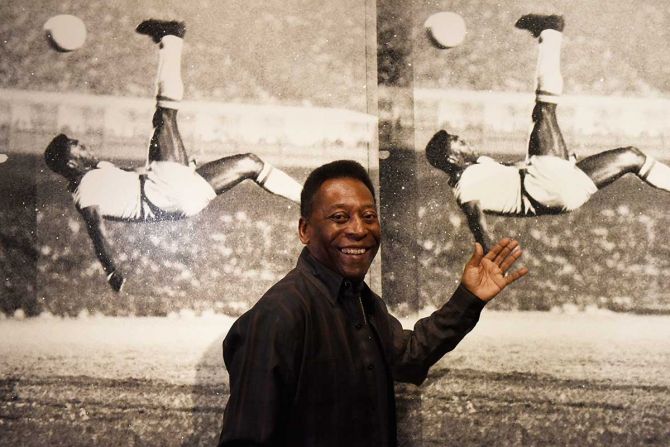 IMAGE: Pele he launches Art, Life, Football at the Halcyon Gallery in London, September 22, 2015.
In the action picture the legend makes an attempt on goal with an athletic overhead kick during a friendly international at the Maracana stadium in Rio de Janeiro, Brazil, June 2, 1965. Photograph: Mary Turner/Halcyon Gallery/Getty Images

More than the story of any other footballer or athlete, Pele's life helped democratise his sport; made it the stuff of a widely shared dream.

By Pele's time, football was already established as a working man's sport.

Further, South American football represented the ascent of the underdog in the game.

Pele became the ambassador of such aspirations and within the world of sport, football became the discipline most widely associated with barrierless access and possibility of ascent through sheer excellence. As the track record of football's various associations and their drift to commercialisation show, the reality of the sport may have been quite different. But through all that and for all seasons, the story of Pele spelt hope.

Aside from the inherent simplicity and appeal of the game and its fantastic competitions, if there was another factor that contributed strongly to making football, the popular global sport it is today; it would be Pele. They say everyone is finally understood for what they are, at the time of demise. IMAGE: Pele waves to the spectators before the start of the under-17 boys' final of the Subroto Cup tournament at the Ambedkar stadium in New Delhi, October 16, 2015. Photograph: Anindito Mukherjee/Reuters

As per the Internet, Brazil is around 14,000 kilometres away from Kerala. Pele's death was reported prominently in the media, in the football-crazy state.

Late evening December 30, at the Law College Junction in Thiruvananthapuram, passersby (among them I) were treated to a picture of Pele kept by the roadside; a couple of rows of candles, lit before it. 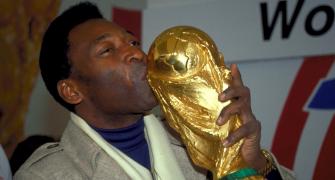 How Pele took Brazil to summit of world football 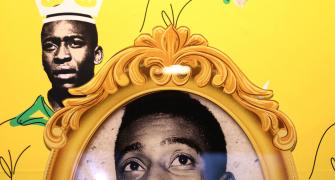 RIP Pele: 'The most divine of footballers' 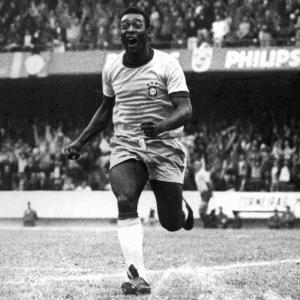 The greatest of all time, finally together in heaven