'Queen's mural is going to stay here for years and years to come.' 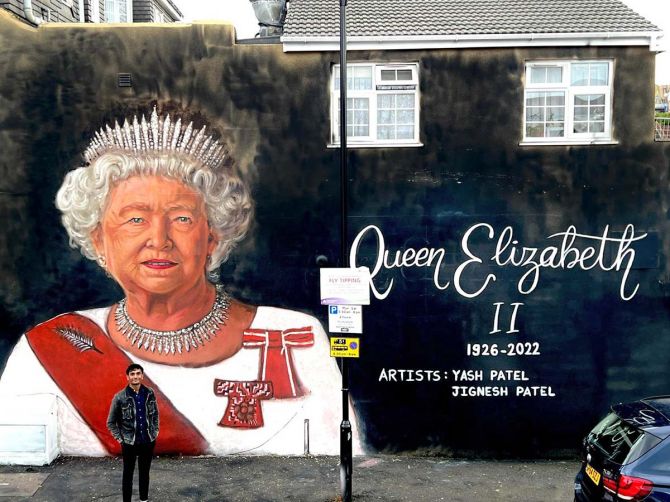 IMAGE: Yash Patel with the queen's mural in the background. Photographs: Yash Patel and Jignesh Patel

If you take the Piccadilly Line tube from London Heathrow to the city centre, hardly four stops out you will be at Hounslow East, one of three stations serving the heavily-populated ethnic district of Hounslow, which is actually not just a part of a London borough but a wondrous microcosm of the world and whose mayor is Nepal-born Bishnu Gurung.

Exit the station, walk hardly two steps ahead and you will be looking smack bang at a giant mural of a perhaps faintly and gently smiling Queen Elizabeth II, still smelling of fresh paint.

Is there an Indian connection?

Yes, indeed. Well, the late queen had a tonne of India links, like for instance her father, George VI was the king emperor of the British empire when India won Independence, but in this case the names of the artists in the centre bottom of the mural are it. 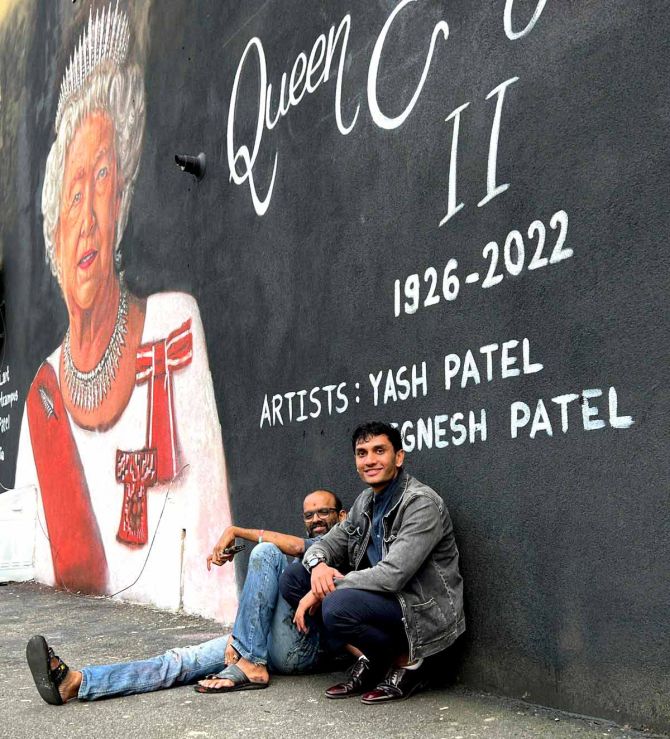 They are the two artists and interior designers, with a studio in Hounslow, who literally overnight painted the over-sized, heartfelt wall tribute to the queen and suddenly gained a somewhat bemusing special moment in the sun.

Chasing down Jignesh and Yash is an arduous task and Yash, who is the spokesman for them both, finally apologises with the message: 'Sorry mate, we have been slow to reply. We're stuck in work, but to be honest with you, I'd love to help you but to be frank, I don't know if I can trust your account. Please don't mind if you're serious about this (as we) have had lots of fraudulent accounts reaching out to us after the painting'.

The duo has fielded a crazy flurry of calls, messages and posts from all over the place, some bogus from 'fraudsters' and 'scammy accounts', a few insulting, and given interviews to the Polish media, the Indian media and some other European media -- Yash can't even keep track. What they planned to achieve via the 10 metres by 8 metres mural, dedicated to the queen, has given them handsome and unexpected returns.

They had not bargained on the news of the mural, they had worked on, going 'viral'.

"Because of all the media that we've been put in front of, it's just become a bit overwhelming for the past couple of days, if I'm honest, because we had no clue this would reach national news and international news, as well. But I am not too fazed by all of this. I guess I'm enjoying it while it lasts."

Yash and his mentor "Jigneshbhai" -- who have done street murals before, including one of Vincent van Gogh and also created a Guinness record with the bubble wrap masterpiece they did with local kids during COVID-19 to raise money for orphans in India -- always had plans to honour the queen with an extraordinary mural, maybe in her jubilee year, well, partly because murals help artists establish themselves.

Before their plans could reach fruition, Elizabeth II passed away.

The aura of mourning or "sorrow," that has shrouded Britain, the whole of London, including Hounslow ("regardless of where people have come from") is palpable, very real and "affects everyone's emotions," says Yash.

It was the "gloomy mood" and "environment" of sadness that spurred them to go ahead and conceptualise and execute the mural in her memory.

Says the earnest and cheerful Yash, "I think she, to some extent, did make it possible for loads of people to live in harmony within the United Kingdom. I think she brought people together." 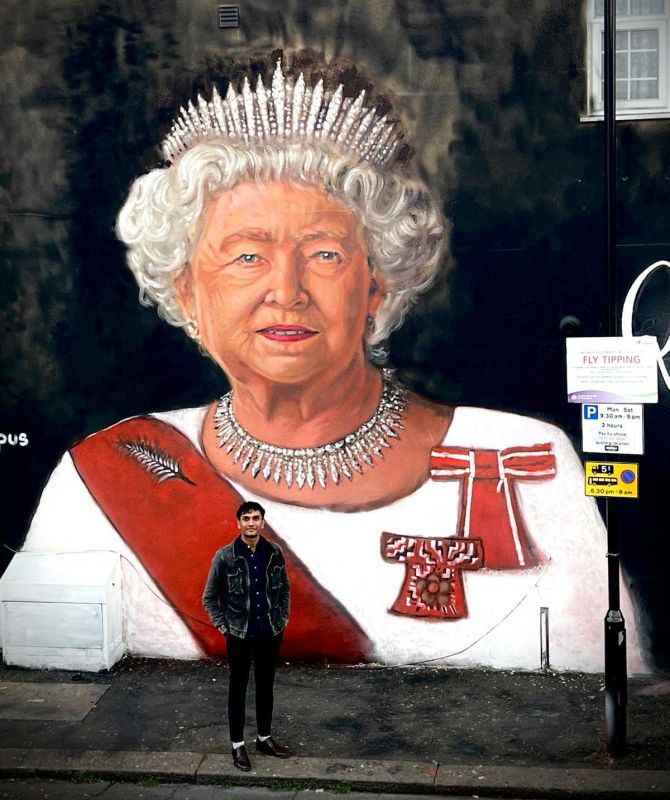 One of the reasons for painting her majesty is, explains Yash, "obviously to pay tribute to the queen" not just on their behalf but on the community's behalf -- "a way of remembrance."

Neither Yash, 19, a Wembley resident born in Gandhinagar, Gujarat, and who came to the UK when he was five or six and is about to enter University College London to study architecture, nor his creative partner Jignesh are flush with funds.

To start the mural, they had to take local council permission, get okays from Hounslow community forums and come up with the 10-15 litre-buckets of wall paint of various hues required to begin work.

Getting the right permissions was not difficult.

The administrators of the locality swiftly realised that a mural, like the one Yash and Jignesh were thinking of, would bring prestige to the area and footfalls that would help local businesses and the artist duo was offered a choice of wall spaces to use by various borough landlords.

They carefully selected a picture of the queen that had no "political" angle.

"There were loads of pictures we could have chosen of the monarch in her royal garments, maybe even wearing the Kohinoor. But we chose a very simple photo of how she was from day to day. The simplicity was what we wanted to (show), rather than passing a political message." 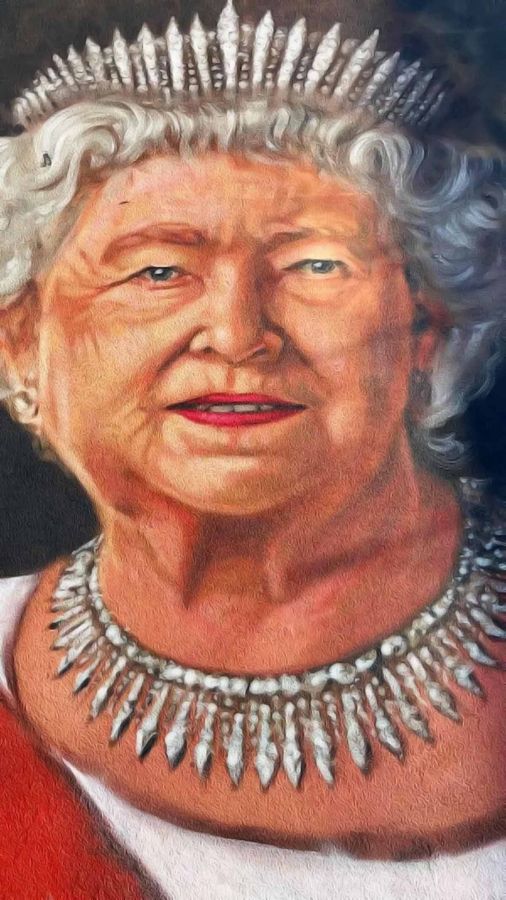 Yash and Jignesh started the mural on Sunday and painted through the night using halogen lights and then took a break and started again Monday afternoon and were done by Tuesday evening.

The mural began garnering unmanageable oodles of attention long before it was completed with many complaining there was no resemblance between the monarch and Jignesh and Yash's interpretation of her.

That changed to an extent when it was completed and praise was more forthcoming, especially since Yash and Jignesh have really put that wee corner of bustling Hounslow on the map. It's likely to be that way for many days to come.

Can the mural exist in perpetuity? "It's going to stay here for years and years to come."

One of the people most ecstatic with Yash's work was his dear mum. "She was very happy. She was just proud of me, which is always nice," he says with a laugh.

Will Yash and Jignesh's run as temp celebs end this week now that the queen has reached her final resting place in the vault at St George's chapel at Windsor?

Or might their artistic cachet increase should, by some miracle, one of the royals stop by to see the mural, or desire a meeting with the Gujarati-origin Holbein-esque painters of Hounslow? A King's Face Shrouded In Sadness 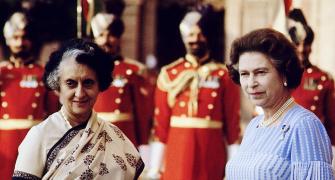 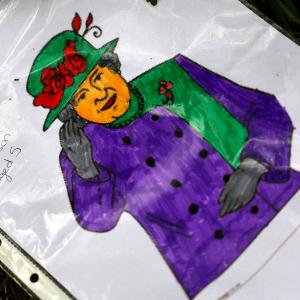 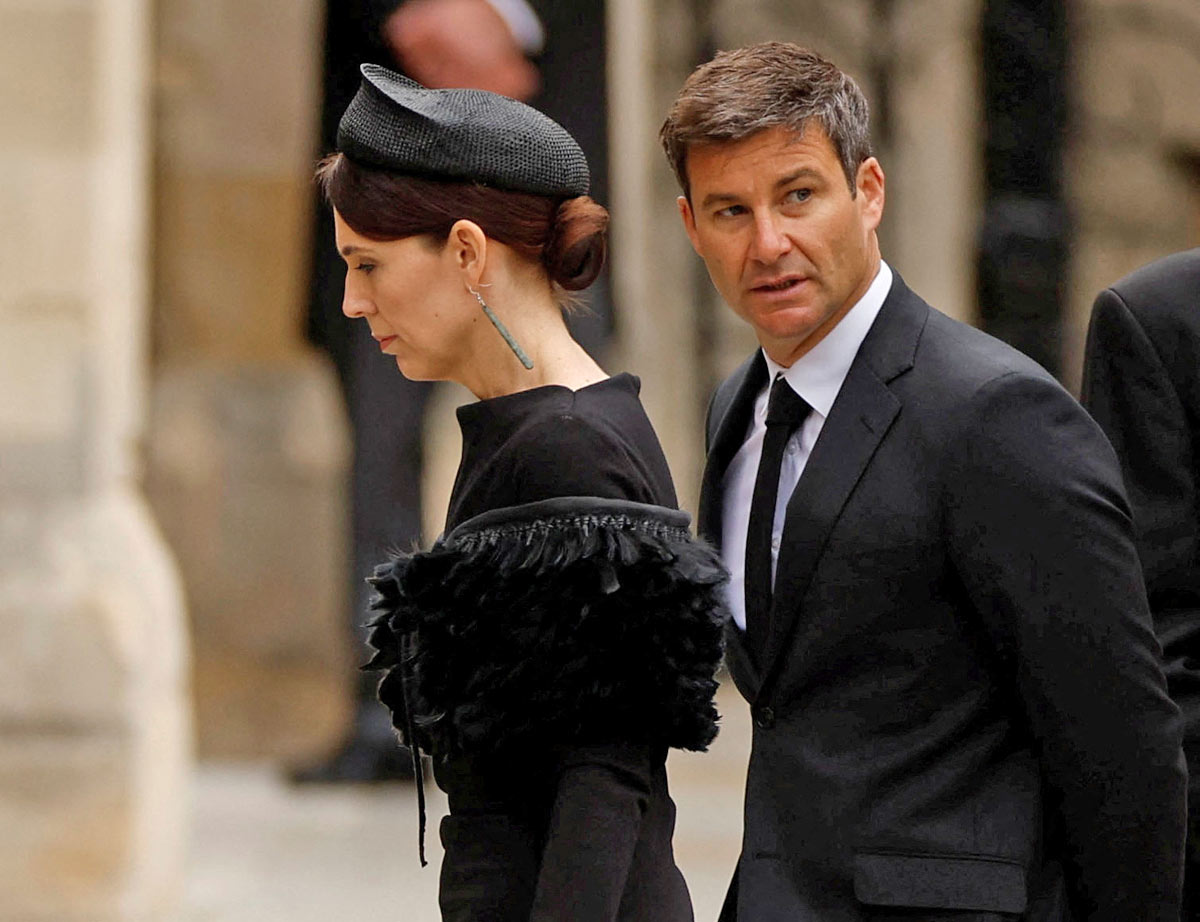