'The Supreme Court has laid out some very important principles.'
'Let us see if the government will try to circumvent it and subvert the very essence of these principles or if it will comply with the order in the right spirit.' 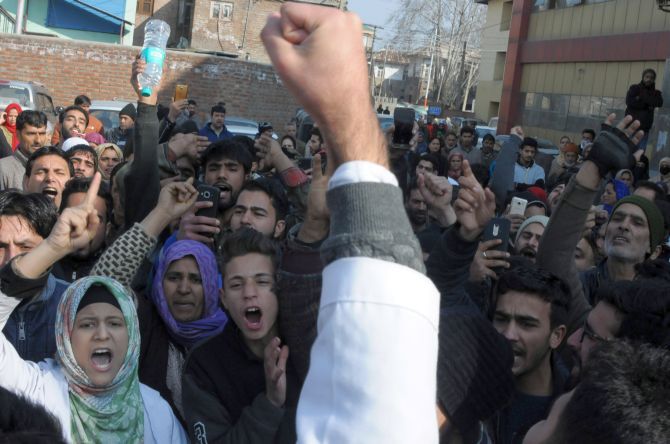 Anuradha Bhasin, executive editor, Kashmir Times, was one of the petitioners whose plea to relax curbs on the Internet, mobile and landline connectivity and freedom on the movement of journalists and media persons in Jammu and Kashmir was heard by the Supreme Court on Friday, January 10.

The fearless journalist tells Prasanna D Zore/Rediff.com what she thinks of the apex court order.

The Supreme Court verdict, looking at whatever is out in the public domain, has revived some hope of normalcy returning to Jammu and Kashmir.

There are three significant points in the judgment: One, it says access to the Internet is a Fundamental Right under Article 19 of the Constitution and that the State cannot curb this right indefinitely.

And that you cannot use this arbitrary power to curtail these rights and it must bring into the public domain the reasons. And they have to be valid reasons for shutting off the Internet or other communication channels.

In terms of principles, these basic points that the Supreme Court have made are very, very, significant and will have a bearing on the future.

However, right now, it has not given any immediate relief to the media or to us, because the government has been asked to review the order within a week. So it may take some more time to see whether this translates into relief for us.

On the challenges faced

It has been five months, so there has been a lot of delay in this verdict.

During these five months, the kind of challenges the media has faced in Jammu and Kashmir are immense and unimaginable.

The kind of curbs we have been facing are extremely disproportionate. Continuing to operate despite these challenges has virtually led to the throttling of the media in Jammu and Kashmir.

We have faced circulation issues, financial issues; we haven't been able to publish our Srinagar edition for a long time.

And because of the Internet shutdown and because there is only one little facility available, which is set up by the government for mediapersons to operate, where their entire work is under surveillance, it has led to fear and intimidation in the minds of mediapersons and completely disabled them from operating freely.

While some newspapers have been publishing since September and October (the curbs were imposed on August 5, 2019, when the Centre abrogated the special powers bestowed on the state of Jammu and Kashmir by Article 370), but the kind of content that is coming in the newspapers is not much.

The only facilitation centre was available in Srinagar while in the districts correspondents had no connectivity, not even in Jammu region.

The five districts (in the Kashmir valley) were impacted very badly, but even in Jammu region, and other districts the Internet was available only partially. It did impact our working in a huge, huge, way.

In some ways, we do feel that the delay in justice is denial of justice.

The media has suffered heavy losses and I don't know who is going to compensate us for this.

On the economic losses suffered by the media

Newspapers are not being published; even if they were published, the circulation mechanisms have not picked up; there were restrictions (over circulation), especially in the rural areas.

Circulation was hit, financial losses were incurred because government advertisements were stopped.

From the day I filed the petition in the Supreme Court, Kashmir Times was deprived of advertisements by the state government.

We are all staring at massive losses.

On the review by the government

The Supreme Court has asked the government to review its order of curbs on the media, curbing the use of Internet. Let us see what they do about it.

The Supreme Court has laid out some very important principles. Let us see if the government will try to circumvent it and subvert the very essence of these principles or if it will comply with the order in the right spirit.

Will there be a restoration of the Internet within a week or a little later? I don't know.

If you go Constitutionally, and if you go by the Supreme Court verdict, then they should (restore the Internet).

Right now, there will be no change in the ground situation.

We started publishing (Kashmir Times) from October 11, 2019. That is after some restrictions were removed. Landlines were restored almost after a month (since August 5). Mobile connectivity actually started on October 13, two days after we started (publishing Kashmir Times).

We have two editions and our headquarters is in Jammu. To transfer the pages, the opinion pages and comment pages is a task.

We are the only English paper publishing editorials regularly, commenting on what was happening.

We did trials for 10, 15 days before actually starting to print the paper. The Internet was erratic; the media facilitation centre at that point in time was shut down before 9 pm. So for the first two weeks, we were putting the paper together by 8.30 pm.

Connectivity was so erratic that one day they (our correspondents) could file stories and the next day we couldn't get any access. There were so many people waiting for the few computers available there (at the media facilitation centre in Srinagar).

And that was something to look forward to because if you don't have the Internet, you still have mobile connectivity. You can remain in touch and that helps a little.