General Bajwa gets inputs from his senior officers, but he has the final word, notes Rana Banerji, who headed the Pakistan desk at the Research and Analysis Wing, India's external intelligence agency. 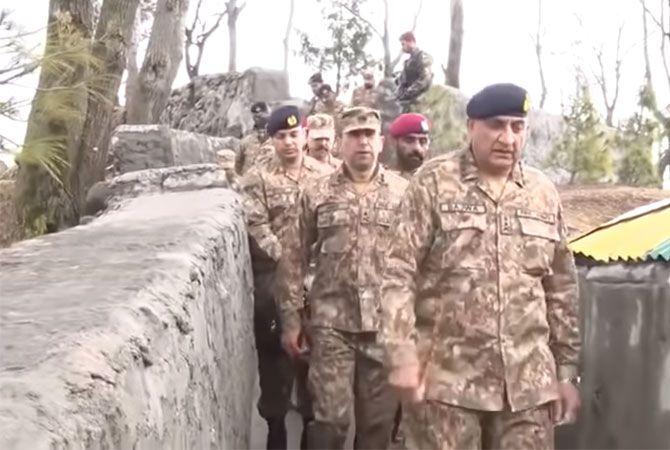 Two slots of corps commanders -- 31 Corps, Bahawalpur and 5 Corps, Karachi -- will fall vacant. This will be the second last reshuffle/promotion of three star generals that Pakistan army chief, General Qamar Javed Bajwa will oversee during his current term, which ends in November.

The next reshuffle, due in September, will open up only three more positions for lieutenant general rank.

As in most professional armies, the promotion pyramid gets very steep at senior ranks in the Pakistan army and supersession of a fair number of major generals is common.

Several qualified officers are available to choose from. The chief of army staff gets inputs from his senior officers during the army promotion board, but he has the final word while picking five officers from the 15 to 20 senior most major generals.

Command, staff and instructional appointments at major general rank are requisites for further promotion. Some posts are considered 'first tier' such as the director general military operations.

Command of some divisions such as 10, 11 (both in Lahore), 12 Infantry (Murree), Ist Armored Division (Multan) and Force Commander Northern Area (FCNA-Gilgit) are considered prestigious.

In the staff category, chiefs of staff of a strike corps (1 Corps, Mangla and 2 Corps, Multan), cice chiefs of general staff and in the instructional domain, commandants of the Pakistan military academy, Kakul, and the command and staff College, Quetta are first tier posts.

In view of this change, posts of inspector general of the Frontier Corps in Khyber Pakhtunkhwa and Baluchistan, as also the rangers in Punjab and Sindh are considered first tier posts.

Administrative posts such as director general of quartering and lands, budget, pay and pension, defense purchase etc are considered second tier posts. Usually, officers posted to these positions do not make it to the next rank.

General Bajwa has followed a policy of rotating three star generals from field to staff appointments equitably enough, but the balance between different arms is currently a little skewed, as seven serving lieutenant generals (out of 28) are from the armoured corps, while 3 are from engineers.

This suggests that no major general from these two arms may be promoted in this cycle. All five promotions this time could be from infantry or possibly one from the artillery.

Regimental bonds are stronger among infantry and armored corps officers compared to other services. Capable officers from the chief's service or parent battalion/regiment get choice postings that can give them an edge.

The list of eligible major generals includes many first-rate officers.

Sahir Shamshad Mirza is from the Sindh Regiment. After serving in the important position of DGMO, he is currently vice chief of general staff.

Kaleem Asif is from the Frontier Force regiment. He served as general officer commanding of the 12 division and was considered a favourite of former army chief, General Raheel Sharif. General Bajwa sent him out as chief of staff, southern command at Quetta (12 corps).

He is from General Bajwa's Baloch regiment, but his name became controversial when the army negotiated a settlement between the government and protesting leaders of the Tehrik-e Labaik ya Rasool who were blocking a major highway to Islamabad at the Faizabad crossing for several days.

Major General Hameed signed that document on behalf of the army. Then prime minister Nawaz Sharif had accused him for encouraging defections from the Pakistan Muslim League during the 2018 election.

Sardar Tariq Aman is from the Baloch regiment. He served as GOC 10 division in Lahore and IGFC Baluchistan.

Azhar Abbas is also from the Baloch regiment. He served as private secretary to the chief of army staff, commanded 12 division, Murree, and is currently commandant of the school of infantry, Quetta.

Nauman Mahmood, currently director general (analysis) at the ISI, hails from a military family. His father, Lieutenant Colonel Raja Sultan Mahmood, was killed in action in the 1971 War in East Pakistan (now Bangladesh).

Major General Nauman was commissioned in his father's parent 22 Baloch regiment. He commanded a brigade in the tribal areas (FATA), served as chief Iinstructor at the command and staff college, Quetta and GOC, 7 division in KPK.

Tahir Masood is from the Punjab regiment and is currently GOC of the special services group, Tarbela.

Upgrading of command of SSG is a relatively recent phenomenon. In the past, conventionally, SSG was seen as the Pakistan army's 'muscle punch'. SSG commanders were called 'fighter types' and usually did not get promoted to three star rank.

Major General Nadeem served as IGFC, Baluchistan. Major General Asif Ghafoor has been the public face of the army and can be considered a Bajwa favourite in days when personal veneration of chiefs has become fashionable. However, his elevation may be seen as bad optics by his peers.

How General Bajwa brings in a new team with requisite experience, due balance of infantry officers in senior ranks, including several from his alma mater, the Baluch regiment, will be watched with interest. 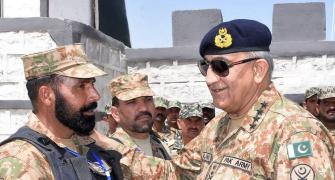