'The Pakistan army is trying to mainstream the LeT.' 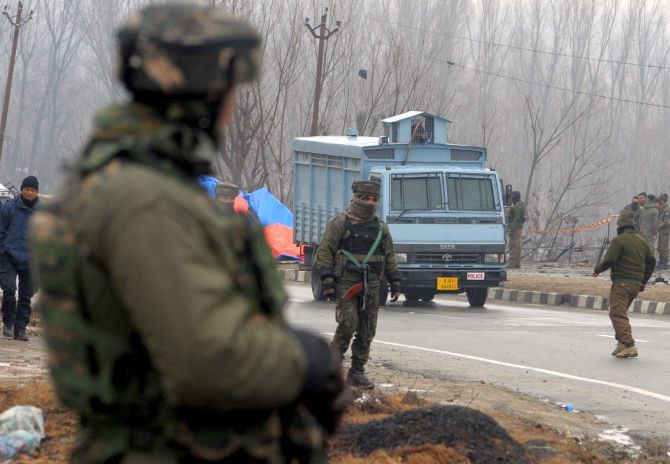 The car bomb attack on February 14 by a Jaish e Mohammed terrorist in which 41 Central Reserve Police Force personnel lost their lives in Pulwama is the worst attack on security forces in Kashmir.

Since it was a car bomb attack, drawing parallels to similar attacks in Iraq, Afghanistan and Syria is natural.

The attack brings into focus once again the increasing use of Jaish e Mohammed by the Pakistani establishment and its dependence on radicalised local youth to carry out acts of terror.

"I don't think the security situation has deteriorated in Kashmir. You only have to look at the effectiveness of the army action against terrorists over the last two years," Tilak Devasher, former special secretary, Cabinet Secretariat (aka the Research and Analysis Wing, India's external intelligence agency), and the author of two books on Pakistan, tells Rediff.com's Utkarsh Mishra.

India has withdrawn most favoured nation status to Pakistan. How does it affect the real establishment in Pakistan, the military?

Given the volume of bilateral trade between the two countries, the move is perhaps only symbolic.

But it is an important signal that indicates India's resolve to respond to terrorism from Pakistan in a holistic manner.

From the prime minister and home minister's statements it is clear that India is planning a counter attack. Do you see the possibility of a surgical strike-like action?
Is the government under pressure to behave more belligerently by the kind of narrative television news channels are creating?

The media is perhaps articulating the anguish of the people of India at being at the receiving end of Pak-sponsored terrorism.

Any democratic government has to factor in such sentiments in its policy options.

We will just have to wait and see what kind of action the government will take.

Despite NIA (National Investigation Agency) tightening its grip around Jaish and Lashkar e Tayiba over the past several months, how could such a big attack be executed, given the assault on terror funding?

It is perhaps too soon to pass judgement on this. The investigations into the entire tragedy have just begun.

Do you agree with the position that the situation on the ground in Kashmir has substantially deteriorated and radicalisation has increased manifold? Where does the government need to work to improve the internal situation in Kashmir?

I don't think the security situation has deteriorated. You only have to look at the effectiveness of the army action against terrorists over the last two years.

About radicalisation, the general impression is that this is increasing, but perhaps a more detailed study is required to identify the areas where this is happening and the reasons for the same.

A generalisation that radicalisation has increased manifold would convey the wrong impression.

Last week you remarked that 'radical, anti-India forces are entering the Pak electoral process'. Is the Pulwama attack a manifestation of this?

A distinction needs to be made between terrorism and radical forces entering the electoral process.

Since the Pak army is trying to mainstream the LeT, the JeM is being increasingly used for terrorist attacks in India.

Many experts say that this attack is very similar to suicide attacks in Kabul by the Taliban. Can the US withdrawal from Afghanistan affect India in such a way that the Taliban gets to play a role in Kashmir?

Media reports suggest that an Afghan veteran had trained the suicide bomber. So yes, the similarity with Kabul-type attacks is there.

US withdrawal from Afghanistan and the installation of its proxies in Kabul will have an impact in that it will allow Pakistan to focus much more on Kashmir.

As a truce with the Taliban seems unlikely, does the US need Pakistan on its side again in the subcontinent? What effect would it have on the US stand against Pakistan's support to terror?

The US is in a hurry to exit from Afghanistan. For this, it finds Pakistan useful.

As in the past, they will make noises about terrorism, but keep the focus on withdrawal.

Despite condemning the attack, China has made it clear that it won't change its position on Masood Azhar. Does that show China is not serious about post-Wuhan 'normalisation of ties'? What should be India's stand?

For China, its 'all-weather' friendship with Pakistan is of far greater importance.

While pushing China on the issue, we will have to depend on our own resources to deal with terrorism.

What options other than military can India exercise to avenge the attack?

There is a whole range of options that can be exercised that includes diplomatic, economic, social and so on.