News
Business
Movies
Sports
Cricket
Get Ahead
Money Tips
Shopping
Sign in  |  Create a Rediffmail account
Rediff.com  » News » What Chinese army is up to at the LAC

Indian Army officers are convinced China is maintaining the pretence of dialogue and negotiations in order to create the opportunity to occupy more Indian territory.
Senior Indian planners apprehend this might be a Chinese ploy to divert attention from Depsang, in Northern Ladakh, which might be China's actual target.
Ajai Shukla reports. 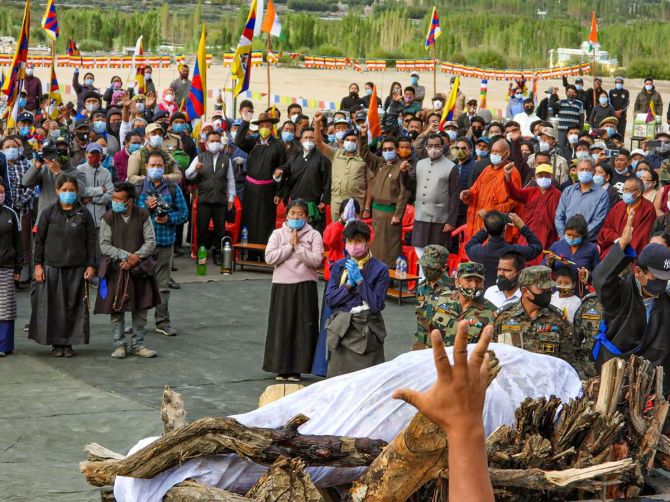 The failure of three months of military and diplomatic dialogue in persuading Beijing to withdraw its troops from Eastern Ladakh was underlined on August 30 when hundreds of soldiers of China's People's Liberation Army crossed into the Indian side of the Line of Actual Control south of Pangong Tso, occupied a mountain called Helmet Top and began building fortifications.

Credible government sources say when Indian soldiers from the nearby Thakung post intervened, physical clashes broke out, though there are no reports of firing or casualties on either side.

Sources say the PLA now occupies Helmet Top as well as a nearby feature called Black Top, both of which are on the Indian side of the LAC.

From here, Chinese soldiers can observe and track Indian movements across the Pangong lake and as far away as India's tactically vital Chushul garrison.

'On the night of 29/30 August, PLA troops violated the consensus arrived at during military and diplomatic engagements and carried out provocative military movements to change the status quo,' the Indian Army stated.

Indian officials, however, are keeping silent about a counter operation, launched on August 30 night by soldiers of a secretive Indian commando force called the Special Frontier Force.

Consisting of soldiers recruited from the Tibetan refugee community in India and formed into what are termed 'Vikas battalion', an SFF detachment is reported to have occupied key heights that China claims as their own.

There are differing accounts of what transpired, but, according to one source, the SFF detachment clashed with Chinese troops and inflicted significant casualties on them.

One Tibetan SFF officer was killed and at least two injured in the operation.

The PLA Western Theatre Command, which is responsible for the entire India-China border, accused India of 'illegally crossing the line' on August 31 at two points -- the south bank of Pangong lake and near Rezang La.

The PLA statement said India had 'blatantly provoked and caused tension on the border' and had 'undermined the consensus reached' at the diplomatic and military talks.

The Pangong sector has been bitterly contested since the PLA trespassed across the LAC in mid-May. The bulk of the Chinese force occupied the Pangong lake's northern bank, up to a point called Finger 4.

Several hundred more climbed the hills that overlook Pangong lake from the north and entrenched themselves on a dominating height called Green Top, where they still remain.

Another 2,000 crossed the LAC into the Pangong lake's south bank and began patrolling up to a mountain called Black Top, which adjoins Helmet Top and India’s important Thakung post.

Both Black Top and Helmet Top are on India's side of the LAC. The PLA's occupation of these features has effectively shifted the LAC westwards, to China's advantage.

Sources on the ground say the PLA brought along enough building materials to Helmet Top to construct fortifications for three-four infantry companies (300 to 400 soldiers).

On the north bank of the Pangong lake, the PLA has shifted the LAC to its advantage by about 8 km, from Finger 8 to Finger 4.

On the south bank, however, the strongly held Thakung post -- which has a mixed garrison of army soldiers and Indo-Tibetan Border Police troopers -- continues to dominate the Pangong lake's southern bank and observe Chinese activity on the lake and even on the north bank.

India has reinforced Eastern Ladakh strongly and there is anger amongst soldiers and young officers at what they perceive as Chinese perfidy.

Many are convinced China is maintaining the pretence of dialogue and negotiations in order to create the opportunity to occupy more Indian territory.

Senior Indian planners apprehend this might be a Chinese ploy to divert attention from Depsang, in Northern Ladakh, which might be China's actual target.

Depsang offers the shortest and easiest route for Indian armoured columns to reach the strategic Tibet-Xinjiang road (Highway G219), the security of which is Beijing's core sensitivity in this area.

PLA intrusions 15 km into the Depsang sector have currently blocked Indian patrols' routes to the LAC.

The Chinese are also clinging to advantageous positions they occupied in the Hot Spring -- Gogra area -- despite an agreed withdrawal plan.