Wanted to be a doctor, became Carnatic star 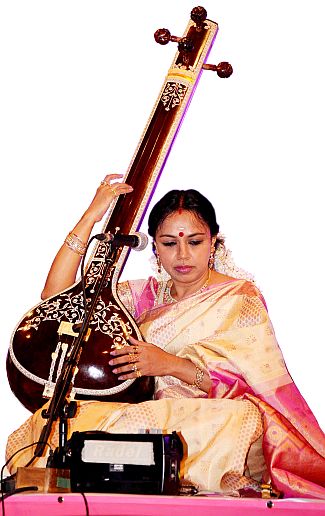 Shobha Warrier interacts with Carnatic star Padma Shri Sudha Raghunathan, one of the busiest and the most accomplished singers.

It's that time of the year again when the cool air in Chennai breathes music, along with the fragrance of jasmine flowers and filter coffee. The month of Margazhi, which is packed with dance and music concerts, is here and art lovers from across the world have started flocking to the city to listen to watch some of the finest Carnatic musicians and dancers.

Among the busiest and the most accomplished singers of the season is Sudha Raghunathan. There was a time when she would perform on almost every day of the Margazhi Festival of Dance and Music, also known as the Chennai Dance and Music Festival.

"My first memories are like an adventure," Raghunathan said. "I was like Alice in Wonderland. I was in my early 20s and running from one venue to another singing 20 concerts a month. I even sang when I was just 20 days from delivering my daughter. People were nervous to see me with such a huge stomach."

A child prodigy, Raghunathan's tryst with music started when she was a toddler; her mother, a music teacher, introduced her to it.

"I used to sit with toys in one corner, and listen to my mother teach her students and hum with them," she said.

"My amma (mother) and appa (father) were devotees of Sai Baba every time we visited the ashram I would go prepared with a new bhajan (devotional song). I must have been two or three then. I would recite the entire (Venkatesa) Suprabhatam at three."

But being a musician was never her dream; music was a hobby. "Singing was more for showing off. If anybody asked me to sing, I used to sing immediately. I enjoyed all the praise," she added.

Raghunathan wanted to be a doctor. The turning point came when she won a government scholarship for music that entitled her to lessons for three years from the legendary vocalist M L Vasanthakumari.

"Learning from her was a different experience; there was no teacher teaching a student kind of routine," she said. "It was all listening to her sing and internalising. It was very challenging and I don't know from where I got the talent to assimilate all that, but I did. Her style was very difficult and she sang fast. Her sangatis (variations in a song) were like lightning. For the voice to produce such sangatis suddenly is very difficult, but she inspired me and gave me the courage to do it."

Raghunathan's introduction to concerts began with accompanying MLV on the tanpura.

"The first time I was asked to play the tanpura for MLV, I felt proud and excited," she said.

"There was a bit of nervousness too, as you are sitting next to a legend! I was awestruck. But when I was asked to sing with her, I was nervous. One had to move from one sangati to the other very fast. Suddenly, she would sing something new and you had to pretend you knew it. I used to follow her like a shadow."

When the three years of the scholarship were drawing to a close, MLV asked her to carry on as her vocal support instead of returning to academics. She agreed.

As MLV's disciple, it was not difficult for Raghunathan to break into the Carnatic music circuit. "People do give you the first break because you are MLV's disciple, but after that, it is up to you. Every concert takes you to the next one. You can never take any concert easy," she said.

"There was a vacuum after her (MLV's) death and I was pushed into it as her disciple. It was followed by a lot of media attention, international tours, invitations to international festivals and collaborations with foreign artistes. All started happening one by one due to my guru's blessings. Landmark events kept happening. Then came the Padma Shri (one of India's highest civilian awards) and Kalaimamani (Tamil Nadu state award)."

"It is always easy climbing the ladder but once you reach the top, it is tough to maintain the position," she added.

"Rasikas expect 100 percent from you in every concert, something new and something path breaking It is tough to live up to the expectations. With every award, your responsibility goes up."

To break into the top rung was comparatively easier during her time, Raghunathan said, adding, "It is different today, as there are so many youngsters and all of them are very good. It is very good for music, but tough for young musicians. It can be frustrating and disturbing for these talented youngsters. You may do well yet not get an opportunity again."

Having performed outside India several times, she believes, "In Tamil Nadu, they know music. They predict every move and it is much more difficult to please the audience here. Outside Tamil Nadu, if you are delivering everything correctly, you will be able to reach them and touch them. If it's a white audience, you will have to handle it differently with a bit of explanation and interpretation of the songs. Otherwise, love for music is the same all around the world."

Among the performances she cannot forget are one at Broadway in New York for the Bharatiya Vidya Bhavan and another at Chennai's Music Academy Hall.

The former, she said, "was very prestigious. I still remember the huge posters of mine there; we took pictures in front of the posters. It was a two-segment concert and Yesudasji sang for the first two hours and I sang the next two. It was a huge hall with the best of seating and acoustics. It was a wonderful experience."

The latter, she added, was during the "Margazhi festival in the early 1980s It was wonderful. The hall was packed in the afternoon."

And with another Margazhi upon us, Raghunathan is gearing up for another tough season; she has decided to limit herself to "just 15 concerts" this season.

"Margazhi is special, the most special time in a Carnatic musician's career, and the most exciting time too."