United Against Hate started as an on-and-off campaign against lynching; today, with the passing of the Citizen (Amendment) Act, its members are on the streets, protesting, reports A Ganesh Nadar/Rediff.com. 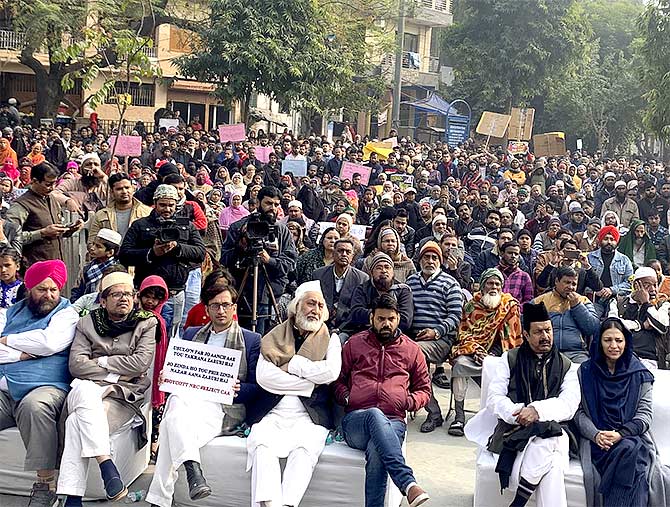 It began as a campaign against lynchings.

Today, this determined group challenges hate politics wherever it rears its ugly head.

Today, they stand United Against Hate.

It began when self-confessed cow-protectors would beat up, and sometimes lynch, people who belonged to a particular minority community.

A group of people approached certain secular parties and asked them to proactively fight this crime. But the response was lukewarm. So this group decided to campaign against it themselves.

United Against Hate started as an on-and-off campaign against lynching; today, with the passing of the Citizen (Amendment) Act, its members are on the street, protesting.

Khalid Saifi, 38, a religious tourism travel agent and an active member of the group, tells A Ganesh Nadar/Rediff.com how United Against Hate stands up to hate. 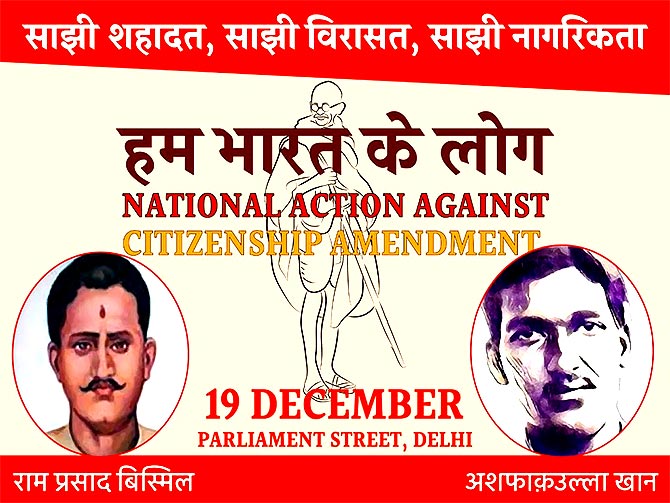 There was a spurt of lynchings across the Hindi belt and the Opposition political parties were not ready to do anything about it. We decided we had to help these poor people who have nobody to turn to.

Now, there is a core group of 17 members in Delhi. We meet often and discuss what we need to do and how we should go about it.

We then inform our 25 extended groups, which are spread across Uttar Pradesh, Bihar, Maharashtra and Kerala. In Delhi alone, we have eight groups working with us.

The average age of our members is 35 years and all are working people. There are a few students as well.

Our members belong to different religions and castes and speak languages. What holds us together is the fact that we are all United Against Hate. 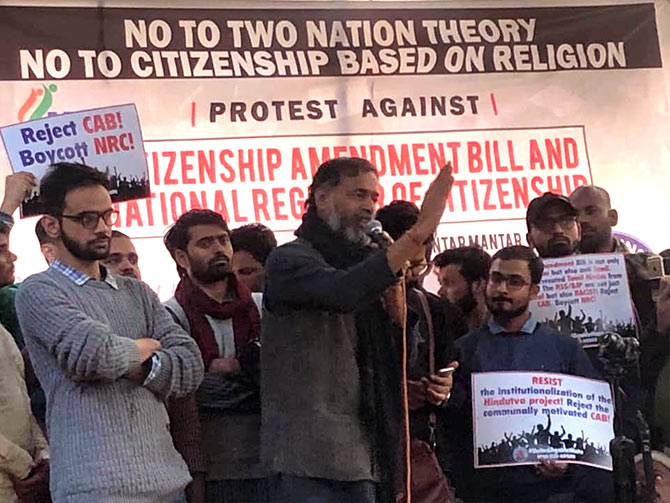 We have a three-stage response to any lynching.

First, we organise a protest in front of the bhavan of the state (where the lynching happened) in Delhi. All states have their bhavans here.

Second, we send a fact-finding team -- we have teams in 100 districts -- to the place where the lynching happened. We also help the victim's family.

We then call a press conference in Delhi to share what we have learnt with the media. We also spread the news on social media. We have a Facebook page and a Twitter handle with 25,000 followers.

In July 2019, we launched our national helpline to help victims of hate politics. The number is 1800-3133-60000. It has four lines that are manned by our members. They take calls, advise the callers and decide how to help them.

In the beginning, we would get hundreds of calls every day from people who wanted to check if the numbers work. Some would abuse us.

Now, we get 8 to 10 calls a day. We forward the details to our nearest team so that they can follow up and see what needs to be done.

We provide free legal help to the victim. All our lawyers work pro bono. We are ready to fight their cases right up to the Supreme Court.

Even when the victims employ their own lawyers, we keep an eye on the case.

Since the passing of the Citizen (Amendment) Act, we have been organising peaceful protests. We have also filed a case against it in the Supreme Court.

This is our second case in the highest court of the land.

We filed our first case when a law was passed that allowed even a single person to be named as a terrorist organization.

They have made a law where searching on the Internet becomes an offence.

Among our members we have six PhD scholars.

Umar Khalid and Anirbhan Bhattacharya from Delhi's Jawaharlal Nehru University are our members. Umar is one of our founding members.

Since the outbreak of the CAA protests, we have been running between protest venues and police stations. Our lawyers are either at the station or in court. We have been working late nights, sometimes till 4 am.

Thirty per cent of our members are women; they are the hope for our future and the future of Indian society. 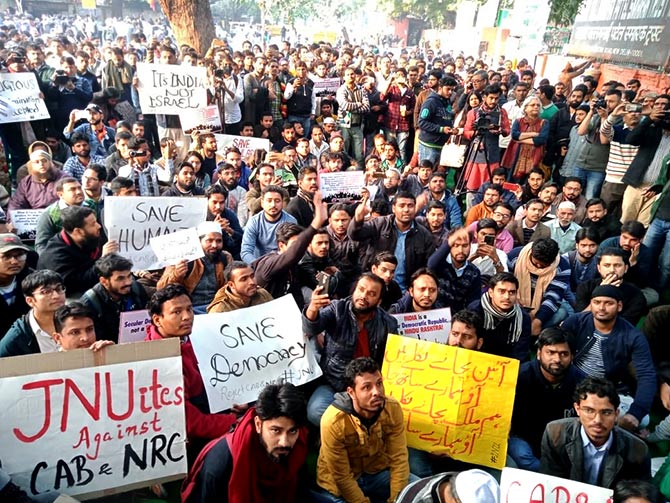 IMAGE: United Against Hate protests the violence against JNU students.

As far as the National Register for Citizens is concerned, we spent a week last year and another week this year in Assam.

They are saying Muslims have come in from Bangladesh into Assam. Maybe three per cent of the Muslims identified but not in the register will be from Bangladesh; the others have been in India for generations.

They did not leave during Partition; why should they leave now. And why would Muslims from Bangladesh come here? Bangladesh is progressing at a faster rate than India. As an under-developed nation, it gets concessions in trade and it has used this to its advantage.

Moreover, Bangladesh and India are friends, so why would they come here illegally? They can come here legally at all times.

We are here to fight hate politics legally and peacefully. Our numbers are increasing every day and we are here to stay.

A Ganesh Nadar has covered national issues for Rediff.com for 24 years. He can be contacted at ganeshn@rediff.co.in 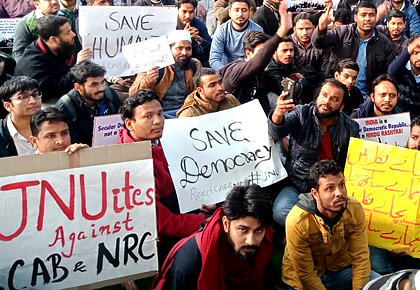