Commander Abhilash Tomy of the Indian Navy sailed the oceans and conquered likely death after a storm badly injured his spine and destroyed his boat.
Archana Masih/Rediff.com met the decorated sailor who fought all odds to return home alive. 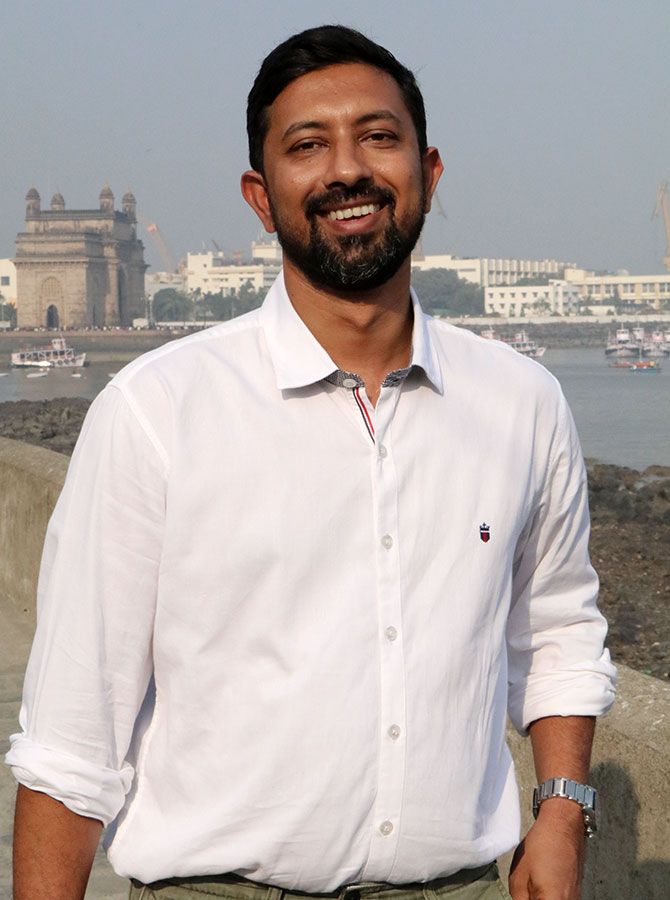 Commander Abhilash Tomy is a naval pilot and one of India's most accomplished sailors. He has sailed over 52,000 miles for the Indian Navy, including a solo non-stop circumnavigation. Photograph: Rajesh Karkera/Rediff.com

Two months after surgeons inserted titanium rods to hold his fractured spine, Commander Abhilash Tomy of the Indian Navy drives a car to the restaurant we are meeting at in Mumbai.

"In two months's time, I will be back to normal. I still can't run though," says the Kirti Chakra awardee as he asks for a cup of coffee.

"I don't meet many people because to get well I need to focus on myself."

The officer is back to naval duties after his rescue from one of the remotest parts of the Indian Ocean where he lay alone with a badly injured back in a boat severely damaged by a violent storm.

During those three days at sea, he lay supine with no feeling in his knees. All he could do is wriggle his toes -- and was hiccupping constantly for 7 days.

When the small rescue boat with crew reached Commander Tomy, he lowered himself on the stretcher and asked them to pack some clothes, his passport, wallet and electronics.

The film roll of the analog camera that he brought along hasn't been developed yet.

His boat, the Thuriya, he feels, could be adrift or may have sunk by now. 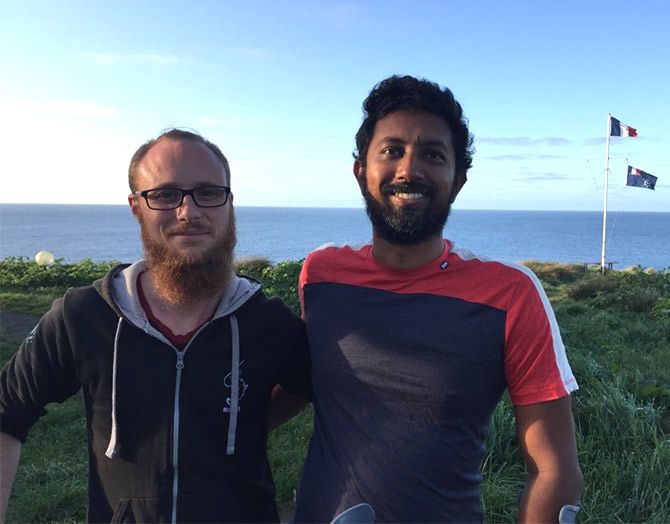 IMAGE: With Dr Lemarchand Rémy, the French doctor who looked after him at I'lle Amsterdam. Photographs: Kind courtesy Indian Navy/Twitter.

The rescue boat took him to the larger ship Osiris where he was given morphine and water.

The crew also got his clothes washed.

The next day he was taken to the tiny island of I'lle Amsterdam in the Southern Indian Ocean. A crane lifted him out of the ship.

When the lone doctor on the island took his first X-ray, Commander Tomy had to be held up in a bed sheet because he was unable to stand up on his own to get into different positions for the X-ray.

The X-ray did not show any fracture. The picture was sent to a specialist at Reunion Island who also did not detect a broken spine but could not rule out a fracture.

"Had I suffered one more fall, there was a good chance of lower body paralysis," says Commander Tomy.

Fellow competitor Gregor McGuckin from Ireland, who had turned around his broken boat to rescue Commander Tomy, was also brought to the island on the Osiris.

Both sailors had been dismasted by the storm that had sent walls of water 40 feet high at them.

McGuckin's engine had stopped functioning. He set up tiny sails and made a heroic attempt, limping to Commander Tomy's rescue.

"He made it to 30 miles near me, if the Osiris wasn't there, he would have been the first to reach."

"We were really up against the ocean, not against each other."

Commander Tomy and McGuckin spent time on the island where the Irishman would take long walks.

"I would call him the most handsome shipwrecked sailor in the Indian Ocean," laughs Commander Tomy.

"He planted a Phylica tree on the island in honour of the first shipwrecked Irish and Indian sailor!"

A day before the storm, Commander Tomy had overtaken McGuckin and was in third place in the Golden Globe Race.

The race had 11 participants, using 1968 vintage boats and 1968 era technology to circumnavigate the world solo and non-stop.

The race is still going on with five sailors left in the fray. 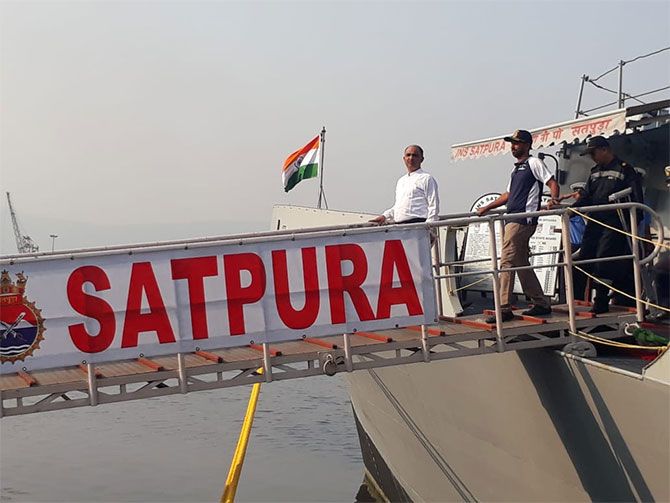 Four days later, he was picked up by the Indian Naval Ship Satpura. The commander of the Satpura, Captain Alok Anand, set aside news of his father's death and chose to come to rescue a fellow sailor instead of attending the funeral.

On board the ship, Commander Tomy received medical help and the doctor ensured there was no further injury. He started walking, climbed stairs, sunned on the deck.

The INS Satpura finally reached the Indian coast at Vishakhapatnam, a fortnight later. His father Lieutenant Commander V C Tomy (retd) received him along with the senior-most naval officer in the area.

The next day, he underwent surgery at the Army Hospital in Delhi. His mother and wife Urmimala were by his side.

Admiral Sunil Lanba, the chief of the naval staff, met him; he also received a call from the prime minister.

"My family was worried about the rescue, they knew I would bounce back once I was back."

"I tell my wife I am lucky to not have suffered a similar accident on the road because then the chances of survival are very slim," says Commander Tomy.

It was a very trying time for Urmimala, an illustrator of children's books. For his recuperation, she prepared the home with her husband's favourite books and music.

"She really made the home comfortable for me," says Commander Tomy. 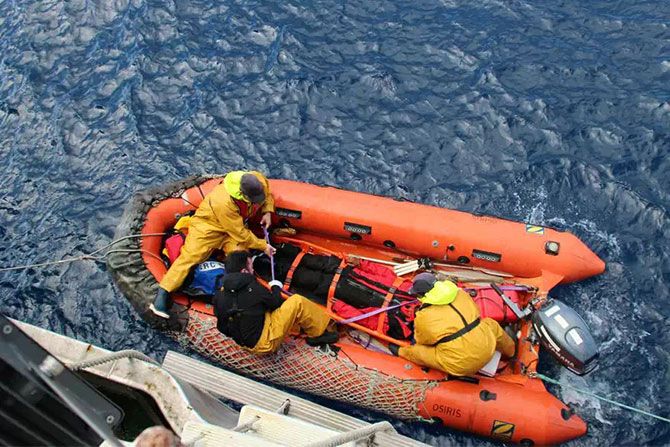 Never even once did Commander Abhilash Tomy feel that he would not be rescued.

"I knew I must keep myself alive till whenever help comes. After that, it was the rescuers's problem to keep me alive. My job was over," he laughs.

While on the boat, he was already planning his next expedition and trying to figure out how he could do better next time.

His wife had mentioned a statue of an albatross at Cape Horn. He would have liked to take a picture for her, but was not able to do it this time.

"Maybe next time. It's an indication that I have to do another race."

For a seasoned sailor who has circumnavigated the globe solo, he is totally free when alone at sea -- in the vast expanse of blue and grey.

"My responsibility is only towards my life, no interactions with anybody, no second guessing what others are thinking, no forming opinions."

"I would preferably rather be on sea than on land," he laughs. 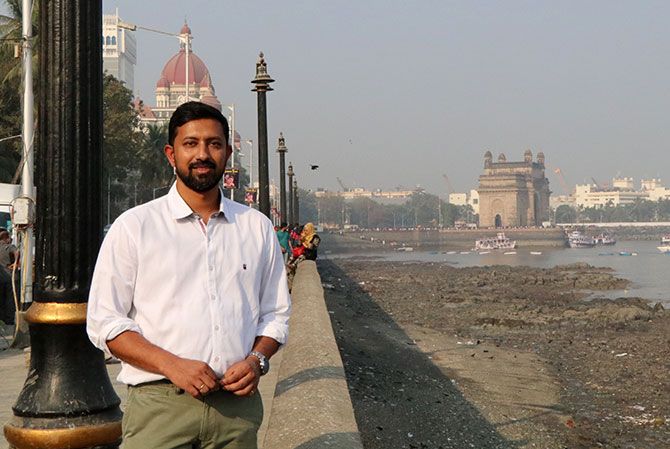 IMAGE: Commander Tomy at the Gateway of India promenade in Mumbai. After two months's leave, he is back at work with the Indian Navy. Photograph: Rajesh Karkera/Rediff.com

On a pleasant Sunday evening when people throng the city's favourite spot by the Arabian Sea -- the Gateway of India -- Commander Tomy walks to the promenade by the water's edge.

A cluster of sail boats bob up and down the muddy water. He sailed here last year and talks about his own sailing heroes -- sailors from the Age of Exploration, one in particular, Admiral Robert FitzRoy.

The admiral surveyed the South American coast on the HMS Beagle during Charles Darwin's famous voyage.

He meets a lot of young people and is disappointed that they really have no idea of the sea.

"It is disheartening that they know how much Kohli scored in 10 games, but cannot name India's island territories."

Young people need to keep going out and challenging themselves, he says.

"It is not nature alone, but the elements are the medium that help you understand and conquer yourself," he says, looking at the sea.

"You don't conquer anything by sitting in your room." 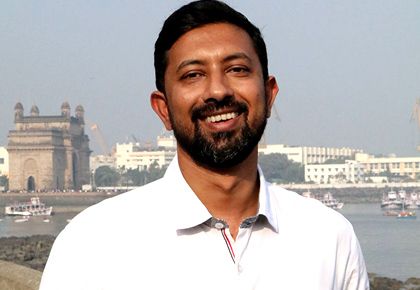 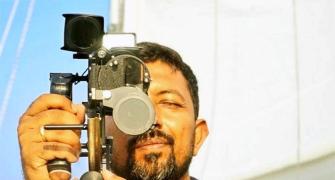 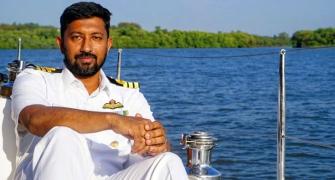 Abhilash Tomy eager to go back to sea 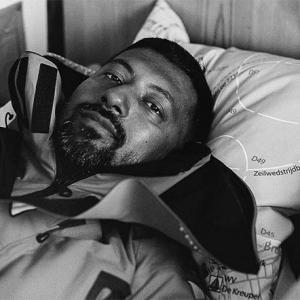 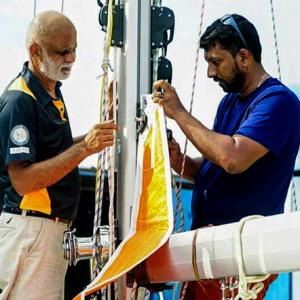