Flight Lieutenant Adivitiya Bal was killed in the line of duty along with Wing Commander Mohit Rana in last week's MiG-21 crash in Barmer.
His school in Nagrota, Jammu, gave a final salute to a worthy ex-student. A pall of gloom descended upon the Sainik School Nagrota in Jammu last week on hearing the news of the Indian Air Force MiG crash in Barmer, Rajasthan, July 28.

Flight Lieutenant Bal, an alumnus of the school, was 26. He had celebrated his birthday 12 days ago.

The young officer had joined the Sainik School Nagrota in 2007, completed Class 12 in 2014 and competed for the National Defence Academy that same year.

The school cadets, teachers and staff condoled the officer's passing at a special assembly by observing a two-minute silence and paying floral tributes.

The principal Captain A K Desai of the Indian Navy and staff attended the officer's funeral.

Two pictures -- one of Flight Lieutenant Advitiya Bal in school uniform and the other in IAF uniform -- are juxtaposed side by side in honour of the ex-student on the school Web site.

"He was a very calm student. Good in academics, sports and debates. He wanted to join the IAF and he did," says his teacher Mr R S Dayal.

"He joined as a 10 year old and got selected to NDA from here. It is very sad for us," says the Arts teacher.

"He was a good student. Among our best. His passion was the Indian Air Force," remembers Mr N K Sharma, Mathematics teacher who retired recently.

"Most of our boys come from modest backgrounds. Their aim is to join the armed forces and it was his passion to be a fighter pilot. I keep thinking of his smiling face," says Mr Sharma. 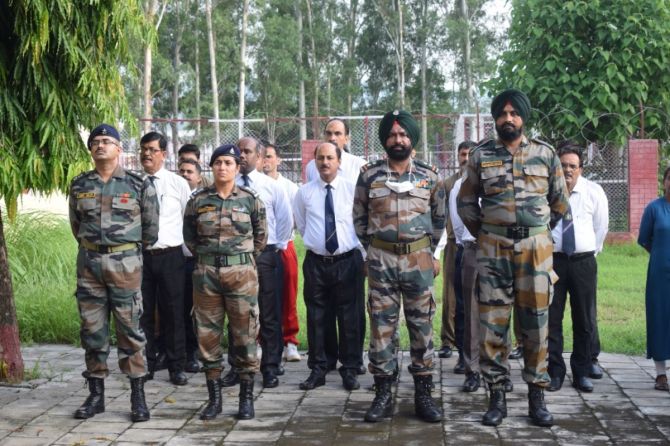 Flight Lieutenant Advitiya Bal hailed from the Jinder Mehlu village of Jammu district. His father was a subedar clerk in the Indian Army.

Sainik School Nagrota has lost three ex-students in the service of the nation.

Major Arvind Bazala, an army aviator, was killed in the line of duty in a helicopter crash near Siliguri, West Bengal, in 2016. He spent six years and represented his school at the Republic Day parade in 2001 as a student.

His wife Captain Ahaana Bazala joined the Indian Army after his passing.

Major Rohit Kumar of the school batch of 1996 died due to injuries suffered in a helicopter crash in Patni Top near Jammu in 2021. 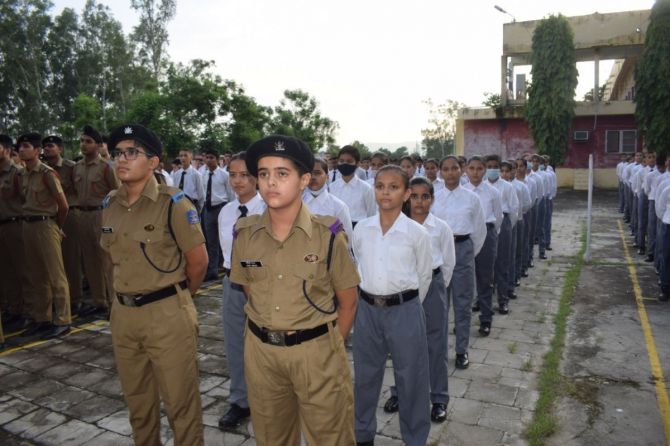 The Sainik School Nagrota was established in 1970 and has sent more than 800 ex-students into the Indian Armed Forces.

Flight Lieutenant Bal was posted with a fighter squadron in the Barmer district of Rajasthan. The two pilots were on a night training sortie when the engine of the MiG-21 burst into flames.

The pilots used their skills to manouver the aircraft away from habitation thereby saving lives and property on the ground. Tragically, they did not have enough time to eject and could not survive the crash.

A day after the crash, it was reported that the IAF will retire its MiG-21 fleet by 2025.

Called the 'Flying coffin', the jet has suffered several fatal crashes in recent years. In the last two years, six MiG-21 aircraft have crashed and five pilots killed in the line of duty.

"The government says cars that are 15 years old should be off the road, but is continuing with the MiG-21 which has caused so many crashes," says Mr Sharma in anguish.

The Russian made fighter been around for nearly 60 years. According to data from the ministry of defence reported in the Business Standard newspaper, 400 MiG-21 aircraft have crashed causing the death of 170 pilots. 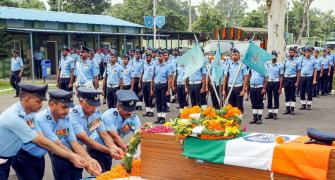 Another Young Pilot Is Laid To Rest 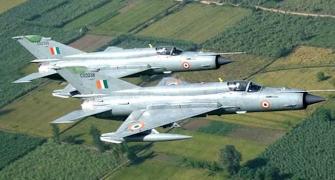