News
Business
Movies
Sports
Cricket
Get Ahead
Money Tips
Shopping
Sign in  |  Create a Rediffmail account
Rediff.com  » News » 'For him the nation came first; himself last'

Squadron Leader Samir Abrol's brother Sushant, who brought back his older sibling's coffin draped in the Tricolour, tells Archana Masih/Rediff.com why life will never be the same again. 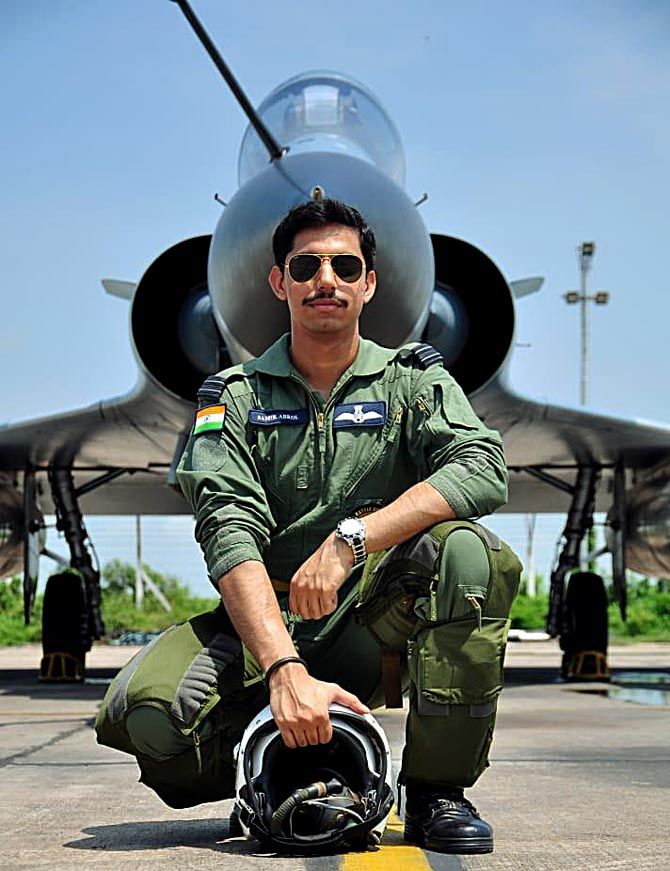 The rituals after the passing away of Squadron Leader Samir Abrol, 32, in a Mirage 2000 crash in Bangalore on February 1 are not over yet in the officer's home in Ghaziabad.

Visitors have been dropping in to condole with the family and strangers from all over the world are messaging.

'Thankful for his sacrifice for the nation. Jai Hind.' The message was sent by an Indian in London.

"It swells my heart with pride but when you lose your brother you've lost everything in life," says his distraught younger brother Sushant Abrol, 29, who brought his brother home in a coffin draped in the Tricolour.

Eight brother officers of Squadron Leader Abrol gave shoulder to the martyr's coffin and accompanied him on his final journey home.

"It was a regular day in our lives and then everything turned upside down," says Sushant who used to FaceTime his brother every day.

"My brother's credentials were top notch. He had directing staff grading in the test pilot's course which is a grade that the best of the best air force pilots get. His flying career was incident free. His record was spotless."

"It is a complete shock when you know your brother, child, husband is best in what he does and then this thing happens." 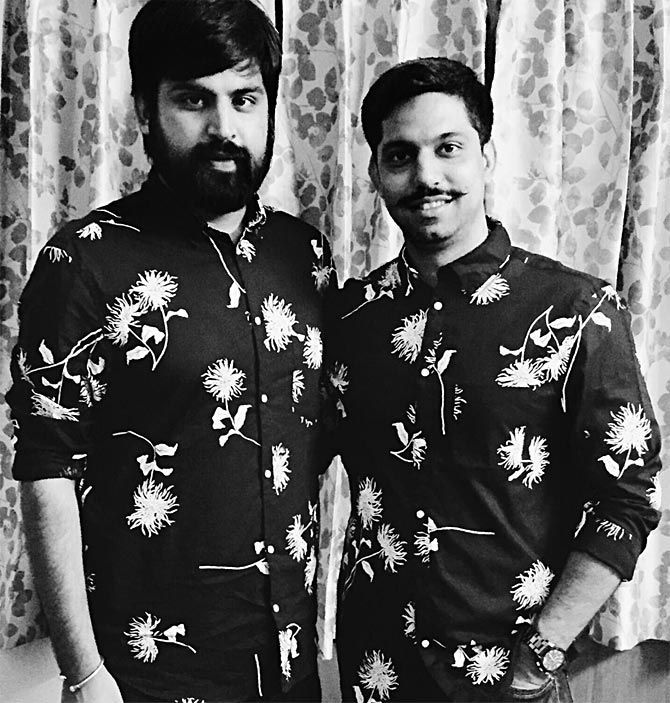 IMAGE: 'He had directing staff grading in the test pilot's course which is a grade that the best of the best air force pilots get,' says Sushant, a fashion designer.

The brothers had had a four hour conversation on Republic Day, five days before the crash.

Squadron Leaders Abrol and Siddharth Negi, both from the Aircraft and Systems Testing Establishment, were conducting an acceptance sortie of aircraft which had been newly upgraded by the State-run aerospace company Hindustan Aeronautics Limited.

It was Squadron Leader Negi's birthday that day.

A fashion designer, who recently left a job at Rohit Bal's design studio to begin a start-up, Sushant always valued his brother's perspective. The brothers discussed the new venture threadbare.

"He saw things from a place no one else could," says Sushant who suddenly has been thrust into shouldering the family's grief at this difficult time.

"He thought of the nation first; then the family; and himself last. That was how he prioritised life."

"But it is difficult to make a parent understand that." 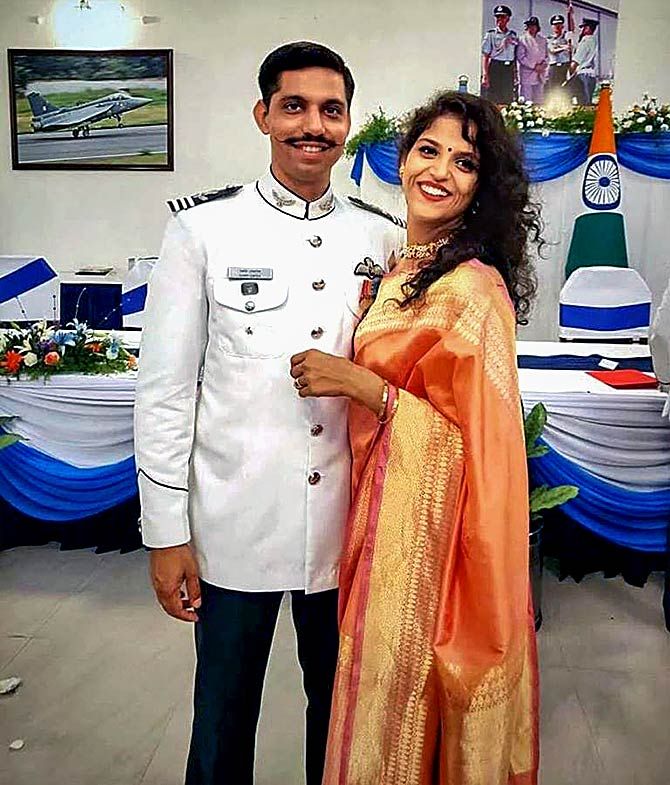 Squadron Leader Abrol's wife Garima, a Zumba instructor, is in the family home. She had written a heart-wrenching Facebook post on the loss of her husband she had married two years ago.

'Words can't describe how painful it is out here alone without my better half, my BATMAN.'

'I need answers...', she wrote, 10 days after she said bye after sharing a morning cup of tea with him.

It had been a regular day and then an officer came to take her to the hospital to see her deceased husband.

She doesn't know how she will pick up the pieces and move on. It is too early to even think about what the next moment would be, forget a future ahead.

The family is waiting for the findings of the court of inquiry. 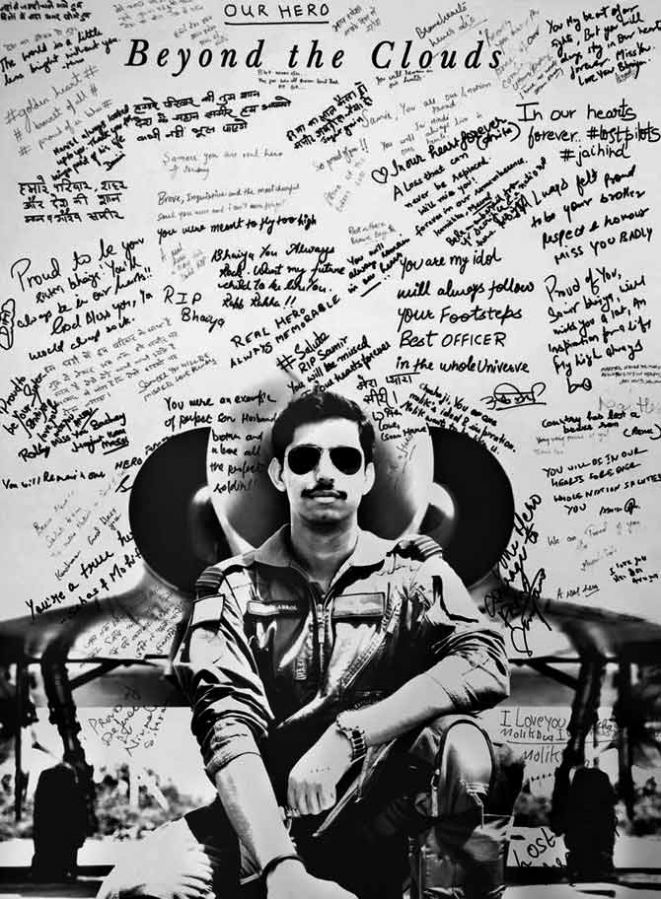 As we speak over the phone, another IAF fighter jet crashed in Pokharan, Rajasthan, and accentuates Sushant's dismay.

"The pilot was lucky. He could eject in an open ground outside the city. In my brother's case, the HAL runway is in between the city. The ASTE conducts its flying tests from right there," says Sushant.

"He may not have had a choice but to crash the plane in the periphery of the runway, otherwise many lives could have been lost if the plane had gone in any other direction."

People are calling him from offices around HAL, he says, telling him, 'Thank you, your brother saved our lives.'

Earlier airfields used to be located in wilderness, but now there is lot of built area near many IAF bases.

42 defence personnel have lost their lives in 23 air crashes since 2015, raising questions about the quality of equipment and technology.

"You are training them well, but you also have to give them the best equipment. They are expensive purchases but essential purchases," says Sushant.

"Won't this break the hearts of so many who want to join the IAF, who want to become fighter pilots?"

"Pilots are ready to die in a war, but who would want to die like this?" he asks in anguish. IMAGE: The brothers with their father in what would be their last picture together.

On Monday, Air Marshal Anil Khosla -- the vice chief of the air staff -- told reporters that the loss of the two pilots really hurts and the life of a pilot is the most important, and other factors come lower in priority list.

Air Marshal Khosla said the rate of such incidents after 2011-2012 were lower than before it.

'We had instituted related measures after 2011-2012, related to training, procedures, reorganisation, and thereafter the rate lowered,' he said and asserted that the process of investigation into any accident is a 'very scientific and advanced one'.

The black box of the Mirage 2000 flown by Squadron Leaders Abrol and Negi has been sent to France's Dassault Aviation for decoding data.

Sushant says it will be premature to say anything about the causes of the crash before the findings of the court of inquiry but is disappointed with the lack of prioritisation and accountability of the system.

"My brother always wanted to fly for the country. Money was never his agenda. People don't join the forces for money ever. They would get more money outside, but they choose to serve the country," says Sushant, explaining that for his brother the armed forces was the only choice.

In his profound time of grief what he also misses is the fitness app that he and his fighter pilot bhai shared.

Squadron Leader Abrol always pushed his younger brother to lose weight and get fit. He checked on him every day to find out the number of steps he clocked and whether he went to the gym.

Very conscious of fitness, the pilot was a regular gym goer.

"I am checking that app and it says 0 calories burned by Samir -- and it will never move again," says Sushant.

"People say time will heal, but for us, it will take a lifetime." 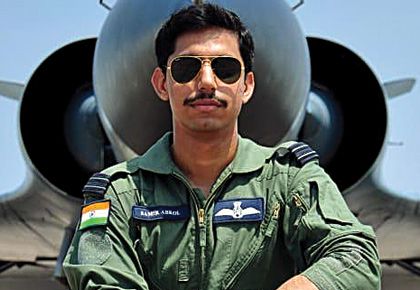 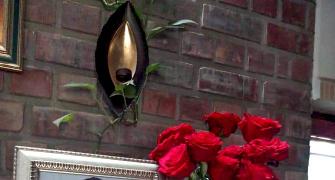