Munna Master, who has been singing bhajans for 30 years, earnestly believes the Padma Shri is a result of his devotion to gau mata.
Amrita Singh reports. The winding roads of Bagru, a quiet village about 32 km ahead of the Pink City in Rajasthan are unusually agog with excitement.

The village was thrust into the public eye after the government released this year's list of Padma Shri awardees on the eve of Republic Day.

Munna Master, 61, who has spent his entire life in Bagru, was at the local gaushala (cow shelter) when he heard he was one of the chosen ones.

Born Ramzan Khan -- he changed his name to Munna Master on all official documents in 2007 for astrological reasons -- Munna Master is a namaz-offering bhajan singer.

Munna Master lives in a modest two-bedroom house in the village's Muslim mohalla (neighbourhood) with his wife, mother and six children.

A traditional wooden door with big rusty rings for doorknobs opens into a sandy courtyard that is empty save for two plastic chairs.

The white-washed walls of his house are bare. There is no ornamentation to be seen anywhere, unless one counts the washing machine in a corner.

One of the two dingy bedrooms houses awards and certificates won by his son Feroz Khan.

The young man, an assistant professor at Banaras Hindu University, was recently at the centre of a controversy, being forced to resign from the Sanskrit Vidya Dharam Vigyan (the department that offers bachelor's, master's and doctoral degrees in the studies of ancient Indian texts, Sanskrit language and literature) because of vehement student protests.

The students believed that a Muslim could not teach them Hindu dharma and scriptures and threatened to fast to death.

The university stood by Khan, but he now teaches Sanskrit at its Faculty of Arts.

Though unaware of our impending arrival, Munna's wife and family gave us a warm, beaming welcome. "We can't believe this has happened. We're still in shock," his wife says.

Munna Master was at the gaushala when I arrived at his house and quickly made his way back from there. "Kya baat hai! Humari charcha Delhi mein bhi ho rahi hai! (How wonderful! People are talking about me even in Delhi!)," he exclaims with delight. Munna Master has been singing bhajans for about 30 years now, a family tradition that began with his father Gaffur Khan. A literary and musical man, Khan's influence on Munna was tremendous.

Khan told him stories from Hindu mythology and recited the poems of Tulsidas, Surdas and Mirabai among other Hindu mystics, which made Munna (Khan's only son) the bearer of his legacy.

Munna accompanied his father whenever the latter went to sing bhajans at the local temple. His father was a locally celebrated man and Munna wanted that for himself too.

At home, he would be trained vigorously by his father, who wanted him to carry forward the family tradition of singing bhajans. And Munna obeyed, being a staunch believer in "parampara (tradition)."

Even today, Munna Master's eyes light up with admiration and fascination as he remembers his father and speaks about his own love for Hindu mythology and poetry.

As a young boy, he devoured the Hindu epics, became well-versed with Indian history and studied Sanskrit at the Government Shastri Sanskrit Mahavidyalaya in Mahapura, Rajasthan.

"How will a person who lives in India learn about its glorious past? I am not saying one must read the Vedas, but the study of Sanskrit is imperative." says Munna Master.

Works like Kalidasa's epic poems Kumarasambhavam and Raghuvamsa form essential reading for him.

So important is the study of Sanskrit in this household that all six of Munna Master's children (four sons and two daughters) have studied the language.

"I have been asked why I didn't encourage my children to study Urdu instead of Sanskrit because I am Muslim. But that doesn't bother me. After all, knowledge is for everyone. Why bring religion into it?" he says.

That logic may seem tenuous from a practising Muslim, but Munna Master sees no contradictions. And certainly there have been strong exemplars of a syncretic practice, legendary Muslim singers of bhajans and bhakti (just think Mohammad Rafi).

"I have never been discriminated against by either Muslims or Hindus for doing this," he says.

To the urban dweller of today, the statement may seem disingenuous. But in Munna Master's village, where a community of Hindus and Muslims has grown up together -- often literally -- devotion, faith and passion seem to genuinely co-exist.

"The reason for today's communal strife is a lack of education. No community wants to learn about the other. But whatever one's religion may be, we should know about the traditions of the country we live in."

"If someone greets me with 'Jai Shri Ram', I return the greeting. What's the harm?" he responds to my unasked question. 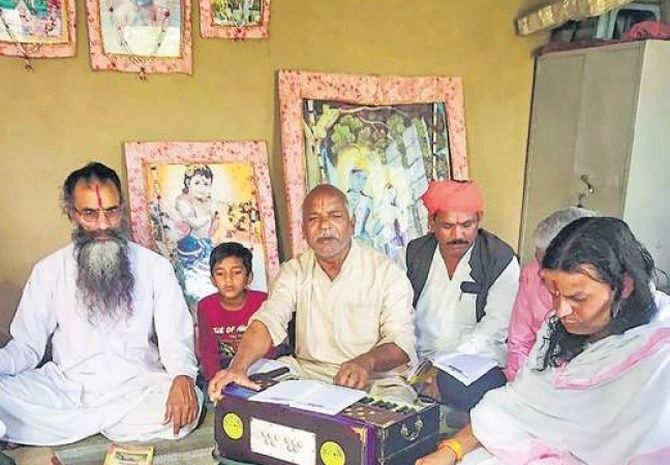 Munna Master's bhajans breathe life and melody into the village, a priest at a village temple says. "No event at the temple is complete without Munna Master's voice."

Munna's strong, clear voice echoes in the temple, without a mic, not only at major events but also on a daily basis.

As he sings a self-composed bhajan called Chanda ki chandni, the priest walks up to him and garlands him. Singing and playing the harmonium, Munna Master is content, lost in melody and lyricism.

Munna Master has been performing in different cities across the country for more than 10 years, his latest being at the home of an affluent resident of Jaipur.

"I have sung bhajans before thousands of people." he says proudly. His own compositions are now available in the compilation Shri Shyam Surabhi Vandana, a book of bhajans about Krishna and gau seva (cow service).

The latter is an equally important preoccupation for him. Munna Master opened a cow shelter called Ramdev Gaushala in 2001, headed by Champa Lal Choudhary, the founder of Gau Seva Parivar Samiti, an organisation that maintains eight gaushalas.

Every day, Munna Master visits the shelter once in the morning and again after lunch. "I am an old man with nothing to do. And there is nothing better than gau seva," he smiles.

He takes care of 850 cows in a massive, clean cow shelter along with people from the local community and members of the Gau Seva Parivar Samiti.

Munna Master earnestly believes that the Padma Shri is a result of his devotion to gau mata. "I believe in God because look at what this devotion has got me. Now I can finally build a nice house in Bagru."

Look at Munna Master, dressed in a kurta-pyjama and colourful turban, and you're unlikely to be able to identify his faith.

His name is neutral as well, disguising caste and religion. And his is a syncretic music, one that refuses to fall into the trap of established, often simplistic binaries. 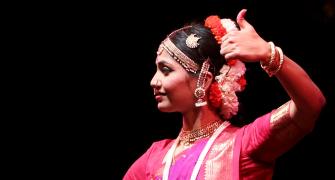 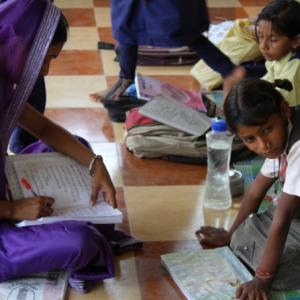 Bhajan for Krishna Kanhaiya at a Sufi saint's shrine