In just six years after his father's Rath Yatra, the BJP came to power in New Delhi, Jayant Advani points out. 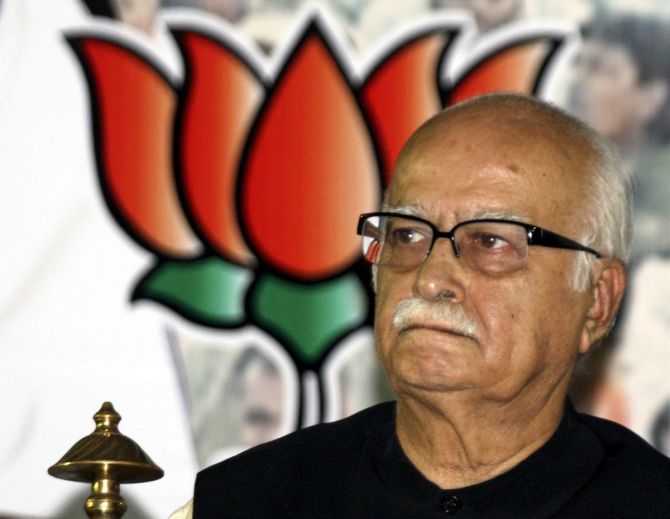 As Prime Minister Narendra Damodardas Modi performs the bhoomi puja for the Ram temple in Ayodhya, the man who was singularly responsible for bringing the issue to the nation's consciousness will watch the ceremony on television at his home on Prithviraj Road in New Delhi.

"Lal Krishna Advani is elated and extremely happy today. He sees the expression of the sentiments of a majority Indians behind the construction of the Ram mandir. He had a desire to see the Ram temple's nirman in his lifetime. The dream of his lifetime has been realised. He is delighted as the objective of his mission is fulfilled," his son Jayant Advani tells Senior Rediff.com Contributor Sheela Bhatt.

"Dada (Advani) is following all the necessary protocols due to covid and is keeping in touch with people through the phone," he adds.

In the absence of an invitation to join the ceremony, Advani will watch Modi, his former disciple, lay the foundation stone for the temple.

On July 22, a day before Advani's virtual deposition before the Babri Masjid demolition case in which he is one of the accused, Home Minister Amit Anilchandra Shah met him at his home. Jayant Advani does not wish to comment if the two men spoke about the bhoomi puja.

Post-Independence history will record that it was Advani, one of the shrewdest Indian politicians, who made the Ram temple at Ayodhya a possibility by taking out the Rath Yatra from the symbolic Somnath temple in Gujarat on September 25, 1990, to travel to Ayodhya.

Permission was then denied to Modi and his team of Bharatiya Janata Party workers to start the yatra from inside the Somnath temple complex, forcing Advani to set off by garlanding Sardar Vallabhbhai Patel's statue in the front of the complex.

Modi was then in charge of Advani's Rath Yatra, steering it through 600 villages in Gujarat before it crossed over into Maharashtra.

Recalls Jayant of his father's endeavour: "His Rath Yatra was historic, he mobilised public opinion in favour of building the temple. His journey from Somnath to Ayodhya was in sync with the people's aspirations"

"Advaniji's Rath Yatra was an expression of the people's desire for the temple, but at the same time it completely changed the political narrative," Jayant adds.

"Till the 1990s Indian politics was all about the Congress versus others, but the tremendous response from the people to the Rath Yatra helped the BJP come to the centre-stage of Indian politics. In just six years the BJP came to power in New Delhi for 13 days in 1996."

"Since the Ayodhya verdict in November 2019," Jayant adds, "Dada is very happy, he is extremely satisfied with the judgment. He always wanted a grand temple where Shri Ram was born."

"We feel happy that his hard work, his commitment to ideology and the prayers of millions of Indians have fructified."