'He was a nobody then.'
'And whatever little his contribution was there, it was restricted to Gujarat.' 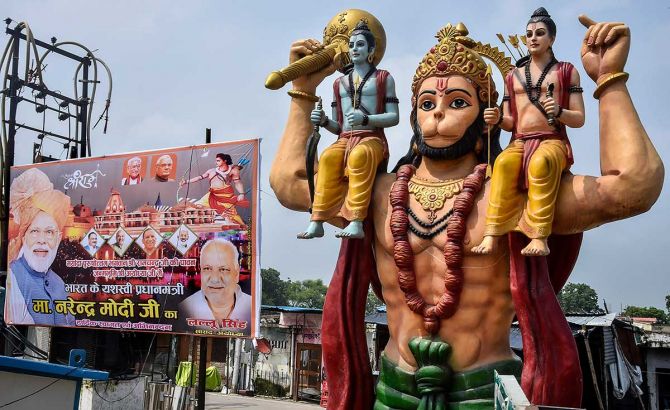 Wednesday bhoomi puja for the Ram temple at Ayodhya marks the culmination of a three decades-long struggle.

The Bharatiya Janata Party officially co-opted the Ram Janambhoomi issue at its Palampur national convention in 1989, following which its then president Lal Kishenchand Advani rolled out his rath yatra to mobilise sentiment in favour of the temple at Ayodhya.

Wednesday's bhoomi puja ceremony will see guests from various spiritual paths in attendance while the dais is reserved for four men and a woman.

Syed Firdaus Ashraf/Rediff.com speaks to Suman Gupta, a senior journalist who has covered the Ayodhya movement for over 30 years, about the contribution of these five individuals who will be present on the dais to the temple movement.

Gupta, a well known Hindi journalist based in Lucknow, covered the Babri Masjid demolition on December 6, 1992, as a reporter for the Jan Morcha newspaper. She had taken a camera along with her to report on the event, and was among the many journalists who were beaten up by kar sevaks that day in Ayodhya. Gupta submitted a statement on what happened to the Liberhan Commission of Inquiry set up to inquire into the demolition. She also gave her account of the demolition to various courts.

No one at that time (1985 to 1992) counted Modi's contribution in the struggle for the Ram Janambhoomi movement. He was a nobody then. And whatever little his contribution was there, it was restricted to Gujarat state.

It was from Gujarat that L K Advani started his rath yatra, from the Somnath temple, in the late '80s.

Nobody knew Modi then in Ayodhya or even Uttar Pradesh for that matter from 1984 to 1992. Modi had no contribution for the Ram temple in Ayodhya till 1992.

The first time his name came into the picture was when kar sevaks, after doing shilanyas in Ayodhya, went back to Gujarat in that ill-fated train and were burnt to death in Godhra in 2002.

Modi became a Hindutva icon due to Godhra, and not Ayodhya.]

He too had no contribution to make in the Ram Janambhoomi movement which started in the mid-'80s.

It is Yogi's guru Mahant Avaidyanath and the latter's father Dada Digvijaynath. It was during Digvijaynath's time that Ram idols was placed under the Babri Masjid dome.

Yogi's guru Mahant Avaidyanath was associated with the Vishwa Hindu Parishad when he formed a samiti for the Ram temple and he was president of that samiti in 1984.

Yogi Adityanath was very young then and therefore could not have been present. His first role for Ram Janambhoomi at best could be for the kar seva in the late 1980s, and from Ayodhya he went to Gorakhnath.

Therefore, I feel Yogi's contribution in the struggle for the Ram Janambhoomi is not worth mentioning.

He too was not in the forefront of the Ram Janambhoomi movement.

If you go back in history you will find out that the RSS was behind the curtain and supporting the Ram Janambhoomi movement. They never came out in front, but always worked in the background.

They pushed their other organisations, notably the Vishwa Hindu Parishad, in the forefront to lead the Ram temple movement. They only came out in the open after December 6, 1992.

Mohan Bhagwat too was in the background as an RSS member. They work methodically and systematically in a process which is very secretive so no one knows who was playing what role then.

Decisions were being taken by RSS in the background as to how to lead the movement, but in the forefront they were pushing the sadhus of the Vishwa Hindu Parishad.

They were only doing campaigns and organising people to watch movies on the Ram temple.

Yogi Adityanath for the first time said openly last week that the RSS has a big role in the Ram temple movement. Interestingly, the RSS has never come out with such a statement.

In fact, the BJP too came into the picture only in 1989 after it passed a resolution at their Palampur convention supporting the construction of a Ram temple at Ayodhya.=

He is a sadhu and mahant and one of the accused in the demolition of the Babri Masjid.

A vice-president of the VHP, Das was chief of the Ram Janambhoomi Nyas, a trust formed by the VHP for the construction of the temple.

And going by records he has made the greatest contribution to the Ram Janambhoomi movement compared to that of Narendra Modi, Yogi Adityanath or even Mohan Bhagwat.

Now he is the president of the Shri Ram Janambhoomi Teertha Kshetra Trust.

He is always open to invitation from political parties to attend their functions.

Kar sevaks who used to come at that time used to stay at his home, but then that is always the case. Many sadhus stay at his place even now.=

He is very low profile and has never involved himself in any controversy. He has always participated in the Shaurya Diwas (victory day) celebrations, which is how they commemorate December 6, 1992.

She is present on the occasion only because she is the governor of Uttar Pradesh.

Champak Rai, who is general secretary of the Ram Janambhoomi trust, says even Yogi Adityanath is present on the occasion because he is the host of the event.