'They will somehow survive the pandemic, but if these laws are not amended for the benefit of farmers, or is not scrapped altogether, they will surely die of penury and exploitation.' 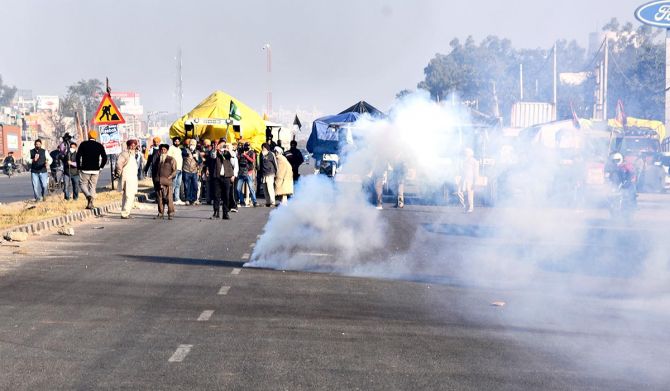 Sombir Sangwan, the Independent MLA from Dadri in Haryana's Charkhi Dadri district, resigned as chairman of the state's Livestock Development Board.

Introducing himself as 'Comrade', Sangwan, who leads the state's Sangwan khap and is also one of the seven independent MLAs supporting the Manoharlal Khattar government, tells Prasanna D Zore/Rediff.com that he is reconsidering his support to the state government in the wake of the ongoing farmers's agitation demanding guaranteed MSP in the three farm Laws enacted by the Narendra Damodardas Modi government.

"I am rethinking about my support to the Haryana government. Wait for a few days. Whatever will happen will be in the best interest of farmers," he says about his intention to withdraw support to Khattar's Bharatiya Janata Party government.

"I cannot continue as the chairman of a board to which the Haryana's BJP government appointed me because of mistreatment of farmers by the state government," he says.

"The Union government also doesn't want to listen to the farmers. Being the leader of the Sangwan khap, that was the only honourable option left for me and so I resigned," he says justifying his move.

"There was no pressure on me from my farmer brothers. I resigned because I want to empathise with the cause of my farmer brothers. Their plight is my plight. Their problems are my problems," says Sangwan who was on his way towards Haryana-Delhi border when he spoke to Rediff.com.

Sangwan says the farmers have begun to believe that the Modi government will remain deaf to their plight.

"I cannot sit quiet. I am going towards the Haryana-Delhi border with other farmers from Haryana's Sangwan khap to protest against the three Farm Acts," he says.

When asked about the outcome of the farmers's agitation and the duration for which it will continue, he says, "Whatever has to happen will happen. I will live with them, I will die with them."

"The farmers are very angry as these three farm laws will destroy their livelihood and will only benefit poonjipatis (capitalists). Something is wrong somewhere. Otherwise, you won't see so many farmers out in the streets in this bitter cold," Sangwan says about the agitating farmers.

"The farmers fear that these three laws will kill farming and big private players will benefit by stocking foodgrains and selling them at a higher price even as they will purchase the same from farmers at lower prices. These three Farm Acts are made to exploit the poor and farmers."

About the stalemate in the talks between the government and agitating farmers, he says, "Let the Modi government remain adamant. The farmers will also intensify their agitation."

"These three farm laws a bigger pandemic than COVID-19 for farmers. They will somehow survive the pandemic, but if these laws are not amended for the benefit of farmers, or is not scrapped altogether, they will surely die of penury and exploitation," he says ,when asked if farmers are not afraid of their health due to the pandemic.

"There are only two big industrialists in India today. Who else will these three laws benefit?" he asks without naming the whipping boys of the farmers's agitation. 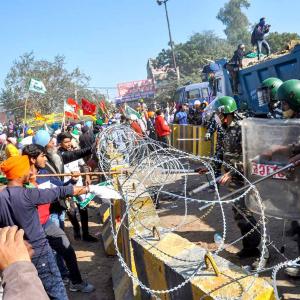