News
Business
Movies
Sports
Cricket
Get Ahead
Money Tips
Shopping
Sign in  |  Create a Rediffmail account
Rediff.com  » News » These COVID-19 warriors are an inspiration for India

'We got so many calls after the attack.'
'Loved ones told us forget all this, nothing was more valuable than our lives.'
'But we said, 'No, this wasn't the way forward -- the people, society, the country needs us at this time.'
Dr Trupti Katdare and Dr Zakia Syed tell Archana Masih/Rediff.com their inspiring story. Dr Zakia Syed and Dr Trupti Katdare first met during their induction as young doctors nine years ago. The training for their appointments as doctors in the government-run public health centre in rural Madhya Pradesh lasted for a month, but they ended up with an everlasting friendship.

"We are besties till death," says Dr Trupti, chief medical officer at the public health centre in Shipra near Indore, as she refers to Dr Zakia, who is in-charge of the primary health centre in Kampel, 40 kms away. IMAGE: Dr Trupti Katdare and Dr Zakia Syed with other doctors and team members at the Shipra primary health centre.

For the past six weeks, the two doctor friends have been working together at the frontline of the battle against COVID-19 in Indore. They have left their families and moved into a hotel to protect their loved ones from the infection. Dr Trupti is especially concerned about her in-laws who have diabetes and asthma.

When she wanted to wish her husband on his birthday on April 29, they went to her home and wished him from outside.

Dr Zakia last saw her husband and children aged 5 and 9 two weeks ago. She stood outside the gate of her home and had a cup of tea as her son and daughter kept asking her, 'Mama, when will you come home?' 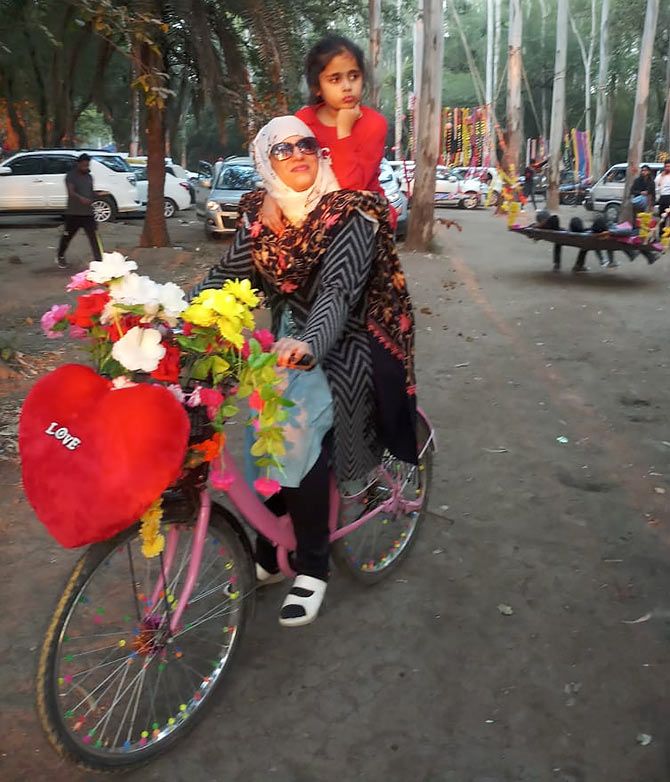 Every morning, the two friends accompanied by paramedics and government staff, set out, criss-crossing the lanes and by-lanes of a large area which falls under three police stations. They deal with positive cases, identify contacts, treat symptomatic cases, get samples collected, send high-risk individuals to quarantine centres and positive patients to a treatment facility.

They have identified 160 positive cases so far and screen around 200 people every day.

Last month, an incident they encountered became one of the triggers for a new law that will protect doctors from acts of violence. Doctors Zakia and Trupti were attacked by a mob while talking to the mother of a man who later tested positive. They were told that the man was not home. He was apprehended by the police two days later.

"We asked for his mobile number and said he should not be moving around in the first place," remembers Dr Trupti.

This was the third consecutive day in that specific locality and they had never encountered any problem before. IMAGE: The doctors with their team members.

"Suddenly there was a crowd screaming 'maro maro' running towards us. They started throwing stones. The sub divisional magistrate quickly brought the car in front of us to shield us from the stones. I almost fell. Dr Zakia said she will confront and explain to them. I told her the hostile crowd was in no mood to see reason and pulled her into car. As we drove, the mob was running behind us, hurling stones," remembers Dr Trupti, over the phone at the end of a 10-hour shift.

"It was very scary."

"We sustained some blunt injuries where the stones struck us. We were shocked. Shaken," adds Dr Zakia, the first one in her family to become a doctor, fulfilling the dream of her father who worked in the quality control department at the National Textile Corporation before it shut down. At one time, Indore was known for its three big textile mills.

The doctors filed an FIR. Thirteen people were arrested and the National Security Act was invoked against four. The news of the attack was quickly picked up by the media within hours. IMAGE: Dr Trupti Katdare out in the field.

"Our worried husbands phoned us, we got so many calls. Loved ones told us forget all this, nothing was more valuable than our lives. But we said, 'No, this wasn't the way forward -- the people, society, the country needs us at this time," says Dr Zakia, who wakes up at 4 am and has oats or rusk with a cup of tea as a pre-dawn meal during Ramzan.

In the evening, she breaks her fast with Dr Trupti and Dr Piyush, the third doctor in their COVID-19 response team.

They make tea in the electric kettle in the room and sit down together over tea and dry snacks.

"We said we will not surrender and went back to the same gali the next day after the attack. It was our duty, we could not leave those people until we had screened them and provided treatment," says Dr Trupti, who attributes her commitment for public service to her father's zeal for social work.

"They apologised and told us 'Do not leave us. It will never happen again.' Now the scenario has completely changed, they cooperate fully and willingly come to be screened and quarantined."

"After the incident, if either of us had said we will not return, we may not have gone back. But we drew strength from each other and were both determined to finish what we had started," says Dr Trupti and credits the health department heads, the district administration, family and friends for boosting their morale.

They later discovered that the attack was instigated by rumours and negative messages on social media. Dealing with a new virus that spreads fast, the two main challenges have been to convince people that though extremely contagious, the disease is not as serious as perceived.

"80% don't have any symptoms," says Dr Zakia. Since they work in an area with low socio-economic indices, the second challenge is making people follow social distancing and hygiene.

"Since many are uneducated, it takes time to convince them. Also, it is not easy to make people leave their home and go to a quarantine centre for 14 days," she explains. A few days ago, they had to screen a community of transgenders after one person tested positive. When the panic-stricken community refused to allow them entry, the doctors had to persuade them with tact, patience and kindness.

"We were able to convince them with our words and screened 50+. They were so happy with our services that they clapped, distributed sweets and sent us away with their blessings," says Dr Zakia, giving a glimpse into the phenomenal work public health officials have been doing around the country during this emergency.

The doctors set out every morning in a car assigned to their team. In the early days, they would go without drinking water for six hours at a stretch because they would be nervous about removing their masks in an area with several positive cases, but not anymore.

"We have been in the field since March 28 and have travelled quite far in this fight against COVID-19. We are deep into it. Now that we have gained some experience, we try to protect ourselves the best we can," says Dr Trupti. IMAGE: The team at one of their consulting sessions.

They have established a protocol where they take a water break after four hours which is usually the time it takes to deal with screening, testing, contact tracing and shifting a suspected case to the hospital.

"In the summer, you sweat a lot inside the PPE kit. We try to cover the positive area in one stretch so that we can take the PPE off and eat lunch," explains Dr Trupti.

"We don't waste PPE because they are very precious. While screening other contacts, we use double masks, gloves and caps."

There is no fixed time for lunch which they mostly eat inside the car. Observing roza has caused no problem on the field, says Dr Zakia. Roza strengthens your will power, it detoxifies both your body and soul. I haven't felt weak and when you have your friend next to you, let me tell you, how can you feel weary?" she says with a ring in her voice that you can almost see her smile across the telephone line.

The doctors have planned a trip to Udaipur once the crisis is behind them.

They will continue their field duties throughout this month and are undaunted by the road ahead. "Screening is crucial. It's good that positive cases are being identified because then you can isolate, treat and prevent it from spreading," points out Dr Trupti, who misses her primary healh centre and takes great pride that it has a 5-star ranking by UNICEF.

"I hope life returns to normal and I feel it will."

While they battle on in the trenches, their homes are being held together by their husbands who have learnt how to cook and clean in their absence. IMAGE: Dr Trupti visits her husband on his birthday on April 29.

"My husband keeps encouraging me. With the family by your side you can face any adverse situation," adds Dr Trupti. The doctors have 24 quarantine centres in their containment area and have provided their numbers to those under quarantine should they need any assistance.

When a set of people were leaving at the end of 14 days of quarantine, negative reports in hand, their team received a standing ovation.

"It gave us goose-bumps," says Dr Trupti. "We've learnt never to give up. If soldiers can fight for the country, so can we."

"Some people told us we are soldiers too," says Dr Zakia, "In white uniforms." 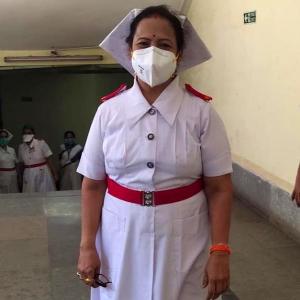