News
Business
Movies
Sports
Cricket
Get Ahead
Money Tips
Shopping
Sign in  |  Create a Rediffmail account
Rediff.com  » News » 'Amit Shahji, Naddaji, all of us do the same work'

You may be an MP or an MLA; when we go to Bengal, we go as cadre.'
Swarupa Dutt/Rediff.com speaks to BJP leaders deputed to go to West Bengal on election duty. 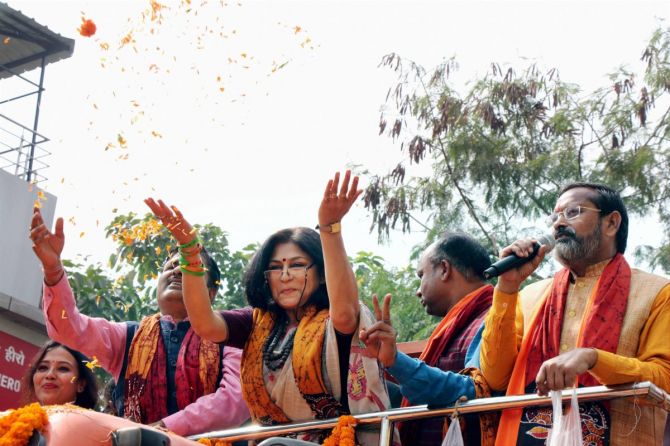 Bengalis of a certain vintage have grown up hearing the word 'cader' where the 'ca' pronounced as in the word 'cad'. The rest of the world would tell you, it's cadre.

That was the time of the Left Front reign in West Bengal.

The cadre entered your home insidiously. An LPG gas connection, admission to a school, a job at the government college. The cadre was a seemingly benign face demanding chaanda (donation) for the parar (local) library.

A disciplined rank and file, young (generally in the age group 18 to 30), obeying rules and following orders, passed down the line of command originating at 31, Alimuddin Street, the nerve centre of the Communist Party of India-Marxist.

Cadre also implied a multitude, like the marching thousands of Mao Xedong or the Russian army at Red Square.

Everyone was Baamponthi (Left leaning or owing allegiance to the Left). Your maid, your family, your universe. Everyone.

In 2011, Mamata Banerejee's Trinamool Congress took over Writers Building and its karmi (workers) wrested control from the CPI-M cadre.

But unlike Basu's cadre, Mamata's party workers lacked their unquestioned obedience and allegiance to a central command. Neither did they have the discipline to get the party's mandate writ on the people nor did they believe in anything but personal gain.

The 'C' word rules the BJP.

They call their cadre karyakartas, they call themselves soldiers, unified by a maniacal, almost feverish, allegiance to their Leader.

"BJP is the only party in India and possibly in the world that is blessed with a cadre which has this kind of strength in numbers. In 2019, BJP had a membership of over 35 lakh in Bengal. That has gone up by a couple of more lakhs by now, I'm sure. Tell me which party can boast of numbers like this?" asks Pradipsinh Vaghela, the BJP's Gujarat secretary.

Vaghela and 21 other party leaders from Gujarat are headed to West Bengal this month, to help out in the elections.

They have been tasked to look after 109 assembly constituencies, which the party deems critical to winning the state from the incumbent.

Some of these names like Pradhan, Rathore, Singh or Dubey are Union ministers and members of Parliament.

Others like Mangal Pandey, Ashish Shelar or Satish Upadhyay are leaders in their states.

When the BJP battles an election they send in soldiers, in waves, in phalanxes, in formations, distinguished by the state they have to win.

Each of the BJP leaders Rediff.com spoke to say they are ordinary karyakartas of the party, nay disciplined (always that word) soldiers and be it Union Home Minister Amit Anilchandra Shah or BJP national President Jagat Prakash Nadda, each and every member of the party has the same job -- to work in unison to achieve their goal.

"It doesn't matter what your background is. You may be an MP or an MLA or you may not hold any legislative post; when we go to Bengal we go as cadre. As party workers. If one of us falter, the other steps in to help," says Vaghela who worked for the party in the December 2020 Greater Hyderabad Municipal Corporation election.

"We are supposed to do whatever the local West Bengal unit tells us to do and we will do that, no questions asked<' says Ashish Shelar, the BJP MLA from Bandra west in north west Mumbai and former president of its Mumbai unit.

"The BJP is one family, we always work together as a family. There is nothing new in the party sending us to Bengal. It happens in every election."

News agency Press Trust of India says around 109 assembly constituencies have been marked as critical for the party's dream to form a government in the poll-bound state. The BJP's reach to voters in these constituencies will be supervised and manned by these 22 BJP leaders.

Ask Basanta Kumar Panda, the Lok Sabha MP from Kalahandi, about what happens in the BJP's poll war-room during the elections and he is flabbergasted. "How can I tell you? It is confidential. But what I can say is right now is that I have no idea what we will be doing in Bengal. I am awaiting orders, I will obey the orders and get to work."

"Like everyone else in this party, I am simply a disciplined soldier of the party," adds Panda. "Whenever and whatever capacity the party needs me, I will be there."

Since the dates of the Bengal assembly election are yet to be announced, Panda says even if the party wants him to camp in Bengal for the next few months without returning to Odisha for even a day, he is fine with that.

"We don't ask questions. Speak to anyone in our party and they will tell you that the party comes first, not your family, nothing else," says Panda, "because the party IS the family."

Nitin Nabin, the BJP MLA from Bankipur in Bihar, is thrilled at being given the opportunity to serve the party in Bengal and cannot comprehend why he would want to ask questions to the high command about the deputation.

"What is there to ask? I have been told to go and I will go. I am looking forward to going to Bengal. I've been there earlier as well, and I believe the people will see why they should vote for us."

Shelar says the BJP's confidence in winning Bengal comes from its organisational strength, the promises made to the its people which they know the party will fulfil, the successful yojanas (schemes) implemented by Prime Minister narendra Damodardas Modi in other BJP states and anger against the Mamata Banerjee government.

He adds that the sheer numbers of its cadre are something that other parties do not have. "We are proud of it and we will leverage it to win," Shelar points out and says his organisational skills were put to use during the Hyderabad municipal polls as well.

"See, it's nothing new. Workers and leaders from Uttar Pradesh and Bihar had also come to Maharashtra for the polls," says Shelar.

Adds Nabin, "It doesn't matter what you are in your home state, once you are on deputation, you are simply a party worker. And let me tell you, there are no ego issues. Why should there be? We are all working for a common cause, bringing in BJP rule and the attendant progress and prosperity."

"Humein jahan lagaya jaata hai, woh bhumika mein hum kaam karte hain. We work in whatever capacity we are told when we go on deputation. I wouldn't call it a central command. Our party is not a bureau. We are family, we are also soldiers. We all work together," adds the MLA, who has won election to the Bihar assembly four times.

"Amit Shahji, Naddaji, all of us do the same work. There is no difference."

The decision to depute these 22 leaders was communicated to them at a virtual meeting presided over by the BJP's national Joint General Secretary Shiv Prakash. PTI reports that BJP President Nadda is likely to meet these leaders in Kolkata on February 25 or February 26.

These 22 leaders have yet to be told their precise job function, and as Panda says, that will happen when they reach Bengal, probably by the end of this month.

The fact that there is still a lack of clarity in the precise scope of work in Bengal, the number of days they will spend in the state or for that matter when they will be called upon to set up camp, doesn't bother them.

Says Shelar, "Our state unit will decide where and in which area I have to help the party. It will be communicated to me as when required. Language is not a problem, because we won't be doing public meetings. I think I speak for all our leaders when I say we are waiting to go to Bengal."

Panda says there is no prep needed. Whenever the party holds elections, whether Lok Sabha, assembly, municipal or panchayat, the party has always sent him on deputations -- Delhi, Karnataka, Lucknow, as state election chief for Sikkim.

While most of these leaders will not be doing rallies or meet-and-greets with the electorate, Shelar assrts that language is not a problem. "It is not difficult to understand 'Jai Shri Ram', irrespective of what region you come from."

"We as Sangh Parivar or BJP are proud to chant 'Jai Mahakali' as well. In fact, I am shocked to see somebody (alluding to Mamata Banerjee) getting annoyed by people chanting 'Jai Shri Ram'. The Bengali people will react to it by voting her out."

While Amit Shah has declared that the BJP will win over 200 seats in the 294 seat Bengal assembly, these leaders say numbers are important in terms of a goal, but it is how you go about strategising to get those numbers that finally decide the outcome.