First, Mamata's pampering of lawless elements masquerading as Trinamool Congress cadres.
Second, her promotion of her nephew, Abhishek Banerjee, as a possible successor and the adoption of Prashant Kishor as her political adviser.
Neither has gone down well with either her followers or the public, observes Amulya Ganguli. 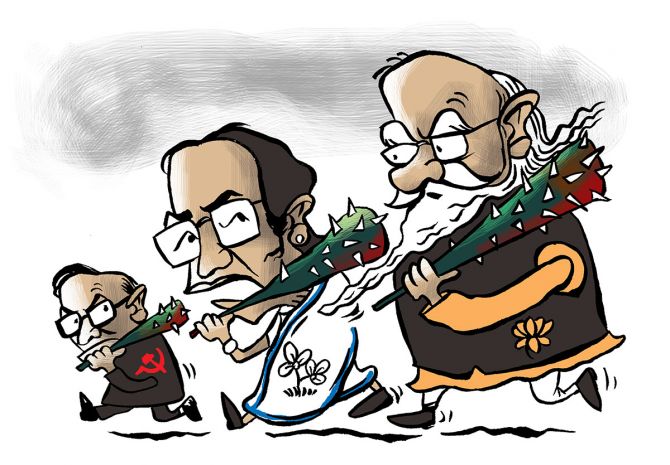 There are two reasons why Mamata Banerjee is seemingly fighting an uphill battle against the BJP in West Bengal.

What should normally have been a cakewalk for her has become a deathly struggle because sizeable sections of the people have turned against the chief minister.

The reasons for their disenchantment are, first, Mamata's pampering of lawless elements masquerading as the Trinamool Congress's cadres.

And the second is her promotion of her nephew, Abhishek Banerjee, as a possible successor and the adoption of the ubiquitous election strategist, Prashant Kishor, as her political adviser.

None of these steps has gone down well with either her followers or the general public.

Hence, the departure of quite a few party old-timers in search of greener pastures promised by the BJP and the deep disquiet among the ordinary people.

But the chief minister would not have been in such trouble if she had kept out the rowdies who flocked to her party from the CPI-M in the aftermath of the Left Front's defeat in 2011.

Why she didn't do so is something of a mystery.

But a possible explanation is that having set up her party only a decade before becoming the chief minister, she needed a base of cadres which she didn't have despite her popularity.

The Trinamool's rank and file initially comprised those Congressmen who had joined her party along with her after leaving the Congress.

Having defeated the Marxists after their three-decade-long rule in the state, Mamata apparently did not feel secure enough till her cadre strength at the lower levels had increased.

The reason for her sense of insecurity is understandable.

She had once been attacked by a CPI-M goon so severely in the heart of south Kolkata that she had to spend a fairly long time in hospital.

Violence was at the centre of the lives of these hoodlums -- violence first against the Congress in the 1960s, then against fellow Leftists of the Revolutionary Socialist Party and Forward Bloc as the CPI-M established its primacy in the state in the 1970s and 1980s and then again against the Naxalites when they challenged the CPI-M's hegemony.

The mobsters were also active in the field of trade unions with tactics such as the gherao of corporate officials which led to the flight of capital from which West Bengal is yet to recover.

Under Trinamool, too, they continued their depredations, the most notorious example of which was during the 2018 panchayat elections.

Apart from such vandalism, Trinamool cadres earned infamy for the 'cut money' phenomenon which meant that no real estate or small-time business transactions could be carried out without the payment of a portion of the monetary deal to the hooligans.

Didi or elder sister, as Mamata is called in West Bengal, is paying the price for these transgressions.

If she had reined in the hoods, she would have been in a better position.

But, then, she herself was never a stickler for propriety, having danced on top of Jayaprakash Narayan's car in Calcutta (as Kolkata was known then) just before the Emergency.

Nor can she complain of the opportunism of those who are deserting her now, as she had been in the BJP earlier and even having been a minister in Atal Bihari Vajpayee's Cabinet.

Bengalis may be thankful to Mamata for ending the rule of the Leftists who had ruined Calcutta's status as India's No 1 metropolis with its mercantile houses, academia and night life.

But that is as far as her good deeds go, for she followed in their footsteps to establish a mini-jungle raj at least where property owners are concerned.