Wuhan, the epicentre of the novel coronavirus pandemic, on Wednesday resumed bus services within the city for the first time since the nine-week lockdown even as 47 new imported cases were reported from the country, threatening a second wave of infections. 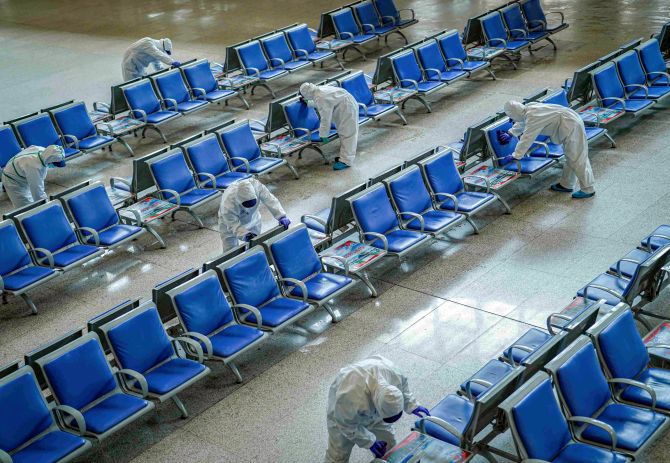 IMAGE: Workers in protective suits disinfect a waiting hall at the Wuhan Railway Station which has been closed due to the novel coronavirus disease outbreak in Wuhan, Hubei province, China. Photograph: Reuters

China on Tuesday decided to lift the three-month lockdown on more than 56 million people in the central Hubei province.

However, the prolonged lockdown of Hubei's capital Wuhan will end on April 8, lifting the mass quarantine over the city with a population of over 11 million.

While Hubei and Wuhan has not reported any new COVID-19 case, four people died in the city taking the death toll in China to 3,281, the National Health Commission said.

China on Wednesday said that no new domestically transmitted case was reported on the Chinese mainland on Tuesday.

Forty seven new imported COVID-19 cases were reported in the country on Tuesday, taking the total of such cases to 474, it said.

The Chinese foreign ministry said on Tuesday that majority of the imported cases are the Chinese nationals returning from abroad.

Of the 427 confirmed imported cases reported on March 23, 380 are Chinese and the rest 47 are foreign nationals.

Also on Tuesday, four deaths and 33 new suspected cases were reported on the mainland with three of the deaths reported in Hubei.

The overall confirmed cases on the mainland reached 81,218 by the end of Tuesday. This included 3,281 people who died of the disease, 4,287 patients still being treated and 73,650 patients discharged after recovery, the NHC said.

It said 134 people were still suspected of being infected with the virus.

Meanwhile, bus services began in Wuhan for the first time since January 23 as a bus departed from its terminus at Hankou railway station at 5:25 am on Wednesday, state-run Xinhua news agency reported.

The city resumed a total of 117 bus routes starting Wednesday, around 30 per cent of the city's total bus transport capacity, the municipal transport bureau said.

It would resume outbound transport services from April 8.

Apart from the driver, a safety supervisor is also present on each bus whose duty is to make sure all passengers are healthy as their health code is being checked before boarding.

People in Wuhan will be allowed to leave the city and Hubei Province, if they hold a green health code, meaning no contact with any infected or suspected COVID-19 cases.

"For those who do not use smart phones, they should bring with them a health certificate issued by the health authorities," said Zhou Jingjing, a safety supervisor aboard a bus departing from Wuchang railway station complex.

From Saturday, six metro lines are expected to reopen to the public. The service time will be published on the stations.

On January 23, Wuhan declared unprecedented traffic restrictions, including suspending the city's public transport and all outbound flights and trains, in an attempt to contain the epidemic within its territory.

Similar restrictions were later introduced in other areas in Hubei. 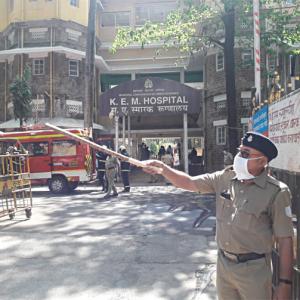