News
Business
Movies
Sports
Cricket
Get Ahead
Money Tips
Shopping
Sign in  |  Create a Rediffmail account
Rediff.com  » News » The speech Modi should have given

I know the sight of me at 8 pm strikes fear in your hearts but do not be afraid, my dear countrymen.

I have come here today not to scare you, but to make you feel comfortable.

I know these are dark and bleak times. The news is not good from any part of the world, on any channel or in any newspaper. But I want to reassure you, as your humble Pradhan Sevak, quickly and simply and in as few words as possible, that there is no need for any Indian in any part of the country to fear.

You may be wondering why I needed to speak to you directly once again, just 120 hours after I had done so last Thursday night. I am doing so because I realise that it is still not too late to acknowledge three simple truths, something that was unfortunately lost in the excitement over #ThaaliBajao. 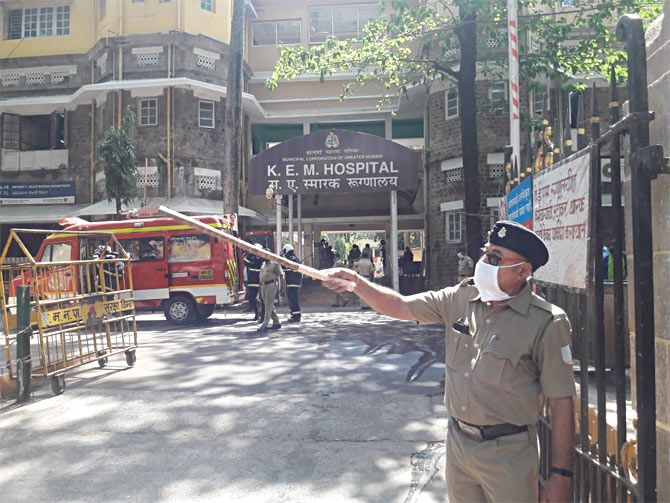 The first truth is we are facing a National Medical Emergency.

In the last few years, many people have loosely used the word 'undeclared Emergency' to describe my general style of administration. While it was mostly true as a literary device, which we were able to dispel easily, what we are facing today is a genuine medical Emergency.

I do not want you to have any doubts about it: It is a National Medical Emergency and I want to declare it as such here and now, this day the 24th of March, 2020.

I thank all of you for enthusiastically responding to my call to applaud the efforts of our doctors and nurses on Sunday, but the battle against the coronavirus has not ended. It has only just begun -- my intention was to draw your attention to its seriousness with #JanataCurfew.

That curfew was voluntary. It lasted only for a few hours. But it now needs to be implemented mandatorily, for several days and weeks, possibly a month or more.

We are at a critical state, we are in a National Medical Emergency, and I hope my government will receive your fullest cooperation.

The second truth is we were not adequately prepared for a National Medical Emergency.

Despite all the claims and promises that you may have received and forwarded on social media, my government, like other governments, here and elsewhere, has been distracted from our core responsibility of securing the lives of every citizen, rich or poor, urban or rural, man, woman or LGBT.

When we first heard of the coronavirus we should have quickly reacted, but we were distracted by the many demands that are before a government. We took our eyes off the ball. We presumed that a small virus would not become such a big threat. We thought our existing infrastructure was enough.

As subsequent events have revealed, we were wrong, very wrong.

I seek your forgiveness for this major lapse, but I promise you we will take every step necessary to ensure that it won't recur.

Once covid-19 has been satisfactorily dealt with, your government will address national health on a war footing. You have my word.

We will increase budgetary allocations, we will make your health our responsibility, and we will convey to you that the health and wellbeing of everybody rests not on playing #Antakshari, singing #GoCoronaGo or drinking #GoMutra, but with science and expertise, not superstition and obscurantism.

There is no harm in admitting that Pandit Nehru was right about the scientific temper.

The third truth I wish to convey tonight is of a more general, philosophical nature.

A puny pathogen has conveyed to all humanity that disease does not choose its target by their denomination. Indian or Chinese, Italian or Iranian, death does not look at citizenship. Hindu or Muslim, Sikh or Christian, Buddhist or Jain or Parsi, it does not look at the Aadhar card or Voter ID.

The end will come to us all, one day, some day, and all we can do is hope that it is later, not sooner.

For several months now, an unfortunate impression has gained ground around the world that my government represents only one section of the Indian population and that the rest are being hammered into submission by legislative, executive and judicial actions.

As prime minister, I take full responsibility for this deadly blow to the image of India as the land of Buddha and Gandhi, for the damage to Hinduism as a religion of inclusivity.

I should have reminded you that I represent each one of you. When it did not register, I should have repeated that message again. And again. By choosing silence over statesmanship, I let the hotheads in my party and in my government dictate the agenda and I am sorry for this.

Although the media will keep reminding you otherwise, I want you to know that to err is human. To look at every Indian citizen, every life, with the same value is divine.

The coronavirus has provided each one of us a chance to press the 'reset' button. I take this National Medical Emergency to announce a process of national healing. As of midnight tonight, my government will drop all talk of NRC and NPR, and my Muslim brethren should sleep peacefully that this is as much their country as mine.

'Sab ka saath, sab ka vishwas' was a catchy slogan -- from tonight it will be a national mission to make sure every Indian feels it. The time for rancour and retribution is over.

And, one final thought before I bid you goodnight.

We can only deal with this National Medial Emergency if we are all in it together. No one individual, howsoever powerful his projection in the public perception, is the repository of all knowledge or wisdom especially in as arcane a field as molecular biology. That is why the health minister, who is a trained doctor, is sitting alongside me as I speak tonight.

I want to assure you that Dr Harsh Vardhan and his ministry are working with the best medical brains in the world, public and private, to combat and overwhelm covid-19. No expense has been spared. But that is not all. They are working in conjunction with other ministries to ensure that everyone is on the same page and you, the citizen, is not overly inconvenienced.

As prime minister, I have reached out to Shri Rahul Gandhi who admirably flagged the coronavirus long before my government got around to it and to Shri Pinarayi Vijayan who has shown exemplary leadership in dealing with natural disasters.

We are also exploring the possibility of convening an all-party meeting to convey to Indians that this is an issue that cuts through ideological or political barriers.

In a nation of this size and complexity, these small steps might not help us deal comprehensively with a grave National Medical Emergency, but at least we would have conveyed to the world that we are one people.

If all of us stand together and join hands, the next intruder will know what it is up against.

And, finally, I want you to reassure you once again that you have entrusted your country in safe hands. It is my constant endeavour to leave India in a better shape than I inherited. Governance is a process in continuity and there is no better time than now to underline this.

I thank you for your time and patience, and at this trying moment in our nation's history, I seek your forgiveness and blessings once again.