News
Business
Movies
Sports
Cricket
Get Ahead
Money Tips
Shopping
Sign in  |  Create a Rediffmail account
Rediff.com  » News » Why is the death toll on Char Dham yatra so high this year?

Why is the death toll on Char Dham yatra so high this year?

Resumption of 'Char Dham yatra' after a gap of two Covid-marred years is a welcome development for thousands of people whose livelihoods depend on it, but the death of 78 pilgrims on way to the Himalayan temples in less than a month is causing concern. IMAGE: A State Disaster Response Force team successfully rescues a woman who had fallen into a 50-metre deep gorge near Bhairon Gadhre during her Kedarnath Char Dham yatra, in Rudraprayag, May 14, 2022. Photograph: ANI Photo/ANI Picture Service

Though the death of pilgrims on way to the high altitude shrines in Uttarakhand due to cardiac problems is something which happens every year, the toll is unusually high this season after the yatra commenced on May 3 with the opening of the Yamunotri and Gangotri temples.

A look at the data of pilgrim deaths in previous years shows that over 90 Char Dham devotees died in 2019, 102 in 2018 and 112 in 2017 during the entire season which lasts nearly six months from April-May to October-November every year.

Pradeep Bhardwaj, who heads Six Sigma Healthcare that provides free medical facilities in Kedarnath, attributed the high number of deaths to a combination of factors, including absence of an acclimatisation mechanism, weak immunity of pilgrims most of whom have Covid history, precarious weather and inadequate arrangements considering the heavy rush of pilgrims.

"As most of the pilgrims are not used to such high altitudes they should be given a break in their journey at lower heights to help them acclimatise themselves with the kind of weather they are going to confront in higher altitudes.

"They are not able to cope with the abrupt climatic change that they experience after coming from lower altitudes to the Himalayan temples located on average at a height of 10,000 to 12,000 ft," Bhardwaj , a qualified doctor told PTI.

He said many pilgrims do not come with proper clothing as they are not aware of the extreme cold conditions prevailing in the high altitudes.

"We have noticed that many of those who died on way to Kedarnath died of hypothermia which is caused by extreme cold conditions," he said.

The weather in Kedarnath often turns bad in the afternoon. A bright sunny day in no time gives way to overcast conditions with isolated rains. As there are no rain shelters within three km radius of Kedarnath, pilgrims often get drenched and are finally down with hypothermia, he said.

Of the 78 deaths so far, Kedarnath has reported the highest number of pilgrim casualties with 41 fatalities.

Weak immunity of pilgrims who have Covid history is another reason for the high number of casualties, he said.

Health checks before the pilgrims begin the arduous trek to the temples is also a must.

Drawing a comparison, he said there are 130 community kitchens on way to the Amarnath temple which is also visited by people from across the country like Kedarnath.

Health screening of pilgrims before they underake the journey to the high altitudes should be done on a larger scale , Bhardwaj said.

"Pilgrim footfall at the Himalayan temples is much higher than their carrying capacity which is causing inconvenience to them.

"Despite the government's advisory that they should not undertake the journey if they have Covid history and suffer from post coronavirus complications, they are setting out on the pilgrimage throwing all cares to the wind. It is proving fatal especially in case of the elderly," Ajay told PTI. 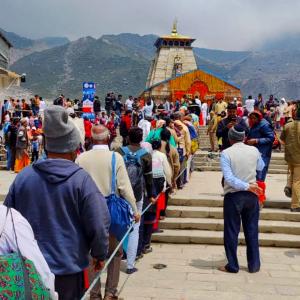