The terrorists might have got the information about the movement of a large number of Central Reserve Police Force personnel in Pulwama district which led to the high number of casualties, officials suspect. The deadliest terror attack on CRPF in recent times in Jammu and Kashmir that claimed at least 39 lives so far took place when over 2,500 CRPF personnel, many of them returning from leave to rejoin duty in the Valley, were travelling in the convoy of 78 vehicles when they were ambushed on the Srinagar-Jammu highway at Latoomode in Awantipora in south Kashmir around 3.15 pm.

Usually, about 1,000 personnel are part of a convoy but this time it was a total of 2,547 personnel.

Not ruling out the violation of Standard Operating Procedures when such a huge movement of central forces is taking place in the troubled state, officials requesting anonymity said a clear picture on loopholes, if any, will be known after a thorough probe.

“Such a large movement of troops must have been known to a lot of people. There is a possibility of this information reaching the terrorists,” a security official suspect.

Moreover, the number of personnel travelling back to the Valley was high as there was no movement on the highway for the last two to three days because of bad weather and other administrative reasons, they said.

The experts of National Investigation Agency and National Security Guard have been asked to assist Jammu and Kashmir police in the investigation of the attack.

All aspects of the attack will be probed by the concerned agencies, they said.

The security forces have not faced such a severe terror attack in recent time in the Valley.

On September 18, 2016, four terrorists had attacked Indian Army brigade headquarters in Uri at 5.30 am in which 19 soldiers were killed.

It is the second deadliest attack faced by the CRPF since 2010 when a team of naxals had ambushed its troops in Dantewada in Chhattisgarh killing 76 personnel of the force.

Seven years later, the force again lost 25 of its men to a similar attack by naxals on April 24, 2017, in Sukma, Chhattisgarh.

In the Valley, the force had faced an ambush on June 25, 2016, when Lashkar-e-Tayiba militants attacked its convoy in Frestabal area of Pampore on the Srinagar-Jammu National Highway killing eight of its personnel. 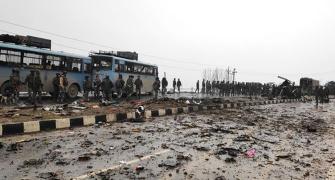 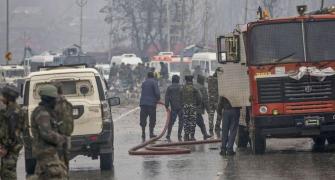