West Bengal Bharatiya Janata Party chief Dilip Ghosh on Saturday said that the party has to fulfil its long-cherished mission of winning the state not only to expand its ideological footprint but also to secure India's eastern borders, which have turned into a 'transit point for terror elements' trying to create unrest in the country. 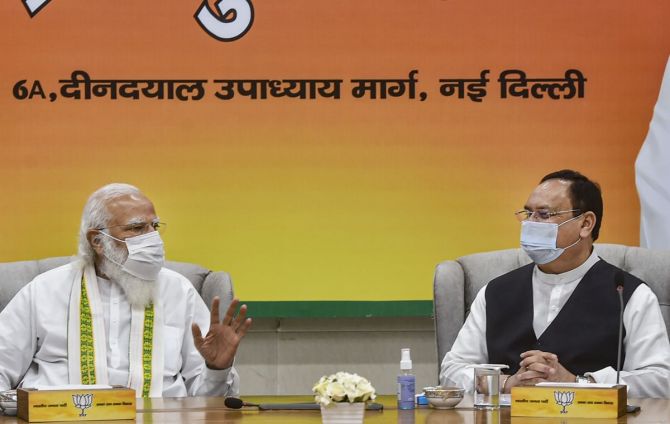 Amid an exodus of Trinamool Congress members to the BJP ahead of the assembly elections, Ghosh conceded that the saffron party needs people from other political outfits to come to power in the state, after which it will put an end to the practice.

In an interview with PTI, Ghosh said the BJP's ideology, its expanding organisational strength, and Prime Minister Narendra Modi's popularity are its strengths, while the lack of popular faces in the party at the state, district and local levels is one of the drawbacks for the saffron camp in the elections.

"West Bengal is important for the BJP not only because of our origin in the state as Jan Sangh founder Syama Prasad Mookerjee was born here but also because the country's security is linked with it. We have waited for long for an opportunity to come to power in the state. This is our mission and challenge," he said.

"India's border with Bangladesh that West Bengal shares is the most unsafe in the country. The Centre has been able to bring peace in Kashmir and other disturbed areas but the eastern borders have turned into a transit point for terror elements to infiltrate into the country to create unrest," he said.

Exuding confidence of coming to power in West Bengal with a two-thirds majority, Ghosh said the TMC government has failed and betrayed the aspirations of the people of the state, who had voted it to power in 2011.

Elections to the 294-member assembly, poised to be a stiff contest between the BJP and the Centre, will be held in eight phases from March 27 to April 29.

The results will be declared on May 2.

The BJP has been able to 'knock the door of the seat of power' due to the martyrdom of hundreds of party workers and the indomitable spirit of the activists in the state but lack of popular faces at various levels is a drawback for the party in the elections, he said.

"Our ideology, Modiji's popularity and the indomitable spirit of our workers are our strengths but we need several popular faces at state, district and local levels to take on the TMC.

"The ruling party in the state has several faces not because they are efficient but because they have been in power for 10 years," he said.

Asked whether the rift between old-timers and newcomers will affect the BJP in the elections, he said that everyone has to abide by the party's rules and regulations.

"The BJP is getting strengthened in West Bengal with each passing day. People from other parties including the TMC are joining us. If we don't take them, how will we grow?

"Everybody can't get a ticket. Only some will be candidates and others will have to work as per the responsibilities assigned to them. No one is above the party," he said.

Saffron party sources and media reports have indicated that the Rashtriya Swayamsevak Sangh is not happy with the BJP inducting certain leaders from other political outfits.

Ghosh said although party hopping can't be supported, there are certain necessities in electoral politics.

"Party hopping is not a good thing and we will only stop it (after coming to power in West Bengal). But numbers play an important role in democracy. We need to get the numbers (to come to power). With leaders, their supporters too come to our party," he said.

However, barring former state cabinet ministers Suvendu Adhikari and Rajib Banerjee and Rajya Sabha MP Dinesh Trivedi, none have resigned from their posts.

"Tickets are given on the basis of winnability. It is not necessary that all the elected representatives who have joined from other parties will get tickets," he said.

"People vote for the BJP because of our ideology and policies and not by looking at politicians joining us from other outfits.

"We won't judge anyone. Law will take its own course. In their previous party, there was a culture of corruption so they worked accordingly, but in the BJP, they have to work as per our principles," he said.

Ghosh dismissed allegations that identity politics has risen in West Bengal simultaneously with the BJP's growth and blamed the TMC's 'appeasement politics' for the rise of communal politics in the state.

"Development for all is our election plank. But communal politics has grown in the state due to the TMC's appeasement politics. The TMC is solely responsible for this," he said.

He dismissed media reports that newly inducted actor Mithun Chakraborty might be projected as the party's chief ministerial candidate in the state.

Asked whether he will take up the challenge if the party anoints him as the CM face, Ghosh said he is a loyal soldier of the BJP and has always taken up the responsibilities bestowed upon him.

"Whatever responsibility the party bestows upon me, I will perform my duty diligently," he said.

On the 'outsider versus insider' debate in West Bengal, the state BJP chief said that the TMC has raked up the issue as it has nothing else to talk about.

"The TMC, after remaining in power in the state for a decade, has nothing else to talk about, it seems. Ours is a national party, and our leaders will come here to assist us. But those fighting the elections and the ground workers are from this state. So, the TMC's allegations are baseless," he added. 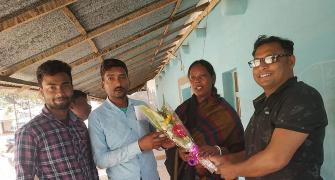 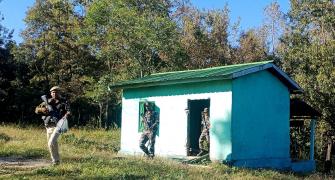