News
Business
Movies
Sports
Cricket
Get Ahead
Money Tips
Shopping
Sign in  |  Create a Rediffmail account
Rediff.com  » News » Why Sarala Murmu went to BJP after getting a TMC ticket

Why Sarala Murmu went to BJP after getting a TMC ticket

'I did get a ticket, but getting nominated isn't enough.'
'The people in Habibpur, my own party workers, are my opponents.'
'Is it possible to win?' 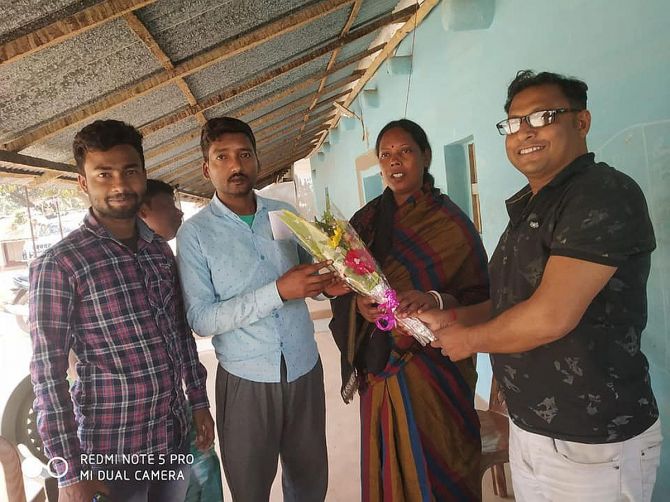 IMAGE: Sarala Murmu being felicitated after being allotted a Trinamool Congress ticket to contest the Habibpur seat on March 6. Two days later, on March 8, Murmu quit the TMC and joined the Bharatiya Janata Party. Photograph: @HabibpurerGorboMamata/Facebook

The whitewashed walls in Habibpur, a small town in Malda district of West Bengal are election-ready with the Trinamool Congress's 'Jora Ghas phool' (the twin leaf and flower) symbol and the candidate's name -- Sarala Murmu.

'Ei chinhe vote din, vote for this symbol,' the graffiti read after Mamata Banerjee announced her candidate list for the West Bengal polls on Friday, March 5.

On Monday, March 8, three days on, Murmu's name is being wiped out with a fresh coat of whitewash. In its place will be Pradeep Baskey's name, the TMC's new candidate from Habibpur; Murmu, the party announced, was unwell.

The same day, incidentally, celebrated internationally as Women's Day, Murmu and five sitting TMC MLAs, who were not given tickets this time, joined the Bharatiya Janata Party at the BJP's Kolkata office at Hastings.

Murmu is the only candidate who is not a sitting MLA.

Murmu is also the only candidate, say political observers, who quit a party because she wasn't given the seat of her choice.

Speaking to Swarupa Dutt/Rediff.com, Murmu is testy. "Watch the Bengali channel I spoke to and copy that, don't ask me these questions. Barebare aki kotha ki bolte hobe? Do I have to say the same things over and over again?"

A heartbeat later, she is more conciliatory. "I have not placed any demands before the BJP. I was unhappy with the TMC, I could not work there, so I quit. Joining the BJP was unconditional. They have accepted me and I am happy. That's all there is to it.

Since Suvendu Adhikari's defection to the BJP, Mamata Banerjee has lost several sitting MPs, MLAs, MLCs, zilla parishad members. Almost all choose the BJP. At a rally in Howrah on January 25, Mamata had told fence-sitters, 'Those who want to go (to the BJP), go quickly, the train will leave.'

The TMC has not handed out tickets to 64 sitting MLAs, including five ministers. Some of them have already expressed their resentment and said they will join the BJP.

Murmu says she had told the party she was displeased with being nominated from Habibpur, and wanted Malda (Old) instead, which is believed to be an easier seat.

"Yes, I did get a ticket, but getting nominated isn't enough. The people in Habibpur, my own party workers are my opponents. Is it possible to win?

"Mamata Banerjee nominates people without knowing how things work at the grassroots. Calling the party Trinamool (grassroots) is not enough, she should find out what is going wrong at the grassroots. Here in Malda, everyone thinks they are a neta. Proteyekei neta. They don't listen to the CM. How will things work?"

On Monday, 23 of the 37-member Malda zilla parishad led by Sabhadhipati Gour Chandra Mondal also joined the BJP. On the dais at the party office, Adhikari said the BJP now has a majority in the Malda district council.

Murmu says this is only the beginning. "Everyone who wanted to work for the party (TMC), found it impossible because you need your own party to work with you. Over there (in Malda), there is anarchy. You have two opponents -- one from another party, and the other from your own party. And they both want you to lose. Is it then the wrong decision to move? There will be more defections, mark my words."

She dismisses reports saying Suvendu Adhikari (the BJP's Nandigram candidate against Mamata Banerjee) had reached out to her and other defectors from the Malda ZP. "Neither did he call me, nor did I get in touch."

"Those of us who were unhappy with the way the party had been functioning in Malda, with party elders who want us to lose, decided it was time to leave. There was no point staying with the TMC."

Her defection, in a sense, was a matter of time. Adhikari has been focusing on Malda for a while now, since the district, with an over 50 per cent minority population, has always voted Trinamool.

"We have always been with dada (Adhikari). And since the time he joined the BJP, and with the TMC in disarray here, going with him was the natural thing to do."

Malda has 12 assembly seats and will go to the polls in phase seven (April 26) and eight (April 29).