Will Aditi Munshi hit the right notes for Mamata?

'People say my personality doesn't have sharp edges, but politics doesn't have to be about pulling down your opponents or bad mouthing them.' 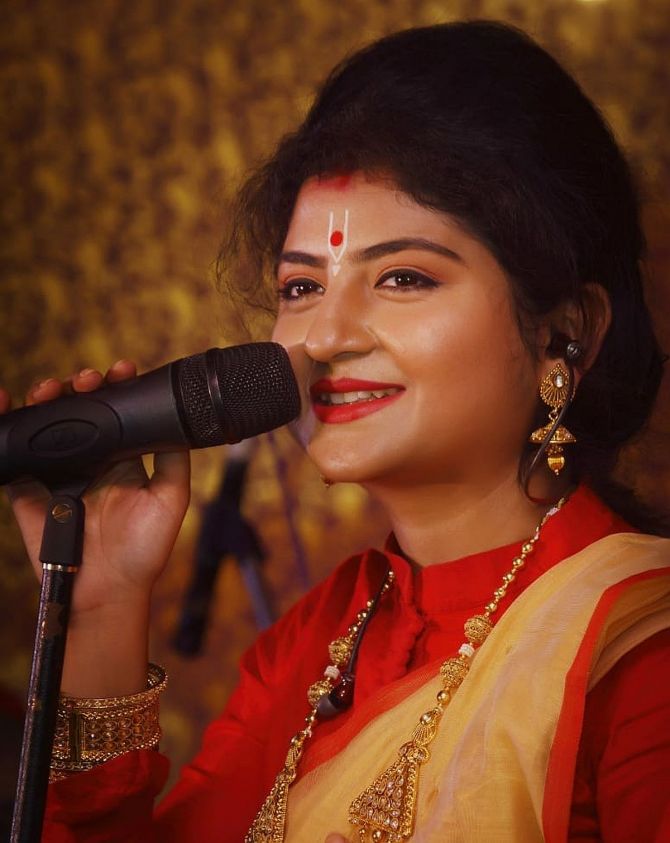 IMAGE: Aditi Munshi joined the Trinamool Congress on March 5 and soon it was announced that the popular singer would be the party's candidate from the Rajarhat Gopalpur Vidhan Sabha constituency. Photograph: Aditi Munshi/Facebook

Roop-e Lokkhi, gun-e Saraswati. As beautiful as the goddess Lakshmi, as talented as goddess Saraswati.

Aditi Munshi got that all the time when she debuted on the Bengali Zee Sa Re Ga Ma Pa talent show in 2015.

Her genre of music -- kirtan -- going back to the ascetic Chaitanya Mahaprabhu from the 15th century, was mostly unfamiliar to the city-bred momo-chomping Bengali who favoured 'deejay nights' at weddings and dancing to Jeet Ganguly's compositions.

As a contestant, Aditi was almost stuck in a time warp, not just in the way she dressed -- always in a sari with a sandalwood tika on her forehead like Bengali Vaishnav ascetics -- but also in her tone, tonality and language.

Soft-spoken, shy, deferential, viewers who couldn't get enough of Aditi, said she transported them to the Bengal of a bygone era, missed for its glorious tradition of music, arts, literature, and yes, deportment.

She didn't win, but what she did do, was of far greater consequence. She popularised and mainstreamed kirtan sangeet.

As legions of Bengali film and TV stars troop into the Bharatiya Janata Party, Aditi is the Trinamool Congress candidate from the Rajarhat Gopalpur Vidhan Sabha constituency and the party obviously hopes her immense popularity, the adulation she commands, will translate into votes.

"My identity as a singer, and that of a politician are different. As a singer, I have received incredible love from people. They know I have integrity and have never strayed from the correct path. My art is honest and true they know I will work with the same manner in politics. I believe, you can never go wrong if you do that," she tells Swarupa Dutt/Rediff.com.

Aditi was inducted into the party by TMC MP Saugata Roy, known to be a man of few words and taciturn to boot. He remained true to character except for a hint of a smile.

A week later, she was nominated.

"He (Roy) said he loves my songs. You know, I never expected that the party would have so much faith in me."

She says she would watch the news and realised Mamata Banerjee had been putting in a lot of work for the betterment of the state. "I'm fortunate enough to be chosen to be able to further her work. I want to work for our people and I'm grateful to be given this opportunity. I won't let her or my people down. This is the only party where I can be myself and do good work."

Aditi's husband Debraj Chakraborty, the North 24 Parganas Trinamool Youth Congress president, gained some infamy for threatening unnamed 'mastans' goons allegedly from the Bharatiya Janata Party during a meeting in October 2020 where he said they were alive because Mamata Banerjee allowed it.

In fact, Chakraborty had defected to the Congress in 2015 and won the Bidhannagar civic elections, which he couldn't celebrate since he was in jail on a case filed by the TMC for inciting violence during the polls. He moved to the TMC thereafter.

Aditi is not tainted, and possibly the reason the party favoured her with a ticket instead of her husband.

"It was Didi's decision. When we were in college, we would unquestioningly follow the instructions of our principal. Did we question his decision to hand out responsibility to a particular student? Ditto with our parents, and so it is with Mamata Banerjee. It's our duty to follow what they tell us and not ask questions."

She concedes she will need help and has reached out to senior leaders of the party. She will begin canvassing in her constituency, informing people about the various schemes of the government and if there are those who have fallen through the cracks, ensure they become beneficiaries.

Mamata's poll cry, Banglar Nijer Miye, Bengal's Own Daughter, is apt for Aditi. "Amar jonmo kormo shob ekhan theke. I was born and brought up in this place (her constituency); I know every bylane, these are my people and I am their daughter."

She says she is excited, but not worried about the new chapter in her life and has already figured out how to fit it in a schedule which begins with riyaz at 6 am, and alternates between house work and music and riyaz through the day. She teaches music twice a week and frequently goes to the recording studio for programmes.

"Gaan shona aar riyaz er moddheyi shomoi kete jay. I think the day goes by doing riyaz and listening to music. Now, my mornings will begin with my constituency, the rest of the day is for music. It's my oxygen, I can't live without it. It energises me. I won't be able to do justice to politics without music."

One of the judges during Zee Sa Re Ga Ma Pa had told her that the passion, devotion and fervour with which she sings abruptly ends when she speaks.

It couldn't be more true. Her voice is mellifluous, but the cadence flat.

How will she hold rallies, harangue her opponents, in the manner of most politicians?

"I know people say my personality doesn't have sharp edges, but politics doesn't have to be about pulling down your opponents or bad mouthing them. All of us, I think, at some point want to help out fellow human beings. I have been given an opportunity to do that," she says.

"I will work with honesty and diligence, shototar shote, and I can tell you without hesitation that I am confident I will be able to assume the responsibilities of my new role."

Throughout this interview, Aditi has used just two English words -- "fortunate" and "problem’, said to express her happiness at being nominated and the fact that she doesn’t believe anything is a hurdle.

Her Bengali vocabulary is rich, she is never at a loss for words and emphasises several times, her deep love for Bangaliaana (all that encompasses Bengali culture).

"Yes, I am traditional," she says and you can hear her smile. Her thinking, her speech, her clothes, her attitude, all of it, she points out is a departure from all that is considered modern.

She says she is not apologetic, she enjoys being traditional since that's the way she has been brought up in a joint family encompassing grandparents, several uncles and cousins.

"There is honestly nothing modern about me. Ami paari na. Shobai shob kichu toh parena. I can't do it (be modern, everyone can't do everything, can they). I don't like stepping out of my cultural and traditional mores. I am happy like this."

She sidesteps Mamata Banerjee's favourite argument to induce people to vote TMC -- that the party and its people are insiders.

"What I can tell you is that Didi has done a marvellous job of upholding Bengali culture. She has given importance to art and artistes, it would not be possible without her because she only she, understands and embraces, the true meaning of Bangaliaana," she says.

"Being Bengali and all that it represents is her identity, it's my identity. And I have found true happiness in my Bengali roots, in its culture and I hope I can further that in my music and my work as a politician."

Aditi Munshi could be the answer for people in Bengal yearning for nostalgia. 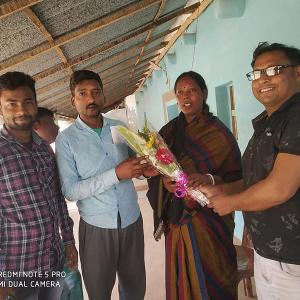