'Whether the Hindu voter will vote for us or not, we can't say, can we?' 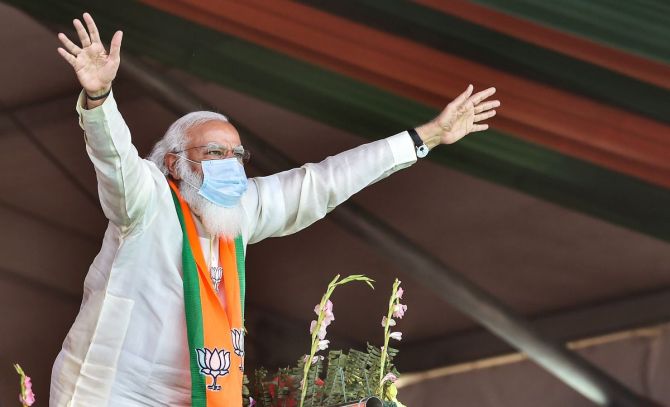 In the first part of an interview, the Roy brothers -- Tathagata and Saugata -- who are on the opposite sides of the political spectrum, spoke about the Bharatiya Janata Party and the Trinamool Congress's chances in the eight-phase West Bengal assembly election.

The brothers continue to answer questions on the Bengal elections, in the concluding segment of a fascinating interview to Rediff.com's Swarupa Dutt.

Is this insider-outsider rhetoric of Mamata just bluster to hide that she fears the BJP will form the next government in West Bengal?

Saugata: Absolute hogwash. The BJP will find it difficult to reach three figures. The outsider-insider rhetoric is real.

Look at their campaigners, most of them are from outside Bengal. Within Bengal so far they have not been able to project a single face as compared to the very known face of Mamata.

They will hire guns from outside, Yogi from UP, some other person from somewhere else, but does it work? It won't.

Tathagata: We are an all-India party. Bengalis constitute 18 per cent of the total population of India. So in an all-India party don't you think a large number of people from outside the state will come and campaign?

No Bengali thinks we are the cultural custodians of India. We give credence to all cultures. If as an outsider to Bengal you think that's true, that's nice of you, but as a party, we look upon all cultures with equanimity.

The insider-outsider rhetoric is the height of hypocrisy. Prashant Kishor, Mamata's chief political advisor, is a Bihari.

And does Mamata's party function without Marwari money? In West Bengal? Is it believable? Her hypocrisy has been exposed.

Mamata brings Shah Rukh Khan here and does all kinds of nautanki with him. You think it escapes the attention of people?

The prime minister will hold 20 rallies in Bengal. The Opposition feels he is more party functionary, less statesman, especially during election times. Comment.

Saugata: It's up to him that he wants to lower himself to this level. He's like a hawker, canvassing in all railway stations. Let him. It won't make any difference.

Tathagata: The prime minister is a BJP party functionary. Are you under some kind of illusion that he is not a political person?

He belongs to the Bharatiya Janata Party. He was a functionary before he became the prime minister or chief minister and our Constitution is such that people who belong to political parties go to the highest office of the country.

I am a Bengali, I am an Indian, I am a Hindu, I am all. Similarly, Narendra Modi is the PM and he is also a BJP functionary. They are not mutually exclusive.

The key to winning the election lies in the 70 per cent Hindu voters. Do you believe that the Hindu voters will go with the BJP?

Saugata: We will dissuade people, I think that's good enough. The BJP has launched a campaign of misinformation but that is what we will never do.

But I don't think Modi will swing the Hindu votes to the BJP. Modi by now has become a known factor.

Tathagata: We are not banking on this 70 per cent. Whether the Hindu voter will vote for us or not, we can't say, can we?

Am I not telling you that we appeal to all sections of voters? Whether they will vote for us or not, is up to them.

Poriborton was Mamata Banerjee's rallying cry when she swept to power in 2011. The BJP has now hijacked it for 'Asal poriborton (Real Change)'. Comment.

Saugata: The BJP is banking on a slogan, which has no meaning. What kind of change can the BJP promise?

Tathagata: When Mamata Banerjee did the poriborton from the CPI-M to her party, we thought that the politics of the state is going to change.

But what we find is that she is following the CPI-M step for step. The CPI-M was allowing infiltration; Mamata Banerjee does too.

The CPI-M was appeasing one section of the population; Mamata is doing the same thing. The CPI-M politicised the administrative machinery; Mamata has done it too.

The police have been parcelled into the political machinery by the CPI-M, ditto Mamata.

We will change all this -- that is asol poriborton.

The TMC is upset because the party feels it gives the BJP an unfair advantage with the eight-phase polls. Constituencies the BJP is weak in will go to polls after the four states finish, which will allow the BJP to focus on, and leverage its electoral might in the state.

Saugata: Nothing will benefit the BJP, not the multiple phases, nothing. The people are with the TMC, not the BJP, in spite of the Election Commission's decision not to act on complaints by the party.

But it is unfair to the state. When there are so many phases, everything comes to a halt and there will be hardships for the people because life comes to a standstill.

Still, despite this, the BJP will not be able to take advantage.

Unfortunately, the media has believed what the BJP has been saying about West Bengal being lawless and the EC has taken note of it.

Amit Shah's claim of 200 seats will remain his dream.

Tathagata: This is an outlandish statement. First thing is that the phases are decided by the Election Commission and not by the BJP.

If as you say, the BJP will put all its might in the later phases, so be it. I don't think it's an unfair advantage to us.

If you think it benefits us unfairly, complain to the EC.

The TMC argument is without basis because the real reason for the EC's decision on an eight-phase poll is different -- the law and order situation in West Bengal.

It's horrible, simply horrible. 140 BJP functionaries have been killed. And each killing has passed muster by the TMC and the politicised police.

The TMC wants to intimidate people to vote for them like the CPI-M used to.

The reports have reached the EC and that is why there are eight phases.