The National Democratic Alliance, led by strong man Narendra Modi secured a whopping 352 of 542 seats, making it evident that his message of muscular nationalism, security and Hindu pride had worked wonders. After sealing its phenomenal electoral victory with a 300-plus win, the Bharatiya Janata Party on Friday began discussing the process of government formation while the Congress dealt with the fallout of defeat with a spate of resignations from its state leaders.

As the counting of votes for 542 Lok Sabha seats ended, the Narendra Modi-led party had 303 seats in its kitty, a super-sized victory that had its leaders excitedly looking forward to a second successive term in government.

With the BJP riding a Modi wave that took it past its 2014 tally of 282, the opposition was left way behind with the Congress winning only 52 seats, two less than it needs for a Leader of Opposition post in the lower house and marginally more than the 44 it got in the last general elections. 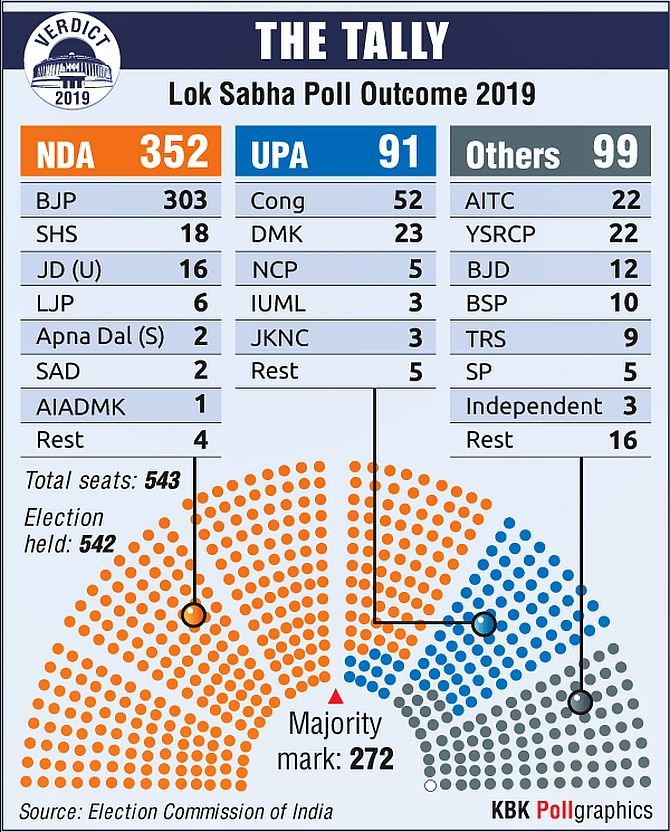 The party drew a blank in 18 states and union territories, including in Andhra Pradesh, Gujarat, Delhi and Haryana.

Regional parties followed the Congress in the electoral table.

The Dravida Munnetra Kazagham with 23 wins, the Trinamool Congress and the YSR Congress with 22 each, the Shiv Sena with 18 and the Janata Dal-United with 16 made their presence felt in an election that took on overtones of a presidential contest with the domination of Modi.

Other regional parties, particularly in Uttar Pradesh, did not fare well. The BJP and its ally Apna Dal-Sonelal won 64 of the 80 seats in the state, demolishing the challenge posed by the SP-BSP alliance.

Left parties CPI and CPI-M were left with five seats -- three for the CPI-M and two for the CPI. This is about half their tally of 10 in 2014.

"The results are depressing for the Uttar Pradesh Congress. I find myself guilty of not discharging my responsibility in a proper manner," Babbar, who lost by a margin of 4.95 lakh votes from Fatehpur Sikri, tweeted in Hindi.

With Gandhi losing in the family bastion of Amethi -- but winning handsomely from Wayanad -- district unit president Yogendra Misra also sent a letter resigning from the post.

"I have sent my resignation to Congress president (Rahul Gandhi) owning moral responsibility for the party's poor show in both Lok Sabha and Assembly polls in the state," added his Odisha colleague Patnaik. 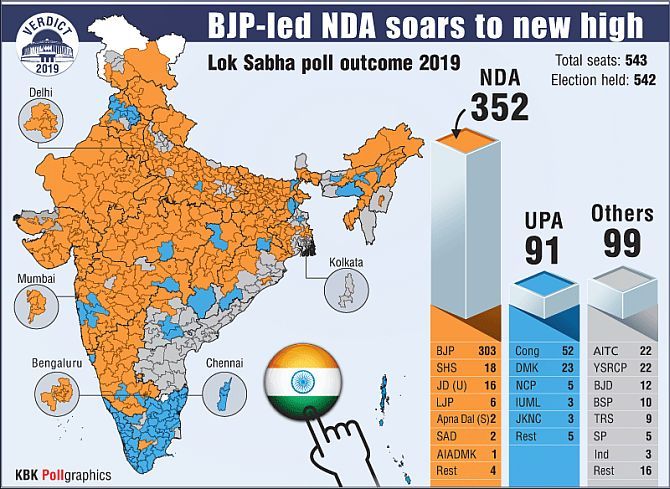 While Congress bagged only one Lok Sabha seat and nine assembly seats in Odisha, Patnaik also faced defeat in the assembly polls.

The BJP made huge strides in the coastal state, getting eight of 21 seats with the ruling BJD getting 12 and the Congress one. In 2014, the BJD got 20 and the BJP just one.

The saffron sweep was reported from other parts of the country as well with the BJP winning 61 of the 65 seats in the Hindi heartland states of Madhya Pradesh, Chhattisgarh and Rajasthan that the Congress won in assembly elections just five months ago.

A day after his win, a jubilant Modi visited party veterans Murli Manohar Joshi and L K Advani to seek their blessings.

"Called on respected Advani Ji. The BJP's successes today are possible because greats like him spent decades building the party and providing a fresh ideological narrative to the people," Modi tweeted. 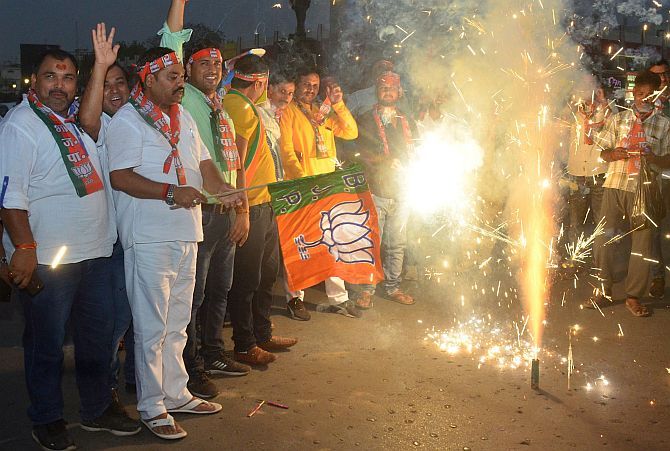 As his party readied another term, speculation mounted about portfolio distribution with many party leaders of the view that part president Amit Shah might be one of several new faces to be brought into the cabinet.

With the elections establishing 68-year-old Modi as the most popular leader in decades, the BJP and its allies in the National Democratic Alliance are poised to clinch around 350 seats as against their previous 336.

Former prime minister and Janata Dal-Secular supremo H D Deve Gowda also bit the dust when he lost the Tumkur seat in Karnataka where the BJP bagged 25 of the 28 seats.

After Jawaharlal Nehru and Indira Gandhi, Modi is the third prime minister of the country and the first non-Congress one who has been able to retain power for a second term with full majority.

The voting was staggered in seven phases between April 11 and May 19 in which around 67 per cent of the nearly 900 million eligible people exercised their franchise to elect 542 members of the Lok Sabha from a total of 8,049 contestants.

Counting was delayed because, for the first time in Lok Sabha polls, the EC tallied vote count on Electronic Voting Machines with voter verified paper audit trail slips in five polling stations in each assembly segment of a parliamentary constituency. 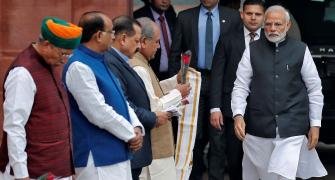 Verdict 2019: How did Modi's ministers fare 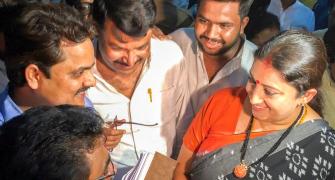