'In constituency after constituency, it was a vote for Modi, not the candidate,' says Saisuresh Sivaswamy. When Narendra Damodardas Modi takes oath as prime minister for the second time, he will have made history, of the kind that was denied to even Atal Bihari Vajpayee, considered the tallest non-Congress prime minister of India.

In 2004, Vajpayee, contrary to most expectations, lost his re-election bid. If he had won, he would have been the first non-Congress prime minister to be re-elected after completing a five-year term in office. It seemed then that the Opposition would never ever break that jinx.

Till a certain Narendra Damodardas Modi came on the scene.

His election in 2014 was itself nothing short of overcoming immense odds.

The media suspected him.

The Opposition scorned him.

Even within the BJP he faced strong opposition from the central leadership.

But in 2019 the challenges were different.

The Opposition was getting its act together.

Reversal in some key assembly elections showed that the BJP was vulnerable to bread and butter issues, and anti-incumbency could be a factor, it was felt.

But between December 2018, when not many even in the saffron fold gave the National Democratic Alliance much of a chance to come back to power, and April-May, when the 7-phase election meandered through India, Modi and his Man Friday Amit Anilchandra Shah have wrought the near-impossible.

And cemented Modi's place in history.

The story of how Modi won a re-election in the face of severe agrarian crisis, mounting unemployment, looming economic crisis, is the story of how the power of the message can be put to devastating effect in the hands of a strong leader.

If Modi's 2014 campaign was designed to catch the imagination of a public that barely knew him beyond Gujarat, this time round he eschewed repeating the same catchphrases and campaign style.

So we did not see any reference to Vikas or Sabka Saath, Sabka Vikas, phrases from five years earlier he knew had outlived their utility. Nor was there any tech blitzkrieg like holograms, or common man ideas like Chai ka Charcha.

A marketing whiz could not have drawn up a better campaign than what Modi-Shah came up with. In 2014 Modi was an unknown entity and needed the hardsell. In 2019 Modi had his prime ministerial record to fall back on.

Initiatives like demonetisation, or the hasty GST rollout may have invited derision from PLUs as hare-brained and ill-prepared, but then we all miss the point. These were not aimed at people like us, but the ordinary mass of voters who are willing to put their faith in Modi and buy the yojanas as a ticket for a better life.

But elections are not won on economics -- good, or bad -- but by leaders with a vision and promise.

Why the voter bought into Modi's vision and promise and not Rahul Gandhi's, who too in a total makeover presented himself as a decisive leader with a vision for the nation, is where brand equity comes in.

Not only did Modi's brand equity outstrip Rahul's by far, but the BJP also had a strong delivery mechanism that did a much superior job of reaching the brand to the corners where it mattered.

It's an axiom that no amount of marketing can sell a bad product; conversely, a good product by itself also cannot hope to succeed without a smart marketing strategy and execution. BJP President Amit Anilchandra Shah in fact summed it up best he said that in this election, Modi was contesting from every constituency. And the results bear him out.

But this election was not only about Modi Brand, it was equally about the Modi Messaging.

Even as the Opposition trained its guns on oft-repeated charges against Modi -- Rafale, crony capitalism, anti-minorityism, etc -- the prime minister was tweaking and finetuning his campaign through the election phases.

Thus, he swung through emotive issues like nationalism and the honour of defence forces, personal integrity and corruption, dynasty and democracy, even as the Opposition scrambled from one issue to the issue, always reacting to the agenda set by him and not being able to set the agenda themselves.

Issues that the Opposition sought to put him on the backfoot over -- be it Rafale or farm crisis -- were simply not joined.

Even in areas where the Opposition may have scored a lead over him, like in the case of media interactions, Modi quickly opened the door to journalists of all hues, even talking to them while on the campaign trail and answering seemingly non-vetted questions.

Overall, Modi pitched himself as a doer who needs another five years to finish the job that he had started.

Layering it all was the Hindutva line which, even if not made openly, is always an undercurrent in the BJP's campaign.

It could be snuck up on the traditional voter through comments about Wayanad's voter composition.

Or could be rammed home through the nomination of someone like Pragya Singh Thakur.

Or with the Jai Shri Ram greeting in Ayodhya.

Or even questioning why the Bengal government doesn't allow Saraswati Puja and Durga Puja.

If there is one learning from this election, it is that Hindutva doesn't always ride on the shoulders of gau rakshaks.

Brand association can also have a downside.

It is because of the BJP and Modi's strong identification with Hindutva that Tamil Nadu and Kerala have refused to let the party gain a foothold. Kerala has a strong Communist influence (never mind the LDF has fared badly in the state), while Tamil Nadu is steeped in Dravidian culture. Both societies thus have an innate aversion to overt religiosity, or even covert like the BJP's.

Till recently another state too fit into this category, but which now has opened up to the BJP in a big way.

West Bengal is another indication that with a persistent and aggressive campaign, even hitherto no-go areas can open up, so who knows how things will shape in the two southern states.

Which course is what the Modi-Shah combine must already be charting in what is their finest moment, when anyone else would pause to celebrate.

In the final analysis, it is this 24x7 politicking that is the diffentiator between the Bharatiya Janata Party leadership and the others.

They are unrelenting, untiring and, so far at least, unstoppable. 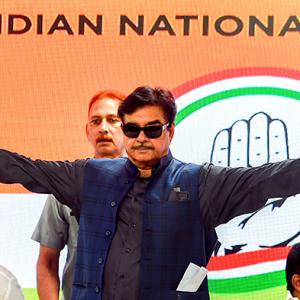