A token system for regulated entry and no physical offerings like 'prasad' will be some of the norms as shopping malls, religious places, hotels and restaurants are set to reopen in most states from Monday after over two months that could pose new challenges to check the spread of the coronavirus. 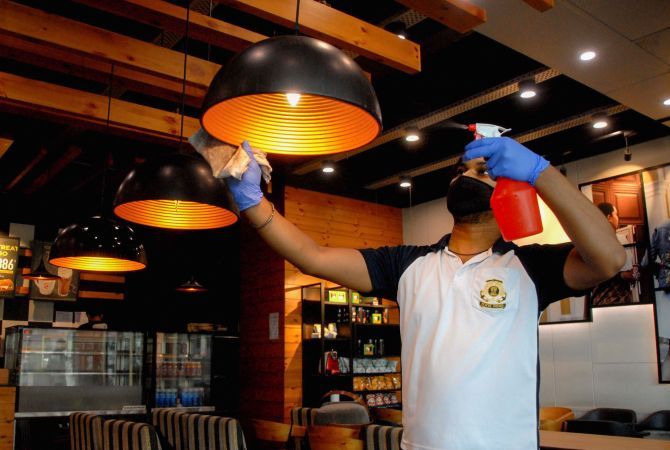 IMAGE: A worker sanitises Smart Bharat Mall ahead of its re-opening, in Noida, on Sunday. Photograph: PTI Photo

As India prepares for a calibrated exit from the lockdown by easing more restrictions, 'Unlock-1 -- the first of the three-phase plan for reopening of prohibited activities in non-containment zones with a stringent set of Standard Operating Procedures(SOPs) -- kicks in at a time when the country recorded a daily jump of COVID-19 cases by over 9,000 for the fifth straight day on Sunday.

The SOPs will be in place till June 30.

India registered its highest single-day spike of 9,971 new infections taking the total to 2,46,628 and 287 deaths in the 24 hours since Saturday morning, the Union health ministry said.

The number of active COVID-19 cases stands at 1,20,406 while a total of 1,19,292 people had recovered and one patient has migrated, the ministry added.

Around 48.37 per cent of the patients have recovered so far, a senior ministry official said.

The new phase is especially challenging for the five worst affected states, accounting for nearly 70 per cent of the total confirmed coronavirus cases, and nearly 78 per cent of the deaths.

There also has been an uptick in cases in states like West Bengal which recorded the highest single-day spike for the third day in a row with 449 cases taking the tally to 8,187.

Maharashtra, which reported 3,007 new cases, has now surpassed China which accounted for 83,036 COVID-19 infections to be in the 18th position in the global tally. 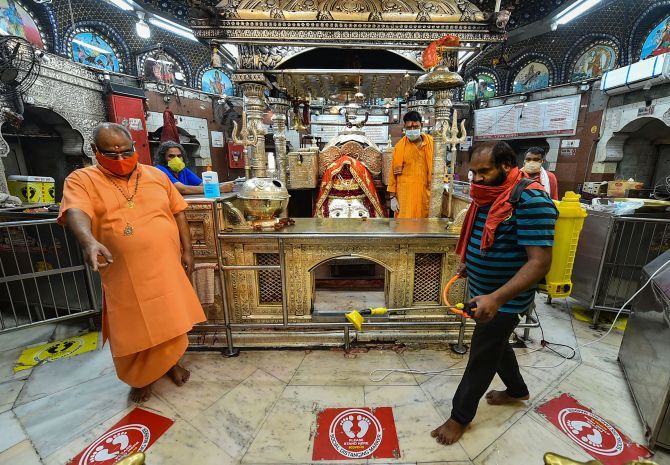 IMAGE: A worker sprays disinfectant inside Kalka Ji temple ahead of its re-opening for devotees, in New Delhi, on Sunday. Photograph: Arun Sharma/PTI Photo

However, there was some good news from Mumbai's Dharavi, believed to be Asia's largest slum and also a hotspot.

In signs that could point to the flattening of the coronavirus curve in Dharavi, a Brihanmumbai Municipal Corporation (BMC) official said it has not reported a single COVID-19 death in the last six days while 939 of the total 1,899 patients have recovered.

A visit to the shopping malls, hotels and restaurants and religious places will no longer be the same like before the lockdown imposed on March 25 after the Union health ministry issued the SOPs for strict adherence to contain the spread of COVID-19.

In the malls, cinema halls, gaming arcades and children play areas will continue to be in the prohibited segment.

The SOPs are advisory in nature and the Centre has left it to the states to finetune the details.

The Punjab government for example provides for a token-based entry to malls as part of its guidelines.

In Gujarat, some of the religious places have decided to organise prayers in shifts and even start a token system to specify time slots to devotees for visits in a bid to maintain social distancing and avoid crowding,

Delhi Chief Minister Arvind Kejriwal announced that the hospitals run by the Delhi government and private entities will only treat Delhiites during the coronavirus crisis while the city's borders will be reopened from Monday.

Addressing an online media briefing, Kejriwal said hospitals run by the Centre will have no such restriction, and if people from other states come to the national capital for specific surgeries, they can get medical treatment at private hospitals.

"We are going to reopen Delhi's borders tomorrow. Malls, restaurants and religious places will open but hotels and banquets will remain closed as we might need to convert them into hospitals in the coming time," Kejriwal said.

The Centre, meanwhile, defended the timing of the imposition of the lockdown and rejected as 'baseless' media reports expressing concern that it did not take inputs from technical experts while drawing up its COVID-19 strategy.

Asserting that coronavirus is a 'new agent' about which not everything is known, the health ministry also said it is 'fine-tuning' its strategy based on emerging knowledge and experience on the ground. 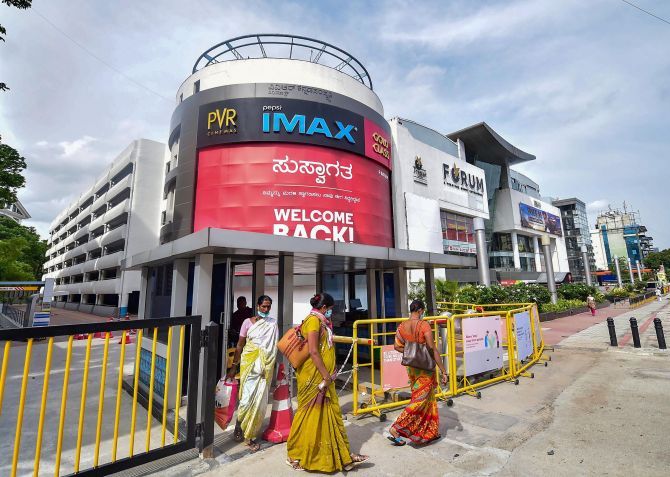 IMAGE: A view of a mall ahead of its reopening on Monday, in Bengaluru, on Sunday. Photograph: Shailendra Bhojak/PTI Photo

In a statement, the ministry said there was all round consensus on the lockdown among all the state governments.

The government has already shared the information on the impact of lockdown and other restrictions on averting lakhs of infections and thousands of deaths, it added.

"The doubling rate of cases had dropped to a low level, pointing toward a dangerous trajectory of high case load and high mortality, as experienced by many western countries. The possibility that our health systems could soon be overwhelmed with COVID-19 patients, seemed to be real."

The Union Culture Ministry also approved opening of 820 centrally protected monuments under the Archaeological Survey of India(ASI) which has places of worship from June 8, Minister Prahlad Patel said.

Malls in Delhi will be focussing on hourly disinfection of the common areas, contact-less shopping and physical distancing, according to some of the mall owners.There are around 100 big and small shopping malls in the national capital.

Several malls have set up ultraviolet(UV) sterilisation chambers for the patrons to disinfect their belongings.

"We have asked our staff to report an hour before the malls are opened for the public. After the mandatory screening, the employees will be given face-shields, gloves and sanitiser," said Harsh Vardhan Bansal, the director of Vegas Mall in Dwarka.

In line with the central guidelines, the Karnataka government has specified conditions such as social distancing, no distribution of 'teertha' (holy water) or 'prasada', no ringing of temple bells for devotees and a bar on special 'pooja' or 'archana'.

In Goa, churches and mosques in Goa have decided to remain closed for some more time.

The Maharashtra government is yet to take a decision on opening religious places for devotees in the state as part of lockdown relaxations, Maharashtra's law and judiciary department secretary Rajendra Bhagwat told PTI.

An archdiocese of Catholic Church in Kerala said churches under it would not conduct service like mass but they would be opened for the devotees to go and offer individual prayers.

The Shahi Imam of Delhi's Jama Masjid Syed Ahmed Bukhari said all the safety measures have been taken at the historic mosque that will reopen on Monday for prayers.

Bukhari said people have been advised to perform 'wuzu' (ablution) at home before coming to offer namaz.

People will bring their own mats and to maintain social distancing floor markings have been made so that there is adequate space between rows of people, he said.

The general SOPs issued by the Centre included measures like allowing only asymptomatic staff, guests, customers and devotees on the premises, proper crowd management and maintaining effective and frequent sanitation, with a particular focus on lavatories, drinking and hand washing stations/areas.

Hand hygiene (sanitiser dispenser) and thermal screening provisions should be in place mandatorily at the entrance and everyone should maintain respiratory etiquette and follow the prescribed 'do's and dont's', the health ministry stated.

The SOPs also recommended installation and use of the Aarogya Setu app.

For air-conditioning and ventilation, the ministry said the guidelines of the CPWD shall be followed which emphasises that the temperature setting of all air conditioning devices should be in the range of 24-30 degrees Celsius, relative humidity in the range of 40-70 per cent and intake of fresh air be allowed as much as possible besides adequate cross ventilation. 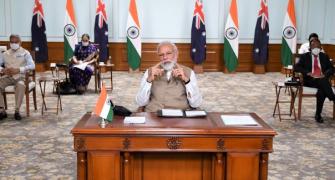 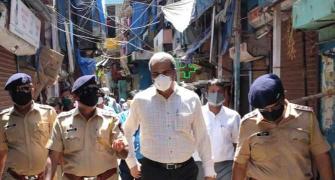 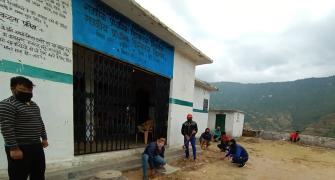 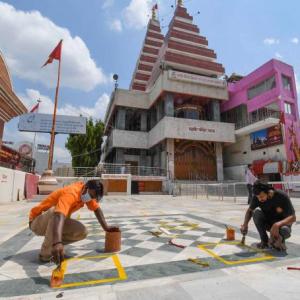 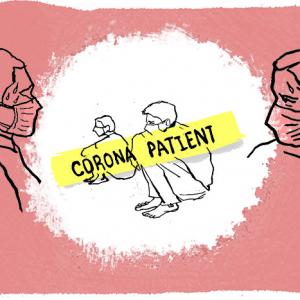