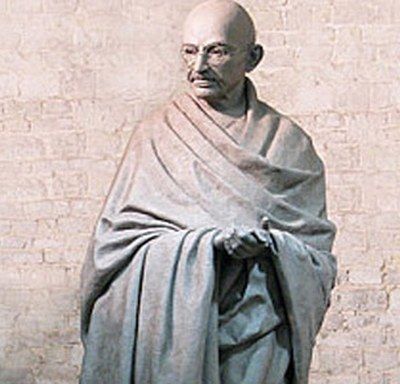 The announcement came as the Gandhi Statue Memorial Trust surpassed the 1-million pound mark in donations, with steel tycoon Lakshmi N Mittal adding 100,000 pounds and the Infosys Board chaired by K V Kamath 250,000 pounds in the last few weeks.

Finance Minister Arun Jaitley is expected to be the special guest at the ceremony to install the statue which will be the last one to up in the square alongside South African anti-apartheid leader Nelson Mandela and Britain's war-time Prime Minister Winston Churchill.

"The statue in Parliament Square not only marks his huge importance in the history of both our countries, but will enrich the firm bond of friendship between the world’s oldest democracy and it’s largest," Cameron said in a statement.

"Mahatma Gandhi is an inspiration. His approach of non-violence will resonate forever as a positive legacy -- not just for the UK and India, but the world over. He was a man of great insight and many of his observations remain as fresh and relevant today as when he first made them -- that we should be the change we wish to see in the world is timeless advice, well worth following," he said.

Elaborating on the close India-UK ties, the British PM said the relationship ‘continued to go from strength to strength -- through mutual respect as equals, through cooperation, trade, and of course through the one-and-a-half million Indian diaspora living in Britain today who bring our two nations closer, to the benefit of both’.

The bronze statue by leading British sculptor Philip Jackson will be the focal point for the commemoration of the 100th anniversary of Gandhi's return to India from South Africa to kick-start India's independence movement.

The sculpture will portray the Father of the Indian Nation draped in a shawl based on pictures from his last visit to the UK in 1931.

"It is great that there will be a monument honouring Gandhi in London's Parliament Square, which was one of his favourite cities. He is the first Indian and the only person

honoured with a statue in the Square who never held public office," said economist Lord Meghnad Desai, the founder-chair of the Gandhi Statue Memorial Trust.

"Generous donors have contributed sums from a pound up to hundreds of thousands of pounds from UK, India and around the world. On behalf of the Gandhi Statue Memorial Trust we thank all who made it possible for us to exceed our target of a million pounds within six months. As Gandhi said 'If the cause is right the means will come'," he said.

The project was announced in July last year during a visit by UK chancellor George Osborne and then foreign secretary William Hague to India.

UK culture secretary Sajid Javid, who chairs the Gandhi Statue Special Advisory Board, said, "Gandhi is one of the most inspirational figures in history and the statute will be a fitting symbol to his teachings of non-violent, peaceful protests. It also highlights the strength of the relationship and friendship that Britain has with India today.

"I would like to thank Lord Desai and the work of the Gandhi Statue Memorial Trust for raising the funds to make this happen. It is right that Gandhi's teachings and work are not forgotten and the statue will keep his legacy alive and inspire many young people to learn his incredible story."

Priti Patel, exchequer secretary to the Treasury and UK Indian Diaspora Champion, said, "The statue of Gandhi will be an incredible symbol of democracy and celebrate the life of a man of true greatness.

"His story and work is one that the whole of humanity can learn from and be inspired by but it, of course, also has a special resonance with the Indian Diaspora community living in Britain today. The statue will be a lasting tribute to our strong ties with India."