The Congress and the Bharatiya Janata Party engaged in a war of words on Wednesday over defence minister Rajnath Singh visiting France to receive the first Rafale fighter jet and performing shastra puja, in which weapons are worshipped on Dussehra, on the aircraft, with opposition party leaders slamming it as "drama" and the saffron party hitting back with a 'Bofors' barb. 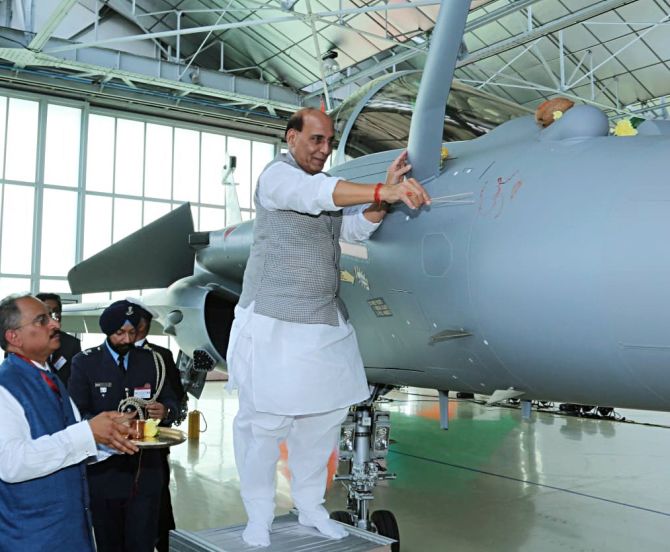 At a ceremony in Merignac (France) on Tuesday, Singh formally took delivery of the first of the 36 long-awaited French-made aircraft acquired by the Indian Air Force.

He performed puja on the new aircraft as he emblazoned it with an 'Om' tilak and laid flowers and a coconut, just before he took a sortie in the two-seater jet.

The Opposition party accused the BJP of politicising a defence acquisition.

Reacting to the development, Congress leader Rashid Alvi said, "This is a government of dramatics. You are going to France and performing puja, wasn't the Rafale jet coming to India? You are going to a foreign country and doing all this drama."

After his reported comments terming Singh's shastra puja as tamasha (theatrics) drew sharp responses, Congress leader Mallikarjuna Kharge said he was not referring to the puja but was questioning as to why politicians were getting involved in Rafale delivery and other technical matters.

"I only said that in Rafale and other technical matters, it is the Air Force and Army that deal with it and why are politicians getting involved," he said.

Kharge said he was not criticising shastra puja, and his point was that the aircraft will still take at least 6-8 months to come to India and therefore "why should they do this (puja) there, they can do it when it comes here".

The BJP led by its chief Amit Shah, however, cited Kharge's reported remarks to launch a scathing attack on the Congress, saying those who "used to worship Quattrocchi, Shastra Puja is now a problem" for them.

Taking on the Congress over the issue, Shah in an election rally in Kaithal in Haryana said it has been a tradition to worship weapons on the occasion of Vijay Dashmi.

"We worship weapons on Vijaydashmi to take a pledge to end evil, and same was done in case of Rafale, but for the Congress it is 'tamasha'. After repeated defeats, the Congress is frustrated and doesn't know what it is opposing," he said.

The BJP, in a tweet, said that the opposition party has problems with modernisation of Air Force and even Indian customs and traditions.

"For a party used to worshipping Quattrocchi, Shastra Puja is naturally a problem," the ruling party said taking a dig at the Congress over the Bofors deal made by the government headed by former Prime Minister and its president Sonia Gandhi's husband Rajiv Gandhi.

Kharge's reported 'tamasha remarks also came in for criticism from disgruntled Congress leader Sanjay Nirupam who said shastra puja cannot be called a "tamasha" as it is a thousands of years old tradition of this country.

"I know Mallikarjuna Kharge ji is an atheist. He doesn't believe in praying, we know, but not everyone in the Congress like him is an atheist," he said.

"In the entire country, one per cent people are atheists but all the others believe in praying and therefore those who are atheist should not impose their beliefs on the party and society," Nirupam said.

He asserted that he was supporting Shastra Puja and not the BJP as in his opinion Indian traditions and cultural heritage are "far bigger than any party or individual".

"The Rafale jet belongs to France. It was protected by lemon-coconut while being made part of the Air Force. What would the world be thinking? Due to this superstition, such fighter aircraft have to be bought from outside. The day this superstition ends, we will make the jet ourselves," he said.

Congress spokesperson Sandeep Dikshit said the problem is with the "politicisation" of the event by the defence minister and the BJP.

He said there was no problem with performing of rituals, but it is the manner in which the event was politicised with the defence minister for the first time receiving armaments himself instead of the defence forces. "That is the issue," he said.

Union minister and senior BJP leader Prakash Javadekar said the country has a tradition of Shastra Puja on Vijay Dashmi and there is nothing wrong in it, adding "the Congress has lost its way".

Echoing similar sentiments, BJP's spokesperson Shahnawaz Hussain said it was Indian Air Force Day and also Vijayadashami when a Rafale jet was handed over. Worshipping weapons on Vijayadashami is a tradition.

"If India is getting advanced aircraft like Rafale, Pakistan should be worried, why is the Congress so worried," he questioned.

At an AICC briefing, Congress spokesperson Pawan Khera said the issue around Rafale is not that of the capability of the aircraft, but that of the delay caused by the BJP government in procuring them after cancelling the original UPA deal.

He said Congress leaders have not criticised the Rafale aircraft, but have sought answers on why this government caused delay in producing the aircraft.

"Our leaders have not criticised. I heard them. They have only questioned on the issue of delay. Something which was decided by the UPA, would have been part of our fleet much earlier.You derailed that," he said. 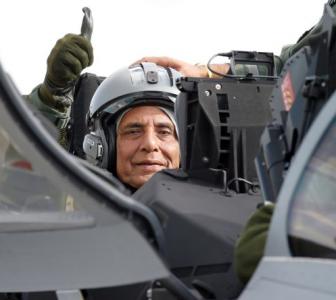 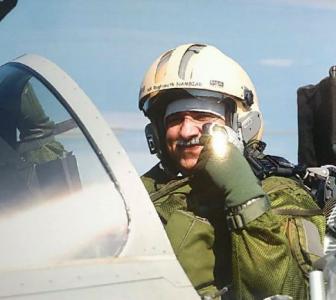 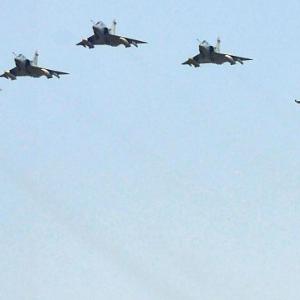 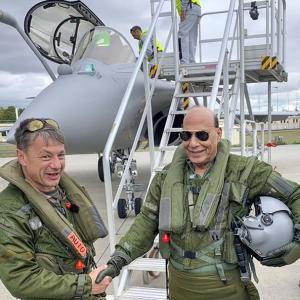