Stand vindicated, moment of fulfilment for me: Advani 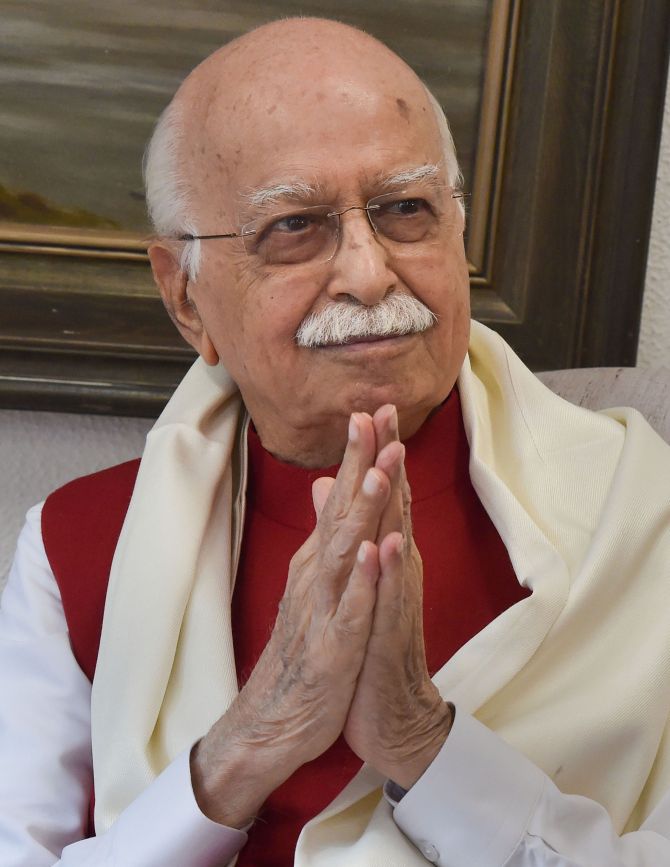 Bharatiya Janata Party veteran L K Advani, the most prominent political face of the Ram Janmabhoomi movement, on Saturday said the historic Supreme Court judgment on the Ayodhya issue has vindicated his stand and he feels deeply blessed over the verdict paving the way for construction of a magnificent Ram temple.

Describing it as a moment of 'fulfilment' for him, Advani, who celebrated his 92nd birthday on Friday, said 'God Almighty' had given him an opportunity to make his own humble contribution to the mass movement and stressed that time has come to leave all contention and acrimony behind and embrace communal concord and peace.

Terming the agitation for Ram temple the biggest since India's freedom movement, he said it was aimed at the outcome which the verdict has made possible.

'I stand vindicated, and feel deeply blessed, that the Supreme Court has given its unanimous verdict paving the way for the construction of a magnificent temple for Lord Ram at Ramjanmabhhomi in Ayodhya,' he said in a statement, while 'wholeheartedly' welcoming the judgment.

Stressing that Ram and Ramayana occupy an esteemed place in India's cultural and civilisational heritage and Ram Janmabhoomi (birthplace) holds a special and sacred place in the hearts of crores of countrymen, he said it is gratifying that their belief and sentiments have been respected.

Underlining that the judgment is the culmination of a long and contentious process over the last many decades, Advani, who has been the BJP's longest serving president, said, 'Now that the prolonged Mandir-Masjid dispute in Ayodhya has come to an end, the time has come to leave all contention and acrimony behind and embrace communal concord and peace.'

He appealed to all sections of India's diverse society to work together to strengthen the country's national unity and integrity.

Advani also welcomed the apex court's decision that five acres of land be given at a prominent place for building a mosque in Ayodhya.

'I join all my countrymen in wholeheartedly welcoming the historic judgment delivered by the five-member Constitution Bench of the Supreme Court today in the Ayodhya matter,'Advani said.

Advani launched his famous 'Rath Yatra' from Somnath temple in Gujarat, drawing people in their thousands as his chariot rolled through the country's heartland rallying support for building Ram temple at the disputed site in Ayodhya.