'Muslims should not justify demolition of temples by foreign invaders.' 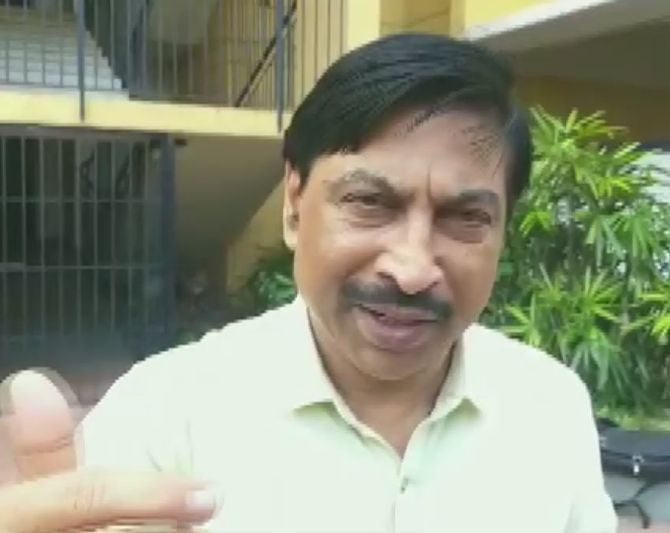 As a young archaeologist, K K Muhammed, then in his 20s, had gone on excavation work at the Babri Masjid site in Ayodhya in 1976 under the team led by senior archaeologist Dr B B Lal.

"On the western side of the Babri Masjid during our excavation, we found remains of a temple," recalls Muhammed, now 66 years old

Unfortunately, no one believed Muhammed then and his report was rejected.

After 43 years, the Supreme Court on November 9, 2019, stated in its verdict that remains of pre-Islamic past were found at the site of the Babri Masjid and the disputed site was given to Hindus to build the Ram temple.

Muhammed, who says he feels vindicated after the Supreme Court verdict, spoke to Rediff.com's Syed Firdaus Ashraf soon after. "Muslims lost a golden opportunity to turn over a new leaf in life if they had given up the Babri Masjid claim," he says.

Your first reaction to the judgment.

Looking back, were you shocked to see the remains of a temple at the Babri Masjid site?

As an archaeologist we have seen these things and so it was shocking to see it at the Babri Masjid site.

Why were your findings not believed when you said temples were underneath the Babri Masjid?

It was because of Left historians like Irfan Habib. There was a whole group of Left historians who were very powerful in the Indian Council of Historical Research and leading newspapers were in their hands. Therefore, no one believed me then.

The Supreme Court did not say clearly that there was a temple but only said some pre-Islamic structure existed there.

That is euphemism for temple because the Supreme Court wanted to solve the problem. It was like a practical approach. You have temple pranala (discharge outlet), abhishek jal and there was magar (crocodile) pranala at the Babri Masjid site. And this magar pranala, you will not see in a mosque area.

You then had an amalka (an architectural feature) which is below the kalash of a temple. All these are properties of a temple.

You had 253 terracota human beings, animals and cobra which are not seen in a Muslim area (mosque).

So the Supreme Court used an euphemism and the verdict was beautifully drafted.

How does it feel to be vindicated after 43 years as you have been saying all along that a temple existed at the Babri Masjid site?

It was a long struggle. One day you have to die and it is good to die for a noble cause.

You must have led a life of a loner after your viewpoint as a professional was rejected.

I worked in other areas of the Chambal valley and also in Maoist areas so I got the energy to forget all those things. These leftist historians demoted me and I lost many opportunities, but I would not say this was a loss as I gained more and became more powerful.

So you get many opportunities.

As a Muslim yourself, when you said a mandir existed below the Babri Masjid, what was the reaction of your community?

Naturally they were against me, but there were a number of Muslims who came out openly in support of me. In Lucknow, too, many Muslims came out in my support.

Even till the day the Supreme Court judgment came the All Indian Muslim Personal Law Board and Sunni Waqf Board were not willing to give up their claim.

They didn't have the foresight which they should have had.

Richard M Eaton, the historian, estimated the number of temples destroyed by Muslim rulers to be 80 and says in this the Ram temple of Ayodhya was not mentioned.

If you go through a book called Maasiri-i-Alamgiri written by Saqi Mustad Khan during the time of Aurangzeb, you fill find out in that it is written that in one stroke 175 temples on the way to Rajasthan were destroyed when Aurangzeb reached there. And I am only talking of Aurangzeb's period.

People who had come from Ghazni, they did not represent the right Islam. They were Afghanis. Why should Indian Muslims be bothered about those people who were anti-Islam?

Muslims should not justify demolition of temples by foreign invaders.

As far as evidence is concerned, there is scientific evidence that a temple existed at the spot of the Babri Masjid.

I was the first Muslim archaeological officer who said in the 1976 excavation that there existed a temple at the Babri Masjid spot.

In 2003, another excavation took place and there were four other Muslim archaeological officers who too agreed that there existed a temple at the Babri Masjid spot.

Ghulam Syed Khwaja from Nagpur, Atiqurehman Siddiqui from Lucknow, A Hashmi who retired from Bhopal, and Zulfiqar Ali from Chandigarh -- they also co-authored the report on this issue.