'Lord Ram's history has reached Indonesia, but not Owaisi's home.' 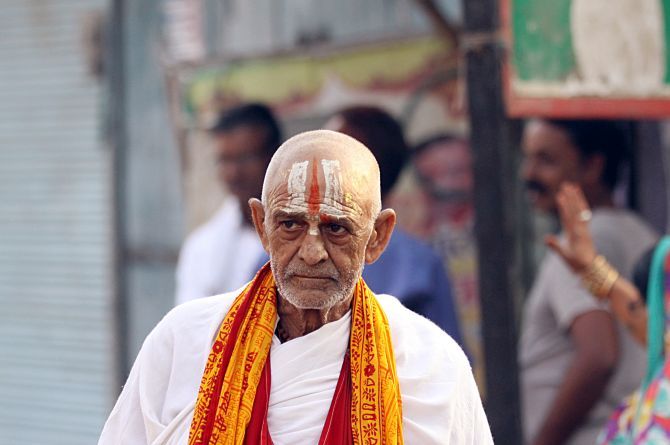 Your reaction to the Supreme Court's Ayodhya judgment?

There was a false campaign going on by pseudo-secularists and that has been defeated.

The Supreme Court has endorsed that even the question of legacy is based on historical facts.

This verdict has taken each and every aspect and given an opportunity to both parties to present their facts and logic. And on the basis of that this verdict has been delivered.

This verdict has been largely accepted by the people of India except a few aberrations which includes Asaduddin Owaisi. He is an aberration in Indian politics.

I don't know what his concept of Hindu rashtra is. Reconstruction of the Ram temple is a matter of faith. It has nothing to do with the Constitution of India or changing the nature of the Indian State.

It has in fact transformed the nature of discourse in the country.

This nature of discourse was imposed by pseudo-secular forces creating a binary between Hindus and Muslims.

As Mohan Bhagwatji and Prime Minister Modiji both categorically said, this verdict should be utilised to create more integration and fraternity and start a new chapter in India's history rather than reviving the old politics of communal discourse.

But from this judgment one gets the feeling that the Bharatiya Janata Party activists's demolition of the mosque on December 6, 1992 has been legally justified as the Ram temple will be built at the same spot.

This is a part of history. In the process of a long movement many things have taken place.

The core of the issue is whether a Ram temple existed or not and the Supreme Court has taken into consideration India as a civilisational nation-State. That is why it took evidences produced by the ASI (Archaeological Survey Of India), evidences which go back 600, 700 years.

Therefore the Supreme Court verdict is an endorsement that India may have been freed in 1947 from the British yoke, but it is an old nation. And evidence of pre-1947 is valid to decide the issue of culture and society.

The Supreme Court never said that what was buried under the Babri masjid was a Ram temple. It only said it was pre-Islamic.

This evidence is 600 years old and at that time science and technology were not so advanced. These evidences categorically say they were not part of a mosque but part of a Hindu structure.

There is a feeling that the Supreme Court, which was the Muslims's last hope, did not do justice to them as after demolishing the mosque Hindus have got a temple in its place.

Why should Muslims adopt Babur as their ancestor? Indian Muslims have their own legacy and have co-shared it with Hindus. We have lived together for centuries and certain aberrations have taken place and we are rejecting those aberrations.

99.9 per cent Muslims are indigenous and they are not foreigners. So why should you reject pre-Islamic legacy? This does not create a healthy socio-culture atmosphere.

You are talking like V S Naipaul who wrote that Muslims reject their past heritage after converting to Islam and that creates tremendous disturbance in societies.

The Indian situation cannot be compared to any part of the globe. We have seen that a microscopic number of Parsis came to India and have flourished. Today they have reduced in number because of their own genetic factors and not due to majoritarianism.

In the same way Jews in India want to live in India and not Israel. They refuse to go there as they enjoy all liberties here.

In the same way Indian Muslims are the second majority in this country. They have a significant role to play. And they have played a significant role at every juncture and that is being accepted. Only a few people are trying to appropriate Islamic politics for their own politics.

Bhagwan Ram belongs to all Indians. You accept him as God, ideal person or as Maryada Purshottam.

But is it not cultural imposition of Lord Ram on other faiths?

Nobody is telling you to worship Lord Ram. Foreigners came and they destroyed the temple. Whatever the religion of the foreigner (Babur), he was an aggressor out to destroy the cultural heritage and cultural identity and this is unacceptable.

If Babur had constructed a great mosque nobody would have objected. But he destroyed a temple. This verdict is based on facts and not on faith. Every party was given all the opportunity to present the facts. The Mughal revenue report, British gazette report and ASI report say there was a temple.

The Supreme Court did criticise your party by stating the demolition of the Babri Masjid was wrong.

Owaisi is only saying the Supreme Court is not infallible -- and quotes former Chief Justice J S Verma as saying so.

You cannot disconnect with your cultural roots. He is doing narrow politics.

But he is also urging everyone to maintain peace.

By sowing poison he is talking of peace. If a snake bites you, he cannot wish you to survive. His body language and temperament, everything is artificial and he is just portraying himself as the supreme leader of Indian Muslims.

He is making all efforts to misinterpret the Supreme Court judgment.

But one gets the feeling that Muslim votes do not matter today in India. Gau rakshaks lynch them, but they are released on bail. They don't get jobs and now their mosque was demolished by Hindu mobs only for the land to be given to Hindus by the Supreme Court.

In Narendra Modi's government since 2014, his policy programmes are equally applicable and reaching each and every individual irrespective of caste and religion. Can anyone point out that PM Modi's programmes have not reached poor Muslims? Be it Ayushman Bharat or the Ujwala scheme.

And now a large numbers of Muslims are silently voting for the BJP. If we are banning instant talaq that does not mean we are against Muslims but against patriarchy. Instant triple talaq was already banned in many Muslim countries. They are giving a bad name to Islam.