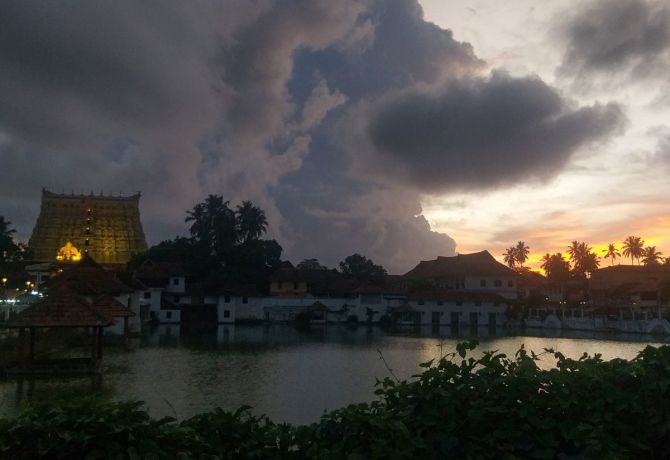 IMAGE: Dark clouds hover in the sky ahead of the monsoon season, over Sree Padmanabhaswamy temple, Thiruvananthapuram, on Saturday, May 28, 2022. Photograph: PTI Photo

Did the India meteor­ological department (IMD) declare the onset of monsoon on Sunday early, without meeting all parameters? Skymet and a few other independent forecasters seem to think so.

But it is a claim the IMD vociferously denies.

"We never compromise on science because IMD is followed not just by some private weathermen but across the globe by several reputed institutions; and we are known for our scientific rigour when it comes to making predictions, forecasts and mapping weather patterns," IMD Director General Mrutyunjay Mohapatra said.

In a statement issued on Monday, private weather forecasting agency Skymet said that IMD had, while declaring the onset of monsoon over the Kerala coast on Sunday, based its decision on wind speeds and OLR (outgoing longwave radiation) for the last two days.

However, when it came to rainfall, the most important and visible manifestation, its data shows that the criterion was not met for the required two days necessary to declare a proper onset of monsoon, Skymet said.

'Onset conditions were fulfilled only for one day, May 29. Day prior (May 28) and day later (May 30) only 40 per cent of the designated stations met the rainfall criteria,' Skymet said in the statement.

'Declaring monsoon based on single day observations amounts to gross violation of standards, never attempted in the past,' Skymet alleged, saying that any reputed scientific body can ill afford to bend rules and criteria just to prove the forecast right.

'Such a step, if taken knowingly, becomes highly objectionable and if otherwise, amounts to an illusion of knowledge,' the private forecaster stated.

Skymet further said that according to its observation and parameters, monsoon hadn't yet arrived over the Kerala coast, and even on May 30, seven out of the 14 earmarked stations had recorded nil rainfall and two more locations had registered less than 1mm rainfall.

Most locations with a fair amount of sunshine fail to give the monsoon feel, Skymet added.

Skymet's claims were supported by a few other independent weather forecasters on social media who questioned IMD's declaration that the monsoon had arrived on Sunday.

Countering these allegations, IMD DG Mohapatra said that the met department's press statement, issued on Monday, clearly mentions that the rainfall criterion has been met for two consecutive days prior to the onset declaration.

"Now if someone says that rainfall across all the stations should happen with the same strength for all the days, it isn't possible," he said.

To this, Mahesh Palawat, vice president, meteorology and climate change at Skymet Weather, said: "But we are following the parameters set by IMD itself to say that it hasn't met the rainfall criteria needed for onset declaration and has based its assumption on just the wind and OLR."

In its statement on Sunday, IMD had said that conditions were satisfied for declaring the onset of southwest monsoon over Kerala.

Meanwhile, amid the controversy, the IMD on Tuesday said that in the next 3-4 days, the southwest monsoon will ad­vance into some parts of central Arabian Sea, remaining parts of Kerala, some more parts of Tamil Nadu, Karnataka, south and Central Bay of Bengal, besides some parts of northeast Bay of Bengal and the Northeastern states. 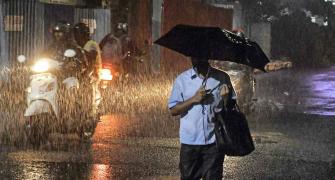 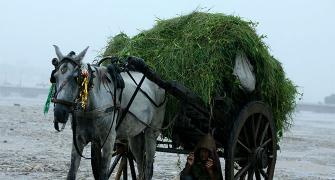 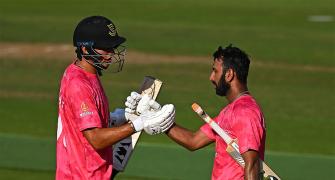