SEE: Cops sing 'We shall overcome' during lockdown

They are singing the iconic song "We shall overcome" and encouraging the audience to sing along with them.

It sounds very normal, doesn't it?

Well, the singers are Kolkata Police officials who, in a bid to uplift the spirits of the people confined at home by the lockdown, have worn a different hat.

The men in white uniform, known for their no-nonsense approach while maintaining law and order, used their public address system to sing "We shall overcome" from the streets of Entally area in central Kolkata.

WATCH: Kolkata police sing 'We shall overcome' during lockdown

Coaxed by them, people wearing masks crooned along with the police personnel and clapped with the rhythm from inside their homes or balconies.

They are also seen recording the unusual concert in their mobile phones.

In the video shared by the top cop, a police officer was heard singing the song while his colleagues joined in chorus. Another official was cheering residents of an apartment block.

"People are in a gloomy mood these days due to the lockdown. We thought of doing something to help lift their spirits. The response has been very encouraging. People came out to the balconies, clapped and joined the chorus," a senior police official said.

In Gariahat area of south Kolkata, the police organised a similar show in residential areas, where police officers sang a popular number "Bela Bose" by filmmaker- singer Anjan Dutta and cheered residents of the area. 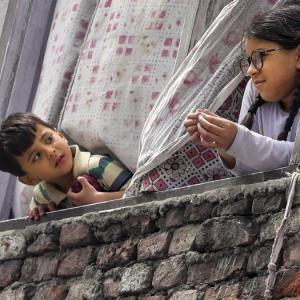