'Others have rights too': Shaheen Bagh mediators meet protesters

There were tears and defiance too as the women of Shaheen Bagh poured their hearts out to the two Supreme Court appointed interlocutors on Wednesday, the first attempt to reach out to those sitting in protest against the citizenship amendment legislation for more than two months.

IMAGE: Supreme Court appointed interlocutors Sanjay Hegde and Sadhna Ramchandran interacts with the protesters at the site of their ongoing agitation against CAA and NRC at Shaheen Bagh in New Delhi. Photograph: Ravi Choudhary/PTI Photo

Advocates Sanjay Hegde and Sadhana Ramachandran as well as former bureaucrat Wajahat Habibullah went to Shaheen Bagh, the epicentre of the anti-Citizenship (Amendment) Act protests, to speak to the women and attempt to find a way out of the impasse.

Many said they would clear the protest site only after the CAA, the National Register of Citizens and the National Population Register were removed.

"The Supreme Court has upheld your right to protest. But other citizens also have their rights and those should also be maintained," Ramachandran told the crowd assembled at the spot in south Delhi in large numbers.

"We want to find a solution to the problem together. We will listen to everyone," she said in Hindi.

Responding to the concerns raised by the women, Ramachandran said all the points will be put forward before the Supreme Court and discussed in detail.

"However, I want to say one thing. A country that has daughters like you can never face any threats," Ramachandran said, adding "liberty lies in the hearts of the people".

Hegde explained in detail the Supreme Court order to the crowds.

This was translated into Hindi by Ramachandran.

On Monday, the Supreme Court observed that the blockade of the road at Shaheen Bagh was "troubling" and suggested the protesters go to another site where no public place would be blocked.

It, however, upheld their right to protest.

The apex court also asked Hegde to "play a constructive role as an interlocutor" to persuade the protesters to move to an alternative site.

It said the interlocutors could seek Habibullah's assistance.

The sit-in, which has been going on since December 16, has blocked a critical arterial road connecting Delhi and Noida, causing trouble to commuters and schoolchildren.

The women, young and old, tried to explain their point of view to the interlocutors. 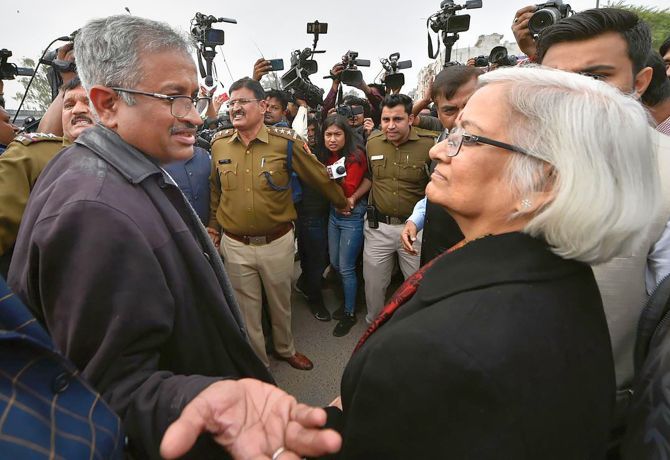 Bilkis, one of the feisty 'dadis' who has been demonstrating against the CAA since it began, declared they wouldn't move an inch even if someone fires a gun.

The wizened elderly woman said the main tent where the podium has been erected covers only 100 to 150 metres of the road.

"We have not blocked the whole stretch. It is Delhi Police which barricaded the whole road in the name of security. Why don't you get that removed first? We never asked police or any authority to block the roads for us. It is they who did it and are now blaming us for the blockade," she argued.

A defiant Bilkis said they will not move until the CAA is repealed.

"They call us traitors. When we pushed Britishers out of the country, who are Narendra Modi and Amit Shah? We won't move an inch even if someone fires at us. You remove NRC and CAA, we will clear the site in no time," she said as the crowd of about 100 people cheered on.

Another woman broke down while talking to the mediators.

She said they are protesting to save the Constitution but people see only the inconvenience of commuters who have the option of taking so many other roads.

"Aren't we facing inconvenience sitting here in cold nights, without food, taking our children to the protest? We are ourselves so troubled, what trouble will we cause to citizens?"

She said the allegations that they are not letting ambulances pass and vehicles pass are baseless.

"The road hasn't been blocked by us. In fact, it is the Centre that has blocked freedom in this country," she added.

Another woman described their ongoing protest as mental trauma. She said they jump up even at the slightest noise at night, fearing police action.

"We are unable to sleep at night and every woman is scared here. Our religion does not allow us to commit suicide but each day is killing us. Our condition is like patients who seek mercy killings," she said.

Many women said they had been living in the area since generations.

"We are not infiltrators who will move," she said.

Ruksar, a resident of Batla House, said, "This government only dictates. The same PM was crying buckets that he feels for Muslim women and brought the triple talaq bill. They were searching for affected Muslim women to give justice. Here we are sitting in hundreds, give us justice now."

Another woman told the mediators, "The SC took cognizance of the infant, Mohd Jahan, who died but what about the deaths of hundreds of children due to malnutrition and poor health care? Why doesn't the court take cognizance of those deaths?"

The woman also pointed at an ambulance passing by the protest site when the interlocutors were interacting with the protesters.

The talks, which lasted for almost three hours, will continue on Thursday. 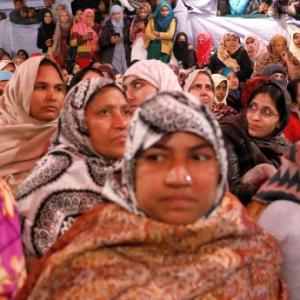