Expelled All India Anna Dravida Munnetra Kazhagam leader V K Sasikala was set free on Wednesday by authorities after she completed four years imprisonment in a jail here in a case of disproportionate assets, setting off celebrations by her supporters in Tamil Nadu and Karnataka. 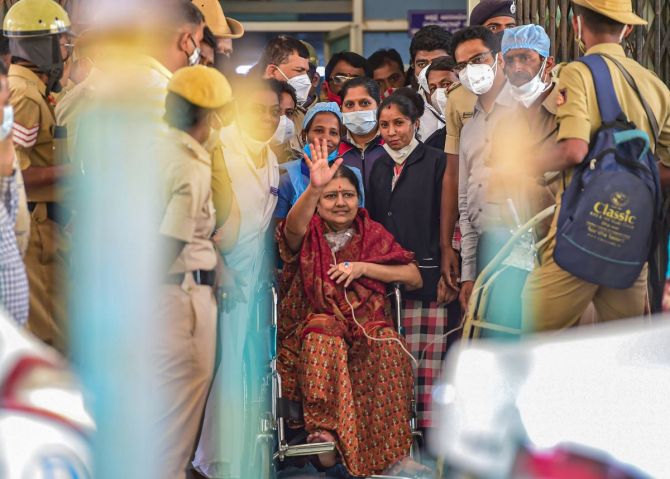 Being treated for COVID-19 for a week, the 66-year-old close aide of former Tamil Nadu Chief Minister late J Jayalalithaa, would remain in a state-run hospital in Bengaluru for some more days.

Parappana Agrahara Jail Superintendent V Sheshamurthy told PTI that Sasikala, lodged in the prison on February 15, 2017, was released on Wednesday.

Sasikala's supporters burst into celebrations distributing sweets and offering prayers in places of worship as they expect her to gain control of the AIADMK, from which she was expelled as interim general secretary.

Her counsel Raja Senthoor Pandian told reporters that she asked him to convey to the Tamil Nadu people that she would meet them soon.

He said the security put in place for her at the Victoria Hospital was withdrawn after authorities set her free.

Expressing joy over his aunt's release, Amma Makkal Munnetra Kazhagam general secretary T T V Dinakaran said Sasikala was being given good treatment at the hospital and depending on the doctors' advise she may remain there for some time.

"Tamil Nadu people and our functionaries are expecting her and a grand reception is on the cards for her," he said.

To a question, he said the purpose of floating the AMMK years ago was to retrieve the AIADMK and usher in 'true' Amma's government in Tamil Nadu and efforts aimed at it continued to be on.

"Chinnamma (as Sasikala is called by her supporters), is coming back. We will form Amma's (Jayalalithaa's) government in Tamil Nadu," he said.

The ruling AIADMK, led by Deputy Chief Minister O Panneeerselvam and Chief Minister K Palaniswami had time and again asserted that there was no scope for Sasikala being inducted again in the party.

The formalities for Sasikala's release were done at the Victoria Hospital, where she is undergoing treatment for COVID-19 along with her sister-in-law J Ilavarasi, also a convict in the case.

However, she would remain at the hospital for at least another three days as mandated under the COVID-19 protocol, though she is now asymptomatic and her symptoms have reduced.

"As per protocol, she will be discharged on 10th day (January 30) if she is asymptomatic and free for oxygen support for at least three days," the hospital said in an official bulletin.

A large number of supporters of Sasikala lined up outside the Victoria Hospital, raised slogans in her favour and distributed sweets in celebration.

Dinakaran, also an independent legislator in Tamil Nadu, visited the hospital after she was released by jail officials.

After Jayalalithaa's death in December 2016, Sasikala was all set to become the Chief Minister in early 2017 with the party naming her interim general secretary and following her election as AIADMK legislature party leader.

However, with the Supreme Court restoring the trial court's judgment convicting her in the assets case, she facilitated the election of K Palaniswami as the AIADMK legislature party leader and made him the chief minister.

Before heading to the prison in Bengaluru, she had visited the mausoleum of Jayalalithaa in Chennai and made a dramatic vow, though she did not openly declare what it was all about.

Along with Ilavarasi and late Jayalalithaa's disowned foster son V N Sudhakaran, she was convicted in the Rs 66 crore disproportionate assets case, which bars her from contesting elections for six years from the date of her release.

The September 27, 2014, order of the Special Court awarding imprisonment and a fine of Rs 10 crore each, was upheld by the Supreme Court on February 14, 2017.