A stretch of the road closed for over two months in Shaheen Bagh due to an anti-citizenship law protest was "opened" by a group of demonstrators on Saturday, only to be closed after some time, police said.

IMAGE: Noida-Delhi road was briefly opened and shut again which has been closed for 69 days due to protest at Shaheen Bagh. Photograph: ANI Photo

"Road number 9 in Shaheen Bagh was reopened by a group of protesters, but later it was closed by another group," Deputy Commissioner of Police (Southeast) R P Meena said.

Protesters claimed that they "opened" the stretch, which would allow passage to commuters between Noida and South Delhi, at around 5 pm near the protest site, but the Delhi police and the Noida police were continuing to barricade it from one side.

The road, which connects Noida to south east Delhi and further to Faridabad in Haryana, was closed for traffic in the wake of the anti-Citizenship (Amendment) Act protest at Shaheen Bagh since December 15.

The development came after three days of talks between the Supreme Court-appointed interlocutors -- senior advocates Sanjay Hegde and Sadhana Ramachandran -- and the protesters over the issue of difficulty to commuters due to blocking of roads.

According to the police, the protesters briefly opened a small portion of a road leading to Kalindi Kunj so that locals can pass through it with their two wheelers.

The Noida Traffic Police, however, also continued the restrictions on the Uttar Pradesh side of the road, an official said.

"It was being alleged repeatedly that the protestors have blocked the Kalindi Kunj road, which leads to Noida Sector 37. So, today it was decided that this allegation has to be done away with and the route was opened," Sonu Warsi, a protester, said.

"The decision was also taken to give a gift to the Supreme Court-appointed interlocutors, whose interaction and mediation has helped reopen the case. We have opened the road and it is now up to the Delhi Police and UP police to decide which vehicles they will allow," he added.

After the talks on Friday, Hegde had said the protesters, in principle, were not fundamentally against opening of the non-protest side of the road if their security could be guaranteed in writing by the Delhi Police under suitable orders of the apex court.

"We will not be holding a public interaction tomorrow to enable the protesters to come to an independent conclusion as to the way forward. We will return on Sunday only if we deem it necessary and feasible to do so," he had said. 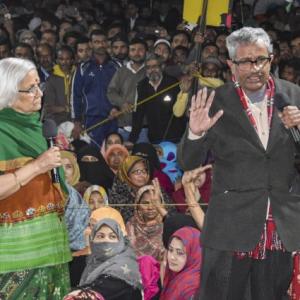