V K Sasikala, who was eased out of the AIADMK years ago, on Saturday paid homage at the mausoleum of former party supremo J Jayalalithaa here and cryptically remarked that she has 'unburdened' herself and the party has a bright future. 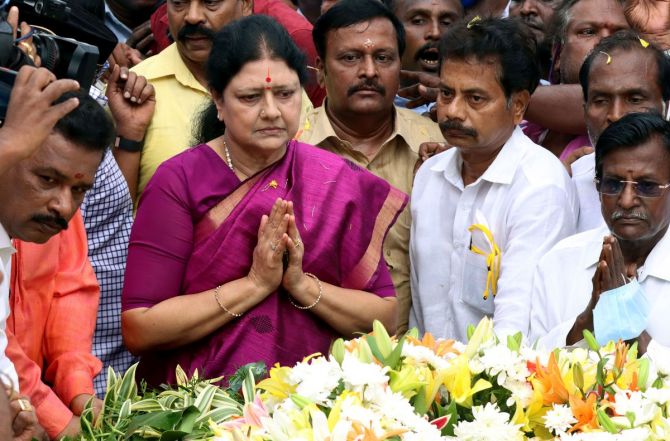 On the eve of AIADMK's 50th anniversary of its founding, Sasikala, confidante of the former chief minister said she 'unburdened' herself to Amma, the 'burden' of her heart, that lingered for about five years after Jayalalaithaa's death in 2016.

"I have unburdened myself (at the mausoleum of Jayalalithaa)," she said after paying homage, adding she 'told Amma' the happenings over the years and that the party has a bright future.

The party founder M G Ramachandran and late supremo Jayalalithaa lived for party workers and the people of Tamil Nadu and she was confident that they would "save the party and cadres."

While paying homage, Sasikala, who appeared emotional and meditative, closed her eyes and also paid floral tributes at the mausoleums of MGR and Dravidian icon CN Annadurai and offered prayers at a temple.

Sasikala, who made a public appearance after months was welcomed by a large number of her supporters who chanted slogans like "Puratchi Thai Chinnamma" (Revolutionary mother, the younger mother) and 'Kazhaga Kaval Theivam' (Guardian angel of the party) and 'Thiayaga Thalaivi' (Leader of sacrifices). Her supporters also visited her at her T Nagar residence here and reiterated their support.

While she travelled in a car, the bonnet of which sported an AIADMK flag, several of her supporters too waved the official flag of the main opposition party.

On her visit, much publicised by her supporters, AIADMK senior leader D Jayakumar said it was of no significance as she neither enjoyed the support of party workers nor the people.

Scores of people everyday visited the mausoleum of Jayalalithaa to pay homage, and Sasikala is one among them, he said.

"No one will regard this as a historic event. Her visit will have no impact."

On use of AIADMK's party flag, Jayakumar said his party had always opposed it, adding she has no moral right to use it.

The AIADMK leader said Sasikala and her clan are a 'rejected' lot and their attempt to create 'confusion' and derive mileage to 'take control' of the party would remain a daydream.

She may choose to go with the Amma Makkal Munnetra Kazhagam steered by her nephew TTV Dhinakaran, he said.

On Sasikala's visit, political commentator Sumanth Raman told PTI, "this might may be a formal way of announcing a gradual return to politics. Now, it looks like she may want to make a political comeback. But I don't know how successful it will be."

The mausoleum of Jayalalithaa was decked up with an assortment of flowers and the late leader's catchphrase 'Makkalal Nan Makkalukkagavey Nan' (I am by the people, for the people) engraved on the tombstone was also decorated with choicest flowers. 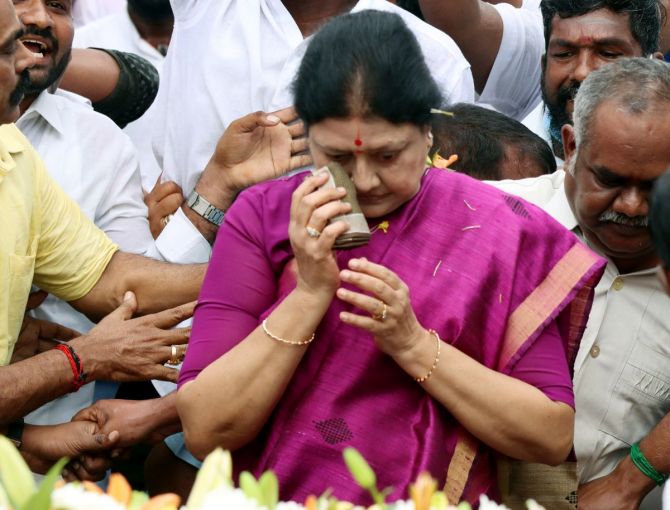 Sasikala had previously visited the mausoleum in February 2017 just ahead of her incarceration in a disproportionate assets case in a Bengaluru prison.

Her visit, before getting jailed was debated as she thumped on the mausoleum and it was also seen by some, including her supporters, as taking an 'oath' for a successful comeback.

She returned to Tamil Nadu on February 8, 2021 after completing her four year sentence.

Speaking to reporters, Sasikala said everyone knew why she was visiting the mausoleum after a "delay", apparently referring to the closure of the samadhi for 'renovation' during her return and the pandemic as well.

A maximum period of her life was spent with 'Amma,' she said, adding she was never away from the leader till she was alive.
A case filed by her, challenging the 2017 AIADMK general council resolutions, including removing her from the post of interim general secretary, is pending in a city court.

Though she had announced ahead of the April 6 Assembly election, that she would stay away from politics, in May she hinted at resumption of efforts to regain control of the AIADMK.

Audio clips of her interactions with her supporters and some AIADMK workers also surfaced following which AIADMK men faced action.

While the AIADMK, founded on October 17, 1972, has lined up events on Sunday, to mark the commencement of year long (2021-22) celebrations to commemorate the golden jubilee of its founding, Sasikala is likely to visit the MGR memorial here the same day and also visit the party founder's Ramapuram garden residence. 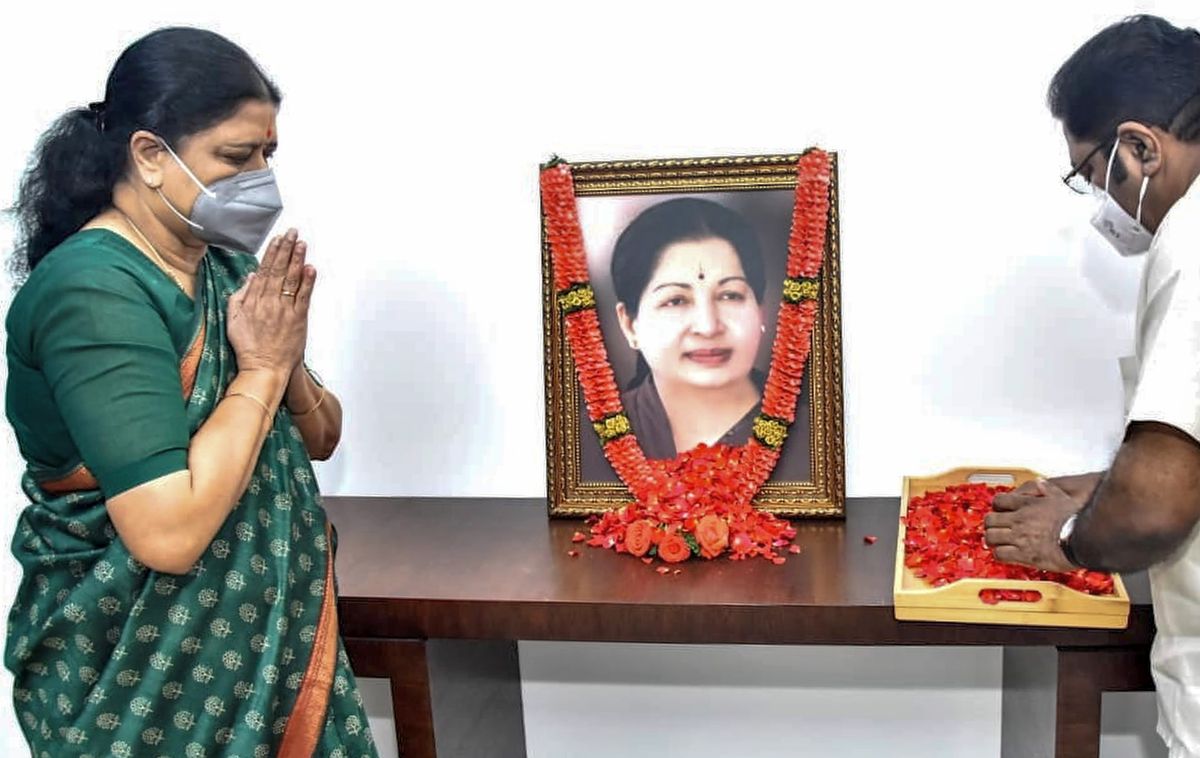