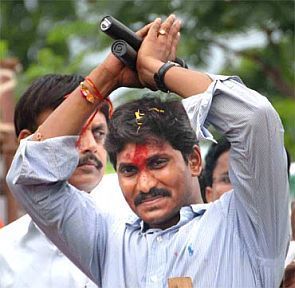 YSR Congress president Y S Jaganmohan Reddy, who was shifted to a government hospital in Hyderabad from jail following a five day-long indefinite fast against bifurcation of Andhra Pradesh, has refused to be put on intravenous fluids, doctors said.

The sugar levels of Reddy have come down due to the fast though other parameters like blood pressure were normal on Saturday morning, they said.

He has refused to be put on intravenous fluids, they said.

The police on Thursday night shifted Jaganmohan Reddy from the Chanchalguda jail here to the state-run Osmania General Hospital amid heavy security.

The jailed Kadapa member of Parliament, who has been lodged at the Chanchalguda Central Prison since May last year after his arrest by the Central Bureau of Investigation on corruption charges, launched an indefinite fast last Sunday.

Meanwhile, the YSR Congress has appealed to its president to withdraw his indefinite fast "as the there are many battles to be fought against the insensitive government in the days to come."

"The Political Affairs Committee of the party met today and resolved to appeal to Jagan to withdraw his fast in the larger interests of the people and appealed to the cadre to refrain rpt refrain from any serious action," Party Honorary President Y S Vijayamma and senior Party leader Konatala Ramakrisha told mediapersons.

As Jagan’s sugar levels are dipping fast and may damage the organs as well, the PAC took a decision to appeal to him to withdraw his fast, they said.

"The resolution adopted by PAC will be sent to Jagan Mohan Reddy and I will write a letter along with it, if there is permission. We have also moved the court to allow either his wife Y S Bharathi or I to accompany him while on fast and the reply is awaited," Vijayamma said.