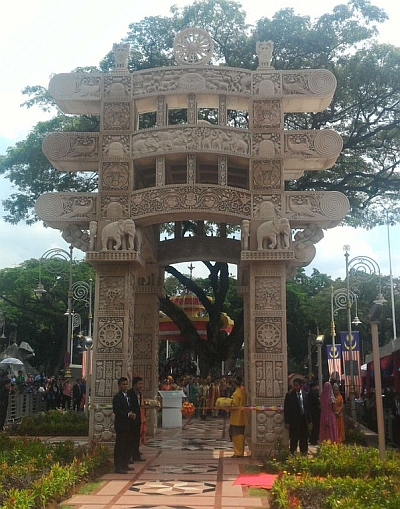 An intricately carved gateway, built at a cost of over $1 million and representing hundreds of years of Buddhist and Islamic art forms in India, was inaugurated by Prime Minister Narendra Modi in 'Little India' in Kuala Lumpur on Monday.

The Torana Gate is a gift from India to mark the launch of Kuala Lumpur's 'Little India' project as a symbol of friendship between the two countries.

Inaugurating the Torana Gate, Prime Minister Modi said: "This will be a milestone in our relations with Malaysia. Torana Gate is not an art piece sculpted in stone. It is a connection between two great countries & will become a tourist attraction."

"Torana Gate is a symbol of India-Malaysia friendship. It offers a gateway to one of the oldest civilisations," he said.

According to a statement from the Federal Territories Ministry, 'Little India' was chosen as a suitable site for the gate because the place was amongst the earliest Indian community's settlement in this country.

"The Torana Gate herein augments the cultural characteristics of the local people of Indian origin. It could serve as yet another tourist attraction of domestic and foreign significance.

"Torana Gate is not only a symbol of the friendship between India and Malaysia, but it is also a symbol of unity and understanding amidst established ethnic diversity in Malaysia," said the statement.